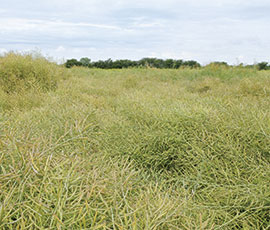 The industry needs to work together in managing phoma in order to protect key resistance genes in oilseed rape varieties, according to one scientist.

The concern is that the current approach to oilseed rape growing is putting high pressure on resistance.

Speaking at the event, Bruce Fitt, a plant pathologist at the University of Hertfordshire, challenged delegates and the HGCA to work together to protect variety resistance to phoma, highlighting initiatives in other countries such as Australia.

Phoma stem canker is the second most costly disease for oilseed rape growers in England, amounting to losses of more than £140m in 2010.

An important control strategy is the effective deployment of single genes for resistance. New sources of resistance are very effective when first introduced into commercial cultivars, but are often not durable as single genes, as recently shown in Australia where a variety broke down after two years with 90% yield loss.

To better understand variety resistance in the UK, an ongoing BBSRC LINK project is investigating factors affecting resistance under field conditions. This includes looking at the different races of the phoma pathogen Leptosphaeria maculans across nine sites

to assess their virulance against different oilseed rape resistance genes.

“We found that the pathogen was generally virulant against all but three of the resistance genes [RLm5, 6 and 7]. Of these only RLm7 is widely deployed in the UK,” explained Prof Fitt.

“The industry, including farmers, breeders and researchers, needs to work together to protect the gene,” he said.

If the regional distribution of pathogen races is monitored, then farmers can be advised to grow varieties with resistance that is effective in their area.

Prof Fitt highlighted the Australian scheme aimed at managing resistance. Varieties are grouped (A to G) and growers are urged to rotate between groups.

“Similar schemes are operating in France and Canada,” he said.