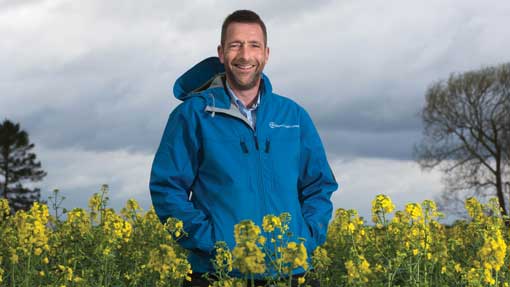 Chosing an oilseed rape variety with high resistance to phoma stem canker could potentially cut the number of autumn fungicide sprays and allow growers to focus their attention on controlling light leaf spot.

Bayer CropScience highlighted that its new variety Harper has the highest phoma disease resistance rating on the HGCA East/West Recommended List with a score of 9.

Darren Adkins (pictured), a commercial technical manager with the group, explained that growers typically target phoma with a fungicide in October once the threshold of 10% of plants infected is reached, and then a second spray may be needed if infection appears on new foliage.

The second spray timing coincides with growers looking to control light leaf spot, so a variety with high phoma resistance can leave growers to focus on light leaf spot control.

“It means growers can delay their first fungicide spray until the first signs of light leaf spot infecton are seen,“ Mr Adkins said at a Bayer trials demonstration at R&R Farms, Scothern, just north east of Lincoln, earlier this month.

Typically this timing would coincide with blackgrass control with a residual herbicide such as Kerb (propyzamide), or Crawler (carbetamex) in November and December.

Harper has a disease resistance score of 5 for light leaf spot, with the majority of varieties on HGCA East/West Recommended List between 4 and 6.

The variety, which was included in the HGCA list last December, has good standing ability especially in the wet and difficult 2012 season and demonstrated good vigour in the autumn and spring, Bayer says.