Worceshire-based contractor Dave Marshall of CB & SJ Marshall was having problems harvesting land-locked fields on Edward Muntz’s Umberslade Estate, Hockley Heath near Solihull because the fields were so saturated.

The Lexion 460 combine was moving – because it is on tracks – but the difficulty was getting the grain trailers out of the field as there were no hard-standing and only soft ground.

He solved it by hiring in a Bell B30D dump truck which has a capacity of about 30t but very low ground pressure. The machine is pictured here working on 14 September.

Andy Jenkins, from the firm who hired the truck, said: “The machine, even when loaded with a higher capacity load than I was told their conventional tractor and grain trailer could move, barely left a mark on the soft ground in their fields. It certainly didn’t cause ruts or get bogged down (or risk overturning) as a standard tractor/trailer outfit would have done.” 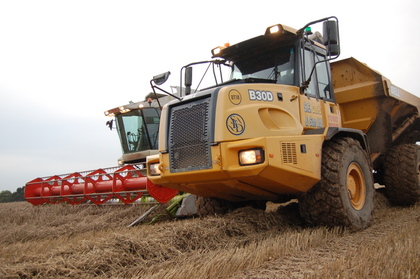 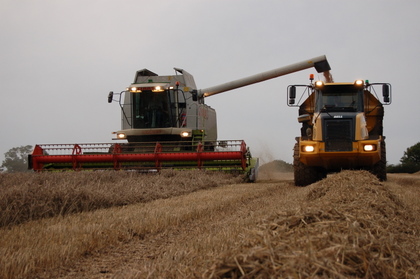 What do you think of such a move. Add your comments on FWiSpace under this picture on the gallery.