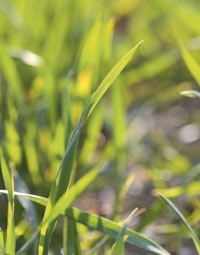 Cereals able to make their own nitrogen could become a reality after a scientific breakthrough in root nodule research.

Cereal crop production could be revolutionisedif a project to produce nitrogen-fixing non-legumes is successful.

Scientists at the John Innes Centre, Norwich and Washington State University, USA, are researching the possibility of growing root nodules, a key element of the nitrogen fixing process, on non-legume crops such as wheat, rice and maize.

If achieved, the technology could allow these crops to convert inert atmospheric nitrogen into organic compounds for growth, says Giles Oldroyd, research leader.

“The technology could dramatically reduce the need for inorganic nitrogen fertilisers, in turn reducing environmental pollution and energy use. Cost savings for the grower and consumer would also be substantial.”

Nitrogen fixation occurs naturally in legumes. Understanding the processes that activate nodulation is the first step in transferring the trait to non-legumes, he says.

“Root nodule formulation is triggered when legumes sense the presence of nitrogen-fixing bacteria. Once nodules form, these bacteria are able to begin the nitrogen fixation process.

“We have identified a key gene that legumes require to interact with rhizobial bacteria and trigger nodule growth.”

By manipulating the gene (DMI3), nodules have been forced to grow in the absence of bacteria. “This has given us a good understanding on the genetic switches behind the process.”

Matching these genetic switches in non-legumes is the next stage, says Dr Oldroyd. “DMI3 is present in cereal crops, but parts of the signal pathway are missing. We need to work out how to complete this, how to switch it on and at what time.”

Nitrogen fixation requires large amounts of energy, which could stress cereal crops, he adds. “Reduced yields could be a consequence, but it is likely breeding will be more advanced and able to compensate.”

There is still a great deal of work to do. “Within the next 20-30 years I would hope to see a response. It has taken 60m years to get to this stage naturally, so the process will take a great deal of refinement.”

A breakthrough in wheat breeding research means modern varieties could benefit from traits such as drought tolerance and disease resistance found in wild relatives.

A drug, normally associated with treating mammals, has been identified which could temporarily break the genetic structure of wheat allowing new genes to be introduced.

Deleting Ph1 is possible and does allow genes to pair and recombine, but resulting breeds would be being genetically weak and would have poor fertility, he says.

“Using the drug, we are hoping to temporarily switch off Ph1 allowing pairing to take place without compromising genetic stability.”