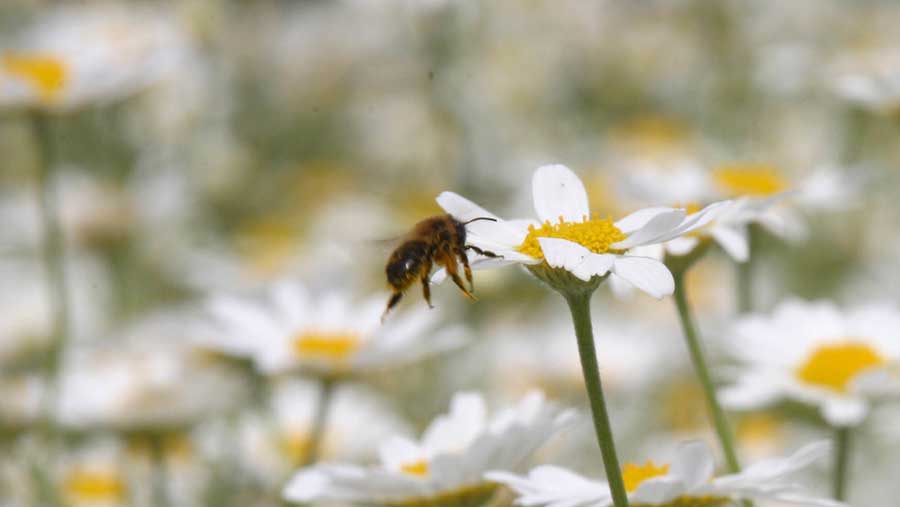 In Hungary, honey bee colonies near winter-sown oilseed rape treated with clothianidin were found to have 24% fewer workers the following spring. Similar results were recorded in the UK.

By contrast, the study in Germany found no harmful effects on overwintering bees. Hives were larger and showed little evidence of disease – and bees had access to a wider range of wildflowers to feed on.

Lead author Ben Woodcock, from the Centre for Ecology & Hydrology, told Farmers Weekly this could explain why there was no evidence of a negative effect of neonics on honeybees in the German trials.

“In my opinion, providing better habitats in the farming landscape will establish robust bee populations and if we have these, the subtle impacts of neonicotinoids are likely to have less impact,” said Dr Woodcock.

“There is a strong suggestion that if farmers can provide good foraging sources for bees, they are more likely to be able to deal with neonicotinoids.”

More research is now needed to study the effects on bees of neonicotinoid-treated OSR crops planted alongside wildflower margins, he added.

The European Commission introduced a temporary ban on the use of three neonicotinoids on flowering crops, including OSR, in 2013. The commission is coming under pressure from environmentalists to impose a total ban, but farmers say this would be unjustified.

NFU vice-president Guy Smith said farmers can strengthen the case to retain neonics for use in certain situations by planting more wildflowers on farms.

Mr Smith said he would be establishing more pollen-rich margins to improve overall bee health on his farm in St Osyth, Essex – and he urged others to do the same.

“This seems timely for next year when I’m no longer going to put peas and beans into my EFA [ecological focus area] requirement because of the spray ban on these areas,” he added.

“It makes sense to place [wildflower pollen and nectar mixes] on my old ELS margins that have now come to an end. For me, this is a positive solution to what has become a rather negative media situation.

“It’s a solution that works for the future use of neonicotinoids, works for my bank balance, works for farming’s PR – and above all, works for bees.”