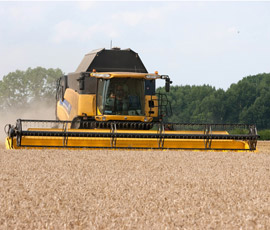 Guy Hildred has made good inroads into his wheat harvest at Icknield Farm, Wallingford, Oxfordshire, and is delighted with yields, too.

So far he had cut 53ha of Crusoe winter wheat for seed, which had yielded over 9t/ha, with even the second wheat producing 8.5-9t/ha.

“It’s not too shabby – something of a pleasant surprise,” he said. Having drilled most of his wheat in August, he escaped the worst of the wet autumn last year, and bushel weights were good, at 76-80kg/hl.

Oilseed rape was much more disappointing, producing a poor average yield of 3.2t/ha.

“Because it’s an early variety it was through the danger stage when we had the hot, dry weather in June.”