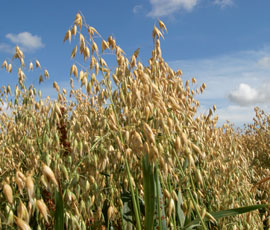 “It’s been a bit of a struggle this year – we’re two weeks behind where we’d like to be,” he said.

Yields were all 25-30% below the 10-year farm average, with Cracker oilseed rape doing even worse than that, at 2.5t/ha against a more normal 4.3t/ha.

“It’s just down to the lack of sunshine when it should have been pollinating,” said Mr Fowlie.

Although the weather had been stop-start, it was the lateness of crops that had delayed harvest, not the lack of dry weather.

“We’re used to the weather in Aberdeenshire – it hasn’t held us up any more than normal. But it is too wet to drill at the moment.

“And it’s teeming down with rain tonight – although we got on combining this morning I’m not sure if we’ll be back on tomorrow.”

Winter barley did well, at 7.4t/ha, and all the spring barley made the malting grade, although the later drilled crops did not do so well, said Mr Fowlie.

“The good prices are helping, although costs are going up and up.”

Wheat had produced a nice sample so far, having come off at 21-24% moisture. “We’ve got 80ha of wheat and 50ha of oats to cut – we might finish in the next eight to 10 days, weather permitting.

“We are trying to sow winter barley at the moment, but it will be the start of next week before we finish that.”