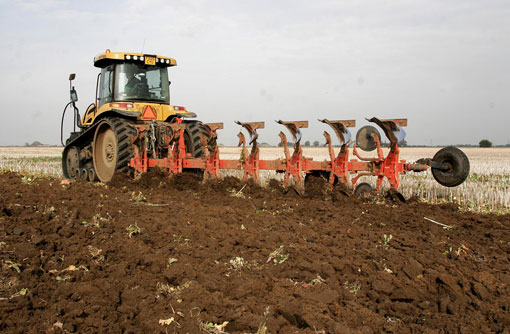 The long-term effects of different cultivation systems on crop yields are starting to become clear in a major trial. Louise Impey looks at the latest figures

Highest crop yields across all the combinable crops in a long-term trial continue to come from a plough-based cultivations system, according to the latest results from the STAR project, a rotational study being carried out in Suffolk by NIAB TAG.

“But where non-inversion tillage was used, the continuous wheats didn’t fare as well,” he explains. “Yields were down to between 6-7t/ha, which was mainly due to weed competition. The very heavy herbicide hits needed probably had a detrimental effect too.”

Margins followed the same path, with better figures coming from ploughed and deep tillage approaches. “There’s no doubt that last year’s dry spring really pulled them apart. On that basis, this year’s results could be even more telling.”

But, with the project now in its sixth year, the long-term trends show that the best margins are coming from a managed approach to cultivations, where the decision on which system to use is taken much nearer the time and is based on field conditions and soil assessments.

“That’s very reassuring,” says Mr Stobart. “It shows that there’s no substitute for local knowledge and an understanding of relevant factors such as the weed populations and previous cropping. The weather has a bearing on soil conditions too.”

The plough and deep tillage regimes are coming up very close behind, he adds. “It’s the shallow non-inversion tillage regime which is delivering the poorest performance.”

Part of the reason for that is the increasing grass weed burden, he notes. “They are a particular problem in the continuous wheat plots and numbers have really escalated in the last three to four years.”

Both brome and blackgrass are present, creating a dilemma for control timing, he adds. “Where we’ve used a pre-emergence treatment followed by a post-emergence Atlantis (mesosulfuron + iodosulfuron) follow up in the autumn, we haven’t been able to get better than 50% control of meadow brome.”

That took out most of the grass weeds, he confirms. “But it was at a cost. We spent over £100/ha on the herbicide programme, which shows in the margin.”

His colleague, weed expert John Cussans, believes that continuous wheat being grown with non-inversion tillage is unsustainable. “The grass weed problem gets too much. The only way to make it manageable is to use the plough.”

Ploughing results in 50-60% of weed seeds being lost very year, he points out. “Although you are bringing up some of the buried weed seeds when you plough, the freshest seed is being buried. It is an effective strategy.”

Where brome is a problem, leave stubbles untouched after harvest, he advises. “If brome seed is exposed to sunlight and temperature fluctuations, its dormancy is broken. That makes it easier to get good control.”

Later drilling can also be effective, but it’s seldom practical as an across the board strategy, he warns. “Drilling conditions really matter. Perhaps the best thing to do is leave the worst fields until last, rather than deciding to drill everything later.”

“But we have seen some implications of cultivations strategy. Where long-term shallow non-inversion tillage has been used, water infiltration rates are reduced. The soil is more dense and of a tighter nature, which has effects on surface drainage.

“There haven’t been any beneficial effects of deep cracking in dry summer months on the soil structure.”

In the alternate fallow rotation, Mr Morris has identified some soil structure differences. “We’re using a mustard cover crop in this rotation. Where that crop has established well, it’s been helpful to soil structure. But if it was patchy, there was harm to soil with compacted surface layers apparent.”

“Crops are very thin and there’s concern about their yield potential. Unless we get some significant rainfall, any responses to the T3 spray are going to be at the lower end of the spectrum this year.”

The roles of the ear spray are to protect grain quality and to top-up foliar disease control, he continues. “Neither appear to be a priority at this stage. No wonder growers have been asking about the use of extended T2 sprays.”

The fusarium threat, which spreads to the ear from the base of the crop by rainsplash, is considered to be low. “There’s less disease in the bottom of crops. We know that high nitrogen levels encourage fusarium infection, but much of the nitrogen applied this year hasn’t been taken up due to lack of moisture.”

Results from the STAR project do show that cropping type and cultivations can affect the amount of fusarium inoculums around and increase risk, he reports.

“Wheat following oilseed rape, spring beans or fallow is at much lower risk than crops following grain or forage maize.”

Ploughing also reduces inoculums by 75%. “That’s because the trash is buried. So in a high risk situation, it makes sense to plough.”