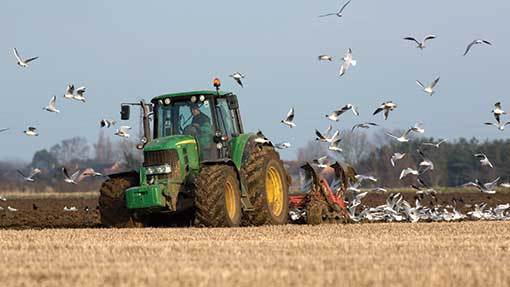 In one form or another the plough has been a mainstay in crop production for thousands of years, but in recent decades it has gone in and out of fashion.

At present it is very much “in”, with German plough manufacture Lemken reporting a 50% increase in sales last year as growers introduce the plough back into their crop rotations.

The key driver is a grassweed that has become the scourge of many arable farms across England and particularly in the east – blackgrass.

Of the cultural methods that can be helpful to growers, cultivation can provide a means of both stimulating germination of seed and burying it to prevent germination, with ploughing fitting into the latter category. 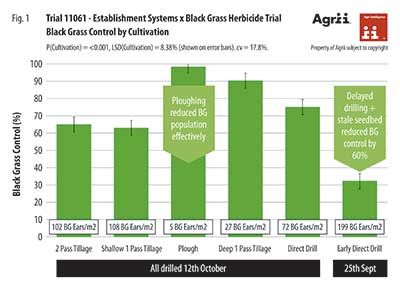 Distributor Agrii has been carrying out blackgrass control trials since 2000 at the company’s trial site on Rookery Farm, just off the A14 near the village of Stow Longa, Cambridgeshire.

For the last three years they have been looking at the effect of different cultivation and establishment methods on blackgrass populations.

On wet-lying heavy land, the significant blackgrass burden has provided Agrii’s research and development manager Colin Lloyd with the perfect location to indicate what works and what doesn’t.

The minimum tillage strategy used before 2010 aimed to keep the blackgrass seed in the germination zone to enable the use of stale seed-beds sprayed off with glyphosate.

Robust pre-emergence programmes also formed an integral part of the strategy. However, these methods were not getting on top of the problem.

“We have been fighting hard against an ever increasing herbicide resistant blackgrass burden and numbers had got so high that we had to try something else and cultural controls have become ever more important.

“Continually direct drilling or min tilling allows blackgrass numbers to increase and although these system can work, they rely on a good stale seed-bed and all the available chemistry working well,” explains Mr Lloyd.

A series of cultivation and establishment techniques were introduced in 2010-11, which included the plough alongside deep and shallow tillage and direct drilling.

In the first year that the plough was introduced, it managed to achieve a 97% reduction in blackgrass numbers on its own (see graph), with no chemical applied.

In the second year, the trial plots were split in two, with the back half ploughed and drilled and the front half direct drilled with oilseed rape.

Again, the plots that hadn’t seen the plough before achieved the best control. However, where the plough has been used twice relatively poor control was achieved.

Mr Lloyd says that has also been reinforced in subsequent years, where continuous ploughing, minimum tillage and direct drilling produced the worst results.

Rotational ploughing provided the best level of control, followed by two or three years of direct drilling to reduce the viability of the buried seed as much as possible.

When asked when growers should look to introduce the plough back in the rotation, Mr Lloyd’s answer was clear.

“Growers should be looking to bring out the plough when they are in a real pickle with blackgrass, particularly where resistance is there. Bury the seed and stick with minimal disturbance for as long as possible afterwards.

Only when you get into a pickle again and seed return is high should you plough again,” explained Mr Lloyd.

He also points out that it may not be the whole farm, so using a targeted approach on the worst blackgrass infested fields should be adopted.

Growers concerned about the initial investment in a new plough and the associated higher running costs involved with ploughing should consider the wider long-term benefits, adds Mr Lloyd.

The improved blackgrass control and subsequent yield benefits that Agrii have shown in their trial work could easily pay for the machine in the seasons following the rotational plough.

However, growers need to ensure that they are making the best possible job by setting up the plough correctly to bury all the weed seed at depth.

On heavy land Mr Lloyd acknowledges that it will take more work, but ploughing and pressing early, followed by drilling later will get the best results.

“It all sounds very painful, but the prize (of good blackgrass control) at the end is well worth it,” concludes Mr Lloyd.

The trials are continuing into a fourth year for 2013-14.