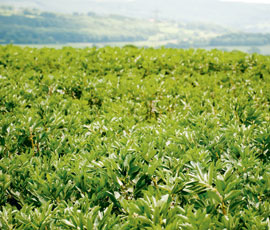 The status of organic farming had been enhanced under the latest proposals for CAP reform, said Nic Lampkin, director of the Organic Research Centre at its recent conference in Birmingham.

However, he warned that EU recognition of the environmental benefits of the system had still to be transferred to the UK.

“The automatic qualification of organic farming in the new greening element of the CAP would mean environmental benefits such that we are producing will qualify for support payments. But sadly not all bodies agree with our instant entitlement.

“In response to the current EFRA Select Committee review of the greening proposals, there was some surprising opposition from the RSBP, the National Trust and others with agri-environment schemes offering similar benefits.”

Prof Lampkin told organic growers he expected a decision by the end of this year, once the Commission reached agreement with the European Parliament and Council of Ministers.

The IFOAM EU group, representing the organic sector, is taking every opportunity to push the CAP in the right direction and show the RSPB and others the numerous benefits of organics, its president, Christopher Stopes, told delegates.

“There is no embarrassment in the rest of Europe when you mention the “O” word. We must persuade the RSBP and the National Trust that opposing organic’s qualification, a short-sighted decision, will only serve to put people off, not encourage environmental benefits. We should grab new opportunities now that organic farming has been mentioned by name in the proposals.”

Mr Stopes suggested the greening element of Pillar 1 (direct support) payments should be more ambitious than the proposals recommended. This might include a three-crop rotation, to include one protein crop such as beans, no one crop to cover a greater proportion than half of the arable area, and enhanced protection of permanent pasture.

“We have no less than 27 recommendations covering the redirection of unused direct payment funds to Pillar 2, and guidelines on a practical level, such as re-seeding pastures with a mix containing a legume,” he explained.

Choosing ley species and crops that can best benefit from the nitrogen released upon its incorporation was key to optimising organic yields, said Stephen Briggs, director of Abacus Organic Associates.

“It’s surprising how much nitrogen a good clover or legume based ley can provide. Look beyond red and white clover and you’ll find there are more than 30 different legume species that can be used in rotations to build nitrogen,” he suggested.

He urged producers to review the way they managed legumes. DEFRA-funded research suggested taking off the biomass as forage or compost gave better nitrogen fixation rates than mulching.

Incorporating low growing legumes such as clover or black medic, by undersowing in growing cereal crops, could help provide additional nitrogen to the rotation and minimise weeds, Mr Briggs said. So too could growing N fixing beans and wheat together. Overall production was greater than when grown as single crops, and combining and separating were straightforward.

He stressed the value of organic manures, which when available, could be used to promote tillering as soil mineral N falls in the spring. It was worth testing their nutrient content to improve use efficiency, he added. In a show of hands at the event, only around 10% of organic growers currently sampled and sent farmyard manure for testing.

A valuable source of phosphorus for crops, sewage sludge could in future fall within organic regulations, said Peter Vale of Severn Trent Water. This resource offered potential as a sustainable fertiliser in the form of struvite, or magnesium ammonium phosphate.

“Within a couple of years, we hope to have a UK processing plant able to recover up to 40% more phosphorus than we do at present. Struvite naturally occurs in waste water pipes, and can be formulated without added nitrogen, so there shouldn’t be a reason to exclude it from non-chemical farming systems,” he believed.

Organic producers keen to adopt non-inversion tillage to save on fuel would benefit from optimisation of machinery to boost yields and reduce weed levels, Thomas Döring of ORC, said.

“Organic farmers are innovating and developing machinery, and finding that non-inversion doesn’t always lead to weed problems. Within two years, the Tilman project should have pinpointed several ways to replace the plough with less costly cultivation practices and lower risks,” Dr Döring suggested.

In ORC’s UK trials, the non-inversion EcoDyn cultivator drill achieved good crop establishment and similar yields to a plough-based system over two seasons. This was mainly due to greater soil moisture retention with the EcoDyn in dry spring weather, he said.

‘Organic firms must keep carbon down’

Organic companies who are not looking at their carbon footprint were on a limited timescale, warned Iain Cox of sustainable development consultancy, Ecostudio, Cardiff. Customers trusted their green credentials.

“There’s no definitive solution to business sustainability – it’s a valued judgement. I suggest thinking about what customers are prepared to buy into,” he said.

Sue Fowler of Organic Centre Wales, and director of the Better Organic Business Links project, urged organic producers and other related businesses to work through a sustainable action plan like the one BOBL had introduced.

“We know organic doesn’t always mean squeaky clean when it comes to issues like waste and fuel usage, but businesses should prioritise carbon footprinting to secure their reputations. If they aren’t leading the way on sustainability, who is going to?”

The BOBL project had so far reviewed the policies of 10 local companies, providing them with scores and visual assessments of sustainability indicators. It had held forums designed to embed the changes to existing strategies, she explained.

Roger Kerr of Welsh farm co-operative, Calon Wen, said he had participated in the BOBL project, and within his plan seen some quick and some slow win opportunities.

“As a processor of locally produced milk, we didn’t build the business model on sending milk huge distances. But we are currently reviewing transportation efficiency along with packaging and water usage. Having a sustainability action plan allows us to set targets and ultimately make the business even more robust.”