New work that ranks potato varieties according to their susceptibility to wireworm feeding damage could help growers in the fight against the pest, say experts.

Two second earlies – Maris Peer and Marfona – and the maincrop variety Rooster, have been included in the most susceptible group, while pre-pack varieties, Nadine, Harmony and King Edward and all-rounder, Maris Piper, are in the least susceptible category.

“By choosing less susceptible varieties or switching varieties between fields, according to wireworm pressure, growers can manage the risk of damage,” said Scottish Agronomy’s Eric Anderson.

“On the increasing number of high wireworm risk sites, soil treatment with a nematicide can never be expected to completely eliminate damage,” he added.

Trials with a crop of Maris Piper near Dundee last year highlighted significant variability in persistence of soil treatments, he said.

“At the first dig on 8 August damage to tubers in the Mocap [ethoprophos] treated area was still below 5% whereas the Nemathorin [fosthiazate] treated area was approaching 40%. By lifting at the end of September Mocap had maintained 90% control, compared with 37% from Nemathorin.” 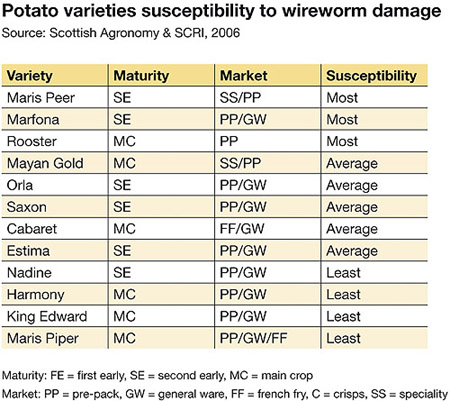