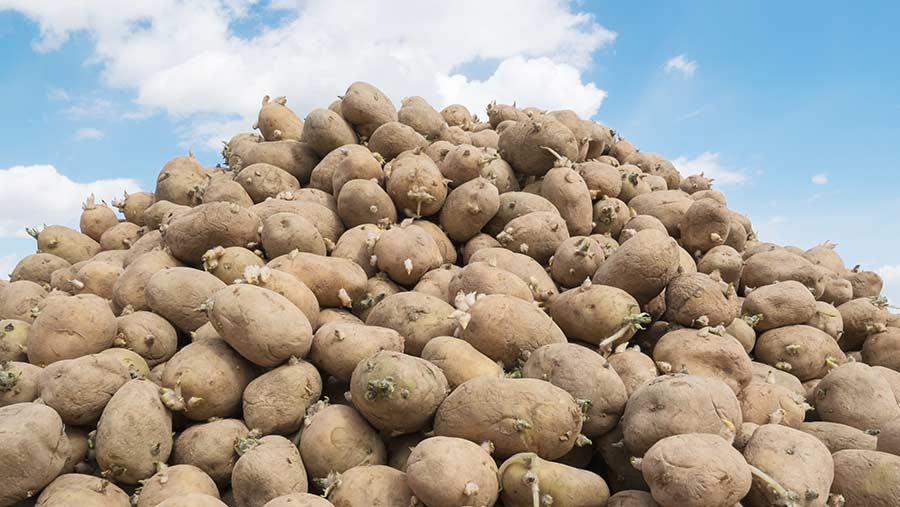 Defra has blocked large-scale imports of seed potatoes from the EU, matching the ban on British exports that has been in place since the start of the year.

Up to 10,000t of seed potatoes are imported annually from the EU for planting on British farms, while GB has traditionally exported about 30,000t/year, worth £13.5m, to mainland Europe – mostly high-health stocks from Scotland.

But, with seed potatoes not included in the post-Brexit trade deal, the trade has been one-way only for the past six months, with Brussels refusing to allow imports from GB into the EU or Northern Ireland.

NFU Scotland (NFUS) had been critical of the UK government for allowing EU seed imports to continue until the end of June, while its exports are banned.

The seed potato market is important for Scotland as 75% of the UK’s seed potatoes are grown there and the country is responsible for 80% of UK exports.

But following a change to the seed potato classification scheme, Defra has now put a bar on the sale of EU seed potatoes in GB, except on a case-by-case basis.

The veto on EU imports will have an effect, as varieties imported from the EU are different to those grown in Britain.

But NFUS hopes the decision to not extend authorisation to EU seed imports will bring “fresh impetus” to talks that could allow Scottish seed potato exports to resume.

“This will not be an easy task, as the EU Commission has made it very clear on several occasions that the seed potato trade is a casualty of Brexit,” said seed potato grower Mike Wilson, chairman of the NFUS Potatoes Working Group,

Defra says it is continuing to press the EU to reconsider its position on prohibiting imports of seed potatoes from Britain, by granting “equivalence of standards”.