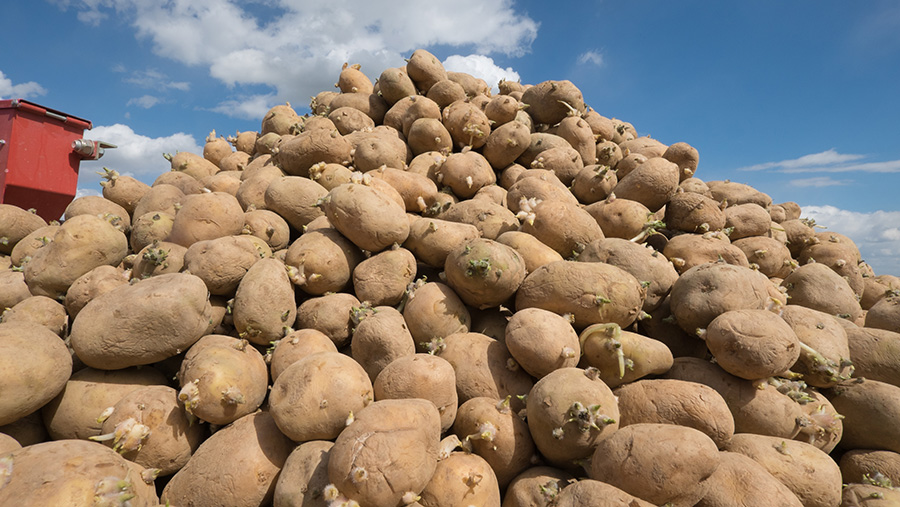 The UK government should consider a tit-for-tat response if Brussels continues to refuse access to British seed potatoes, according to farm leaders.

Scottish, English and Welsh seed potato growers and traders are still unable to export to the EU as part of the Brexit fallout, causing millions of pounds worth of losses.

The EU denied third country status for GB seed potatoes over concerns they would not remain “dynamically aligned” with the bloc’s standards on this product.

In addition to EU exports, the movement of seed potatoes from Great Britain to Northern Ireland is also banned. However, seed imports from the EU to the UK – about 28,000t each year – will continue until 30 June 2021.

At the NFU Scotland (NFUS) virtual conference on Thursday 11 February, the presidents of the UK’s four main farming unions were asked if they felt the UK should ban the importation of EU seed potatoes – if the EU failed to lift its own ban.

“There is no point in us not taking a hard line on this. We could get to a level of self-sufficiency within our own internal market,” said Mrs Batters.

“We will have to set strong terms. I think growers, on the whole, would be happy with us taking quite a hard line on this, with seed potatoes being imported if we have lost access to the EU market.”

Outgoing NFUS president Andrew McCornick said: “We have opened the door and let the horse run away on this one up until July.

“Because of the offer that we made at the end of the Brexit negotiations for this six-month agreement, I don’t think the opportunity is now. But beyond that, totally slam the door unless we can get some kind of agreement.”

Mr McCornick urged the UK government to continue to push the EU for seed potato “equivalence”, adding “there is no way Europe could argue their standards are higher than ours”.

UK potato seed growers represented by the Pre Basic Growers Association wrote to Defra this week urging it to re-engage with the EU on seed potato exports to establish a reciprocal trade agreement.

Last month, Defra secretary George Eustice told the Oxford Farming Conference there was “no scientific justification” for the ban and the government had asked Brussels to reverse it.