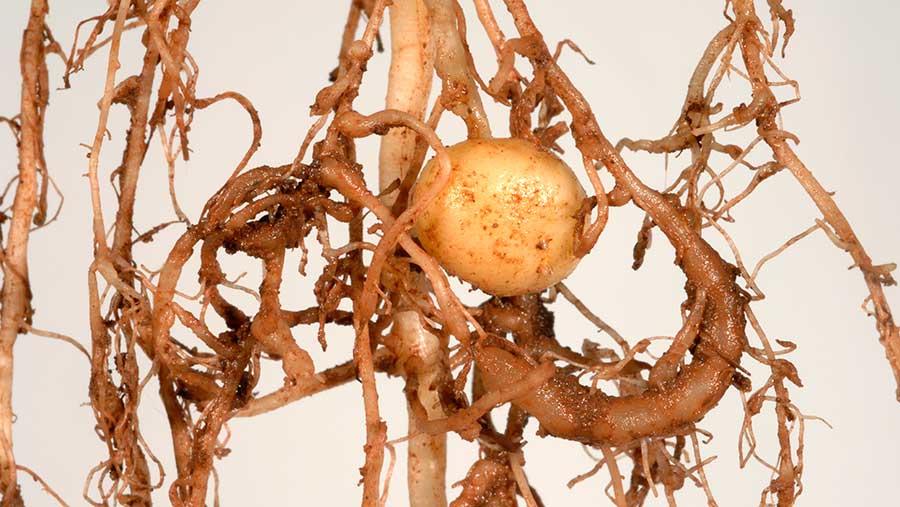 Fera Science senior nematologist Tom Prior reported an increase in the incidence of the pest in laboratory tests carried out by the organisation.

“It could be the result of an increasing awareness of the disease, tighter rotations or the greater use of cover crops,” he told Farmers Weekly at the British Potato event.

To help farmers battle this pest, Fera Science has launched a new rapid in-field test that can identify the species present in minutes.

Genie technology was first introduced for use by inspectors at airports to detect and identify pest and pathogens being imported in plant material, explained Fera scientist Catherine Harrison.

The portable device amplifies and then analyses DNA in a sample, which can then be matched to the DNA sequences of known pathogens

It takes just minutes. In contrast, current testing is lab based and takes a week to identify the pest, making it expensive.

Fera is looking to roll out the service, which will initially be aimed at agronomists.

What are root knot nematodes?

Root knot nematodes can be a hidden problem on farms, as they result in necrosis of leaves, which looks like a nutrient deficiency. Therefore, a problem may go unnoticed for some time, reducing crop yields.

The pest looks like a 0.5mm-longworm. The eggs hatch and emerge, with the larvae starting to feed on roots, resulting in the characteristic root galls.

Then, when the potato crop is lifted, the egg mass falls off onto the soil and will overwinter to hatch when conditions are favourable.

However, for effective control, identifying which species is present is vital.

Unlike potato cyst nematodes, which remain in soil for many years, numbers can decline quickly in a few seasons by making simple changes to the rotation, he said.

So by knowing which species is present, farmers can avoid growing host crops, including species in cover crop mixes.