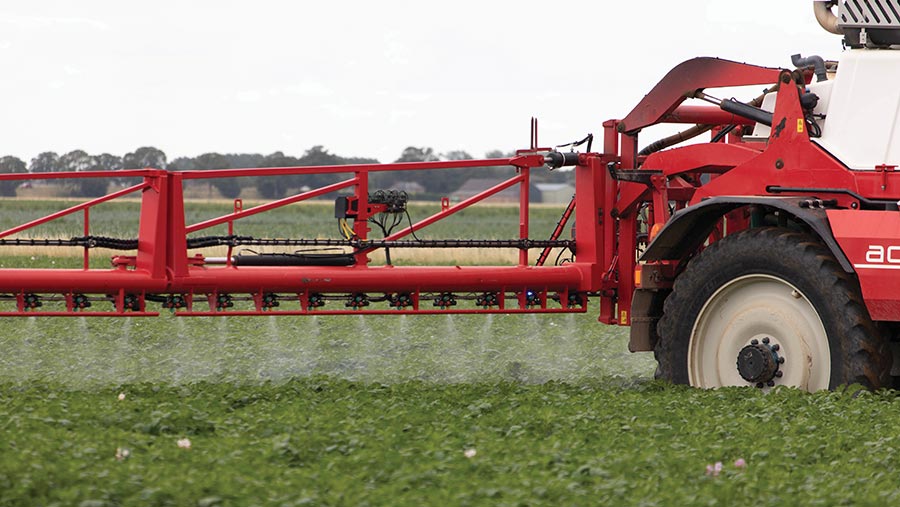 A range of new potato products will soon be available to growers, equipping them with an improved chemical armoury to control blight, weeds and soil-borne pests.

More than 10 actives have been lost in potato production in recent years, including linuron, methiocarb, diquat and pencycuron, with a further 50 actives now under threat of non-renewal.

With yield losses without crop protection hitting 34% in the field, growers are concerned over the viability of potato production going forward.

“We have invested a huge €900m (£820m) of research and development expenditure into the agricultural industry during 2020, with a particular focus on advancement in the potato sector,” he says.

Paul Goddard, stewardship and value chain manager at  the group, explains that the potato industry is in need of new fungicide innovation, particularly as blight is increasingly resistant to phenylamides, insensitivity to the multisite fluazinam heightens and the future of the multisite mancozeb becomes uncertain.

He highlights that one new fungicide product is now available on the market for blight control in potato crops, with another expected to be released in late 2021.

The use of Enervin SC is currently available to provide protection against the early stages of foliar late blight in potatoes, containing the active amectoctradin.

Mr Goddard explains that the product provides effective control against phenylamide-resistant strains of blight with no cross-resistance observed.

It has the greatest efficacy when applied as a protectant spray before the risk of late blight and should always be used in combination with another active to avoid resistance build up.

He adds that the fungicide is a good non-carboxylic acid amide or quinone outside inhibitor (QOI) mixer, to be used at an application rate of 1.2 litres/ha in 200-400 litres/ha of water, for use on all varieties of potato, including seed crops.

“Enervin SC is a single-site mode of action so must always be mixed with a robust rate of another product recommended for control of the same target disease, from a different Frac (Fungicide Resistance Action Committee) mode of action group,” he says.

Mr Goddard also points out to growers that up to six applications of a QOI fungicide can be made in a season, in a mix with another active (three in a sequence), making up a maximum of 50% of the intended number of applications.

The new BAS 657 fungicide, which is expected to be on the market in late 2021, incorporates two unique modes of action, including a multisite with built-in resistance management to reduce risk of resistance and effectively control late blight.

Its amalgamation of actives and innovative Syn-Tec formulations means it is the first co-formulated potassium phosphate potato product to combine protectant activity with systematic and multisite activity.

Mr Goddard explains that the product’s mixture of 75g/litre amectoctradin and 453g/litre potassium phosphonate shows promising results when applied at the advised application rate of 3.2 litres/ha. Trials show one-quarter of the blight in potato crops when compared with a rival product at the recommended 0.5 litres/ha.

“For optimum performance and protection, BAS 657 is best applied from early rapid canopy to canopy complete,” he says.

The pre-emergence herbicide BAS 656, containing the active dimethenamid-p offers a new mode of action mixer for weed control in potatoes at an application rate of 1.2 litres/ha

“With the losses of linuron, diquat and likely restrictions on doses of numerous other herbicide actives, weed control in potatoes has changed and will continue to change dramatically – with future control likely to be more complicated with more complex tank mixes,” says Mr Goddard.

This new herbicide, which is already available to growers, offers greater weed control. Its dual uptake mechanism enables the actives to be taken up by the plants’ roots and shoots, delivering better weed control, especially in dry weather.

As weeds grow, sometimes the active cannot reach roots where it needs to work, limiting its efficacy. However, the dual uptake system stops weeds from growing when in direct contact with emerged shoots at time of spraying, which allows more opportunity for herbicide uptake by roots after rain.

BAS 480 BCI is a new product for the reduction in wireworm damage in potatoes, expected to be available on the market in 2022, with no harvest interval.

The ready-mix formulation contains a biological active and attractant bait, consisting of the Beauveria bassiana fungus which grows naturally in soils, supplied via granule application at 10kg/ha.

Wireworms are attracted to the granule containing the Beauveria bassiana fungus, where a combination of anti-feeding, repellancy and pathogenic effects occur, which delivers nearly a 50% reduction in wireworm damage.

Mr Goddard says this product development is a huge step forward for potato growers. Its zero harvest interval can be used on all potato crops – an activity that’s close to that of the now withdrawn Mocap (ethoprophos).

Trial work is currently underway to confirm whether applications through current granule applicators will be effective, with the potential for applications in-furrow or broadcasting during planting.