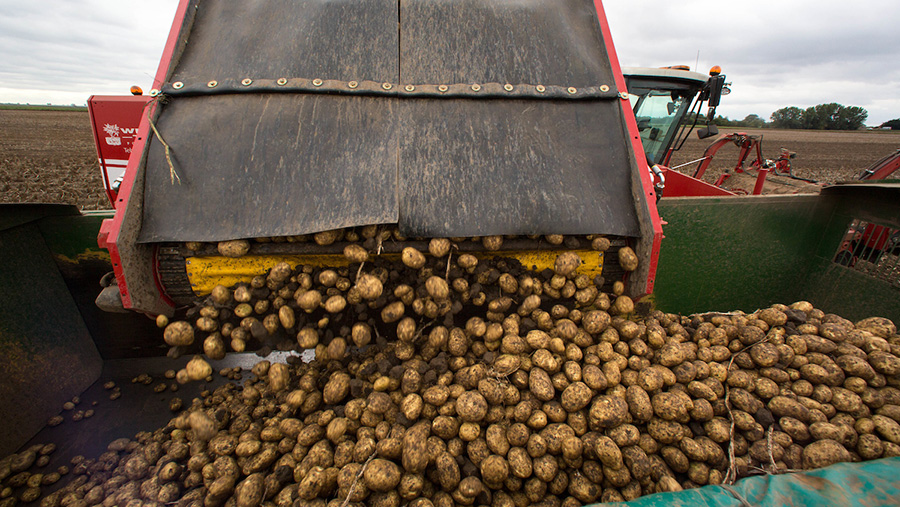 Britain’s potato crop for 2016 has been estimated at 5.22m tonnes, which makes it the fourth-smallest since record began in 1960.

AHDB Potatoes’ first provisional estimate of total production places it 5% down on last year’s crop, highlighting the effect of the season, which also affected cereal and oilseed yields.

Lower yield as well as wastage are being blamed, with the estimated yield of just under 45t/ha some 8% lower than 2015. This is volume and does not include outgrades.

This drop in total production is despite the estimated planted area being 4% higher than in 2015, at just over 116,000ha.

Speaking on Thursday (1 December), AHDB market analyst Arthur Marshall highlighted there have been many anecdotal reports of wastage, particularly due to growth cracks and greening.

“This, combined with a lower gross yield, has resulted in the smaller crop.”

However, he added that the picture differed by market sector and was partially related to yield performance by region.

“For instance, Scottish yields are down less year-on-year compared with English yields and those sectors that Scotland specialises in [packing and seed] have seen production levels supported somewhat.”

This season’s overall drop in production follows on from last year’s already low level, when tightness in supplies became evident later on in the season.

“Supplies this season could be even tighter in many market sectors,” he concluded.