Lincolnshire potato contractor David Matthews expects potato haulms to have a high biomass at burndown time, thanks to this year’s growing season, and says growers will need a lot of horsepower to flail successfully in one attempt.

G&D Matthews, which grows about 161ha of potatoes for the pre-pack market at West Pinchbeck, near Spalding, as well as offering a full contracting service, has invested in a John Deere 6250R (250hp) to provide enough power while also being lightweight.

“Historically, we would have used 150hp, but when the tops are green and large, you need a lot of horsepower to do it well,” says Mr Matthews.

Mr Matthews first experimented with flailing two seasons ago using a four-row Grimme topper with a ridge-press in preparation for life after diquat, which growers must have finished using by 4 February 2020.

While other desiccation products exist, without diquat, most growers will opt for an initial flailing pass to remove the majority of potato haulms before applying contact herbicides to finish the job and achieve skin-set.

With the topping method showing promise, Mr Matthews stepped up to a two-part machine last year with a Scotts Trinity 6000 rear unit and a Baselier two-row unit on the front, in order to compare different manufacturers.

With the Scotts machine performing better over the 607ha the contractor flailed last season, a second Scotts unit – a two-row front topper – was bought in preparation for increasing the flailing acreage to more than 800ha this season.

The Scotts topper also comes with a mulching bar, which means there is less haulm to deal with at harvest time.

Excess haulm, especially this season, can be a problem for growers and restrict the success of the following applications of either Spotlight (carfentrazone) or Gozai (pyraflufen), if it has not wilted away sufficiently.

The mulching bar is especially useful to Mr Matthews, as he leaves just 10-15cm of haulm – half the average 30cm.

“One thing we were a bit concerned about was doing too good a job,” he says.

“There is lots of debate about how much haulm to leave, but as long as there is a target for spraying, we haven’t found any negatives.

“Leaving 12in means there is still a lot to go through the harvester, and means you have to top again.” 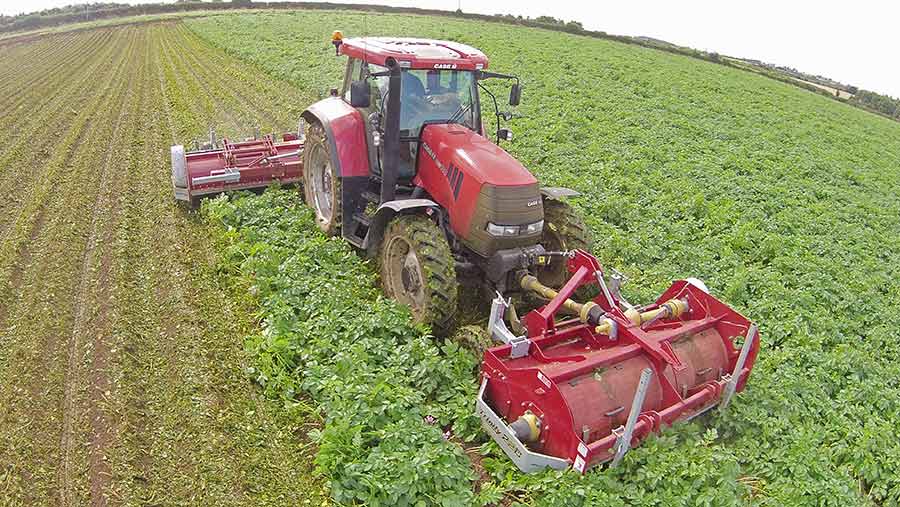 Scotts has designed the front-mounted two-row topper with a bigger gearbox, as it’s the first thing through the crop and it needs to be powerful and robust.

However, one criticism of topping before spraying is increased wheelings, so Mr Matthews says the right tyre equipment is critical.

He has fitted Alliance 380 VF flexible tyres, as in a damp year they lessen the wheelings significantly, but compaction could still be an issue if conditions were to turn very wet.

In such conditions Mr Matthews could opt to remove the ridge press, which is useful for pushing the ridges back together which may have cracked during dry weather, leaving potatoes vulnerable to greening.

The Maris Piper being topped, ridge rollers doing a fantastic job with all the cracking in the ridge. pic.twitter.com/rHTdjT6Z0v

He expects flailing to start from early to mid-August this season, with crops around Lincolnshire looking very good due to an earlier planting and dry May.

However, the 177mm of rain the county received in June has taken the shine of the Lincolnshire crop, taking it from better-than-average expected yields to just average.