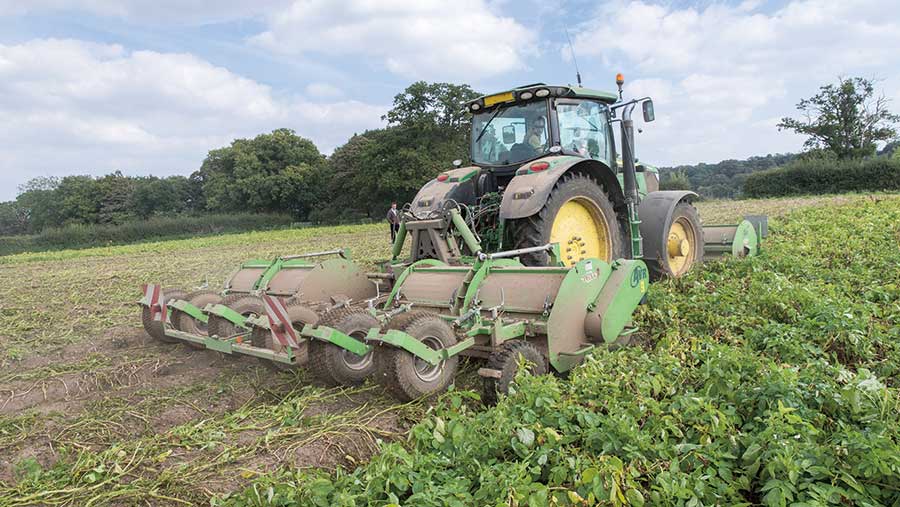 This is the last season that potato growers can use the broad-spectrum herbicide diquat to desiccate their potato crops, therefore, growers are being urged to look at alternatives this summer.

Sales of the widely used desiccant will cease next month (31 July), with a use-up period ending on 4 February next year.

It was more than three years ago that Farmers Weekly reported the European Commission’s proposed ban.

However, despite the uncertainty over its future, many growers are frustrated that very little independent research has taken place on the potential problems and best options for replacing diquat in a range of situations.

That is set to change this summer, however, as AHDB Potatoes will be carrying out replicated trials of several desiccant treatments – existing and novel, mechanical and chemical – side-by-side across its British Spot Farm network and other sites.

These trials will provide growers with reassurance on the right way forward for desiccating crops in their own situation, but there are also some strategic considerations ahead of next season for those presently relying on the active to burn down crops.

Potato haulm destruction at a glance

Over-application of nitrogen results in crop canopies that are too large, and this will slow down and reduce the quality of topping operations.

In addition, where growers are relying on alternative desiccants such as Spotlight or Gozai, which are slower acting and more effective on stems than foliage, oversize canopies will reduce speed of kill further.

Research suggests that on average, growers are over-applying nitrogen by about 30kg/ha and senior Niab Cuf researcher Mark Stalham says this will have to be addressed after diquat is lost.

In a wet year when travelling with a topper might not be possible, growers won’t have the fast-acting herbicide to get them out of jail and will be relying on weaker desiccants, so reducing the size of canopies will be essential.

“With a weaker armoury to kill crops, we need to be getting crops in a state where the chemicals will work better.

“That can be done by less N than we are currently using and less than growers will want to apply, as they often want crops looking greener than necessary until they kill them, it needs to be remembered that crops are being managed for productivity and profitability.”

At present, some are not taking account of specific nitrogen requirements of varieties based on determinacy, which is a measure of the crop’s capacity to maintain leaf production after the first appearance of flowers.

With most nutrient advice coming from fertiliser suppliers, when nutrient programmes are planned overwinter, unless growers know which varieties are being grown and where, recommendations are often levelled out for the determinacy group that requires the most.

Dr Nelson says this results in excessive nitrogen being applied to some crops and is an area where growers need to take more control to reduce oversize canopy and promote at least partial senescence at the usual time of haulm destruction.

He adds that opting for the lower end of RB209 recommendations will allow growers more flexibility to adapt once the growing season starts.

“Everything is getting a minimum application at planting and you can then top dress a proportion of the N based on variety and how much is actually required,” he explains.

Growers with large areas of potatoes on heavier land, silts and black soils are most exposed to delays in haulm destruction without diquat, as travelling with a topper in a wet season will be difficult without causing damage to soils or crop.

Such delays could result in a significant proportion of crop being outside the size grade or in the ground longer and exposed to pest and disease, reducing marketable yield.

“Those growers will need to look hard at what they are doing over the next 18 months. Without addressing this issue, some of the larger growers may struggle to get all crop lifted in good time,” he explains.

Dr Nelson says in these situations, growers will need to aim for an earlier harvest and in addition to reducing nitrogen inputs, variety selection should be reviewed to bring harvest date forward.

This means reducing the area of long-season varieties and aiming to grow more determinate types which senesce earlier and spread out the haulm destruction and harvest when flailing is the only option.

Dr Stalham also notes that with Reglone or Reglone sequences, growers will be used to a rapid kill, leading to a period of around three weeks between the T1 application and harvest.

Late season maincrop growers, who are generally less concerned about size distribution than salad or seed producers, will tend to plan a harvest date and work back three to four weeks to determine the T1 timing.

With alternative chemical methods potentially taking between one to two weeks longer than diquat to get crops “harvest ready”, caution should be exercised if selecting late harvest dates where conditions might deteriorate, such as on heavy soils or in high rainfall areas.

In addition, where flailing large areas, progress may be slow or delayed where relying on a contractor.

“If crops take longer to kill and conditions look like they will catch you out, some will try and harvest before skin set.

“This leaves the crop susceptible to damage caused by removing skin or cutting, increasing the change of bacterial rots or ingress of blight in tubers going into store. Planning and timeliness will be key to reduce that risk,” explains Dr Stalham.

Yorkshire-based SPUD Agronomy potato specialist Rob Blades has many clients relying on a topper for a rapid defoliation of salad and seed crops, with most using follow-ups of Spotlight to kill stems.

He is relaxed about others moving to a flail-based system to manage haulm, with the only major concern being what to do when a crop has significant late blight or blackleg infection ahead of topping.

“In these cases, we may not have any choice other than to use Spotlight or Gozai as that first spray, with a split dose ensuring as much foliage is dead before topping to reduce disease spread,” he explains.

Those currently not using toppers are advised to check out the options for purchasing ahead of next season. It is wise to try out a flail and spray sequence using a contractor or neighbour on a small area to familiarise with the process and its potential pitfalls.

Mr Blades says planning field layout ahead of 2020 is another important consideration where using high-capacity three-bed toppers, with many growers used to planting headlands all the way up to the main body.

“You need to ensure there is enough space for the machine to turn on headland without running on too much of the headland and damaging the crop,” he explains.

Topper capacity will influence a farm’s ability to carry out the haulm destruction operation at the right time and will be key to successful implementation, adds Mr Nelson.

“You are going to need high capacity machinery, particularly where growing large acreages.

“Many rely on contractors at the moment, which is fine, but if you get behind because of the weather it takes a few days to catch up again, much like the days when we were using sulphuric acid.”

On a positive note, he says the move away from acid improved production practices after its withdrawal and Mr Nelson is optimistic that the diquat ban might achieve the same.

“If crops are grown correctly [for topping], with the right varieties and nutrition, we could be lifting potatoes earlier than traditionally we have done.

“That is better for quality and reduces cost, risk and damage to soils. There is nothing riskier than harvesting potatoes in the second half of October,” he adds.

Two sets of Independent replicated trials of various potato haulm destruction methods will be funded by AHDB in 2019.

Niab Cuf is providing scientific co-ordination of the desiccation trial, conducted in a number of locations around Britain.

This will give them an early impression of results and the chance to discuss and debate the merit of the various treatments with the scientists leading the trials, machinery manufacturers, agrochemical companies and agronomists.

“Also, if you see the crops during that time, when the end results are presented later in the year, they will be much more meaningful,” adds Dr Stone.

The treatments include two controls – one a typical Reglone-based programme at T1 and T2 and the second no desiccant at all.

A fungicide will be added to all treatments, but the product has yet to be finalised, due to some tuber blight-active products containing wetters that could potentially influence the performance of desiccants.

Most growers have moved away from one-pass flail and spray systems, as it slows down the topping operation, and crop residue on top of the ridge can impede coverage of stems, reducing the efficacy of the desiccant.

However, for logistical reasons treatments will all be conducted in one visit and mechanical flailing will be followed immediately by Spotlight application.

The trial will also look at other approved desiccant Gozai, and both Spotlight and Gozai in sequence or in mixtures.

Added to the chemical line-up is pelargonic acid, which is only available as a herbicide for amateur use in the UK, but agrochemical company Certis has an approval for desiccation in other parts of Europe, such as France.

Omex’s sodium chloride solution Saltex Plus will also be applied as part of a sequence, plus foliar ammonium nitrate, which is known to scorch foliage and may provide an alternative.

A separate set of haulm destruction trials are also being run by AHDB in 2019, concentrating on mechanical approaches.

Potato kit specialist Grimme has been involved, with its prototype root cutter as one treatment.

The trial design will identify relative efficacy of chemical and mechanical haulm destruction methods and treatments include flailing, root cutting and chemical treatments in various combinations.

Tubers from all the treated plots will also be assessed for integrity in store, with weight loss, soft rots and skin blemishes being key measures.

Timing of treatments across the trial locations will vary depending on conditions and crop development, so potential opportunities to visit the trials will be confirmed later in the summer on the AHDB website and in email communications.