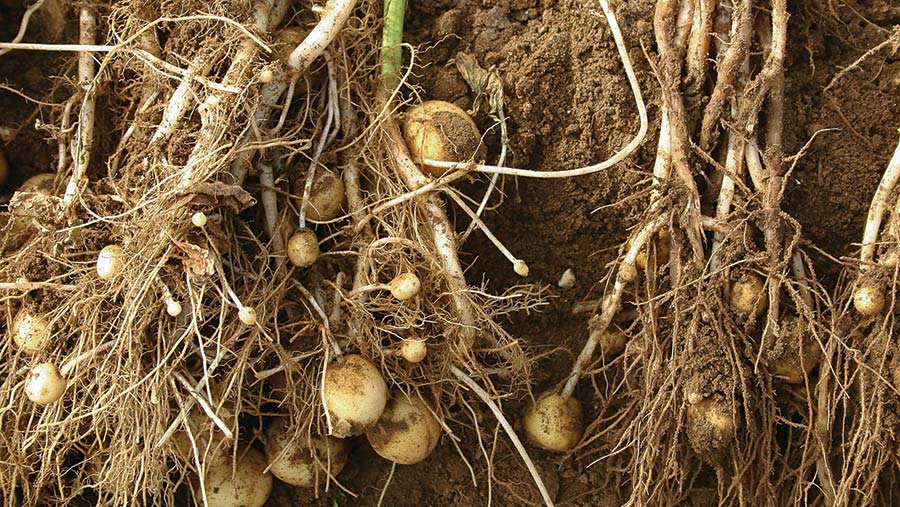 A new liquid nematocide product is giving a Norfolk potato company the option to tackle potato cyst nematode (PCN) levels in its salad potato crops for the first time.

According to AHDB figures, PCN can cause yield losses of up to 35% and populations can remain in soils for years.

See also: Video: How to get the best PCN control from biofumigant crops

However, levels are currently low at Holkham as most of the area rented by the company from tenant farmers on the estate is only in its first or second season of potatoes, meaning PCN levels have yet to build up.

Holkham Emerald only began growing potatoes when reservoirs started to be installed 15 years ago, providing irrigation to the light grade two to three soils on the estate that previously had none.

Testing has revealed that about 80% of the company’s growing area has zero eggs per gram of soil, while zero to five eggs were recorded on the remaining 20%.

Although PCN levels are well below the level seen on a lot of farms, Holkham Emerald’s crop production manager, Harry Barnett, says the key is to be risk averse and to do everything possible to protect quality and yield.

There are also pockets of land that have populations of free-living nematodes due to carrot production in the past, meaning sprang is a worry.

The six-year rotation is about to be extended to eight years to help keep PCN levels low, but until now Mr Barnett has had few options for controlling PCN available to him as 75% of the crop is grown for the salad sector.

This means that there are no PCN-resistant varieties available, and the necessary harvest interval for granular nematicides means these cannot be used either.

The product will be added into the water tank to be mixed in-line with Amistar (azoxystrobin) and applied in-furrow, at a rate of 0.625 litres/ha.

“It’s the ambition of the landlord to reduce nematicide use across the estate, and Velum is seen as the more ethical option because it doesn’t kill all organisms in the soil,” says Mr Barnett.

Soil health is key at Holkham, with min-till practised, using a deep cultivator before potatoes rather than the plough.

Cover crops of oil radish and vetch are also established in the autumn ahead of the crop to provide deep rooting to condition the soil, and also to fix nitrogen, with store lambs bought in to graze them right down before cultivating.

The product will be trialled across 70ha of both salad and maincrop varieties this season, targeting those areas with the highest PCN counts.

At half the price of conventional nematicides, which are about £180-200/ha, due to the low dosage required, Velum should be a cost-effective option.

“We will be using Velum as a standalone product. Realistically, all our counts are below two eggs per gram of soil, but due to the inaccuracy of the test, we are doing it as a precaution,” says Mr Barnett.

“It’s our first year using it at field scale. We don’t know how well it will work, but the aim is to keep it at low, manageable levels.

“We are dipping our toes in the water, but it seems like the future.”