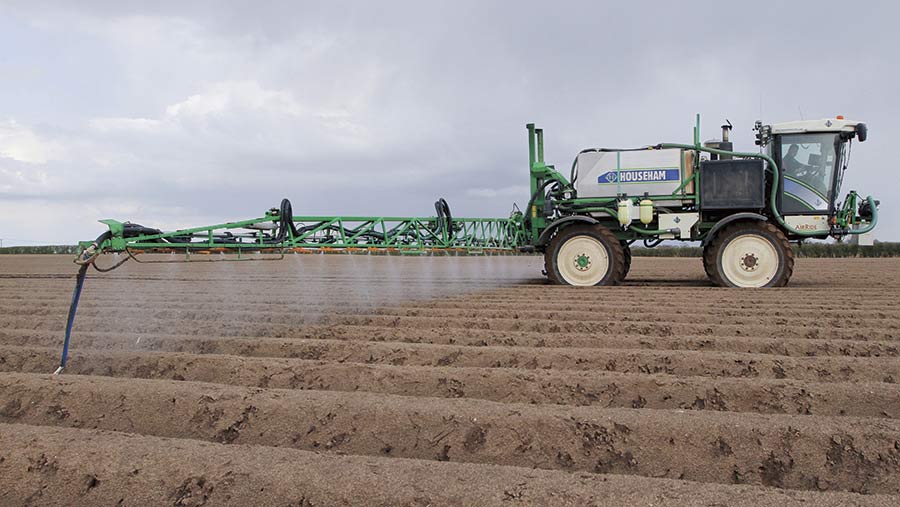 With just one season of use remaining for the widely used pre-emergence herbicide linuron, potato growers are being urged to trial new strategies to find what works best on their land.

The cut-price spray has been the cornerstone of tank mixes for over two decades, but will disappear from shelves on 3 June.

Applications are banned one year later on the UK mainland, although those on Jersey only get six months.

Control of weeds between planting and full canopy emergence some six weeks later is regarded as crucial to maintaining yield. Then the crop can compete through shading.

But while agronomists say since the cost of spraying is likely to rise without linuron, good control is still achievable.

See also: Video: How to get the best PCN control from biofumigant crops

“We need to move on,” says Andy Steven, company agronomist for advisory group Agrovista, explaining that the writing has been on the wall for linuron since the application rate was cut six years ago.

The natural successor to linuron is metobromuron, marketed as both Praxim and Soleto, with similar levels of weed control, no buffer zones, and good control even on light land.

Growers shouldn’t skimp on application rates he warns, as metobromuron already has some moderate resistance issues, particularly against black bindweed and cleavers, but will provide good cover as part of a mix with other products.

While there are many different options to choose from, and growers will need to keep in mind the particular weed burden and soil conditions on their own land, he says.

He has found a combination of 0.5kg/ha metribuzin and 2-3 litres/ha of metobromuron effective against a wide cross-section of weeds.

Stuart Maltby, agronomist with rival agronomy company Frontier, agrees that growers should resist the urge to recoup the costs of losing the cheaper linuron by cutting back the rates of metobromuron too far.

He recommends growers avoid rates lower than 2.5-3 litres of metobromuron in mixes for effective weed control.

Instead, he believes growers will recoup the costs of a robust pre-emergence programme by having a cleaner crop during the critical establishment phase.

Metobromuron is a very safe product, he says, and will not cause growers to run the risk of crop yellowing unlike linuron.

However, if mixing with metribuzin, it pays to remember that brassicas are unable to be grown the following season, although there are no problems with the first wheats, which remain the most typical following crop, says Mr Maltby.

However, growers should be mindful of the weather forecast when using pendimethalin, he says, as applications followed by rain can cause crop stress.

Mr Maltby says that prosulfocarb is a good choice to partner metobromuron, as each are stronger where the other is weaker, with prosulfocarb particularly strong against grassweeds.

Mr Steven agrees, but highlights that dry conditions will shorten the time that it’s effective in the soil.

In addition to residual chemistry, contact products can be used in tank mixes to add firepower and widen weed control.

Mr Steven says that Gozai (pyraflufen-ethyl) is a useful product to include at later stages to hit broad-leaved weeds, and could be part of a three-way tank mix including metribuzin + metobromuron + pyrafluen-ethyl.

Timing sprays for optimum weed control can be tricky, with adverse weather delaying applications while ridge cracking is the last possible time to apply without impacting crops, says Stuart Maltby.

Applying a herbicide after the plant has come through will have a similar effect to a frost, setting growth back, he explains.

This means growers often need to take every opportunity to get on the land when conditions allow.

Even a very light crosswind can have also have a significant impact when spraying potatoes, he reminds growers.

It will cause a shading effect, meaning spray will not come into contact with ground on the shaded side of the ridge.