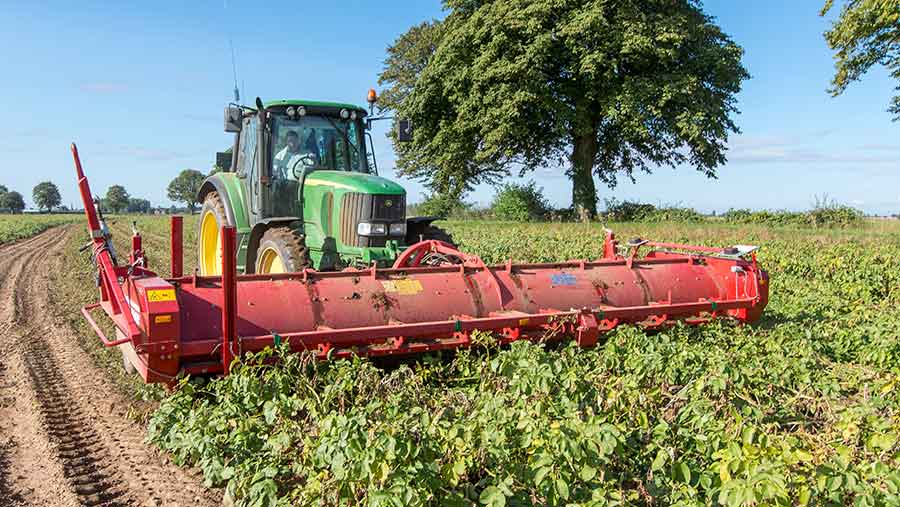 Potato growers are being urged to explore alternative methods of potato haulm destruction this autumn, in case desiccant diquat does not pass through the EU re-registration process next year.

The desiccation of the potato canopy is a critical part of the crop’s management, enabling growers to stop bulking when tubers reach the desired marketable size and promote skin set.

It also helps reduce the risk of diseases such as late blight, blackleg and virus getting into the potatoes sat in the ridge, reducing storage problems or, in the case of seed, carry over to future crops.

Sulphuric acid once provided the quickest and most reliable method of killing haulm, but after its loss in 2009, diquat – contained in products such as Reglone – took over that mantle.

Its EU approval was due to expire in June 2017, but the active was granted a stay of execution to June 2018 to allow the review process to be completed.

Its chances of re-approval remain unclear after the European Commission proposed its withdrawal last March.

If the active is lost it will pose a major challenge for growers, making the desiccation timing decision trickier, the process slower and results less predictable.

Many agronomists favour the use of fast-acting contact herbicide diquat for the initial defoliation or “opening up” of a crop.

Applications of diquat, Spotlight (carfentrazone) or Gozai (pyraflufen) can then be used to finish the crop off, or a flail and spray with Spotlight and Gozai, both of which have good activity on exposed stems.

Glufosinate ammonium, contained in Harvest, is still available for flail and spray, but is a less popular option.

Pearce Seeds agronomist Richard Parry-Jones says without diquat, opening up will be tricky and growers will inevitably have to look at flailing, followed by applications of Spotlight or Gozai to burn off the remaining haulm.

“Now diquat is under the microscope, we’ll be looking at some different approaches this season to see how we get on. Now is a good time to look at alternatives,” he adds.

One of the issues he foresees is a slower speed of kill, with flail and spray working much better in hot and sunny conditions.

However, in a season such as 2017, temperatures have often struggled to top 20C and overhead conditions have been dull, so desiccation can be prolonged using these diquat alternatives alone.

“Growers will have to pay a bit more attention to start dates and get in earlier, so you’ll have a longer period between starting your programme and planned harvest date,” says Mr Parry-Jones.

With the high value of seed, letting tubers sneak over 55mm can be very costly and a slow kill and more reliance on flailing increases the risk of disease infecting the crop and seed being downgraded.

In addition, canopies are often thicker as growers encourage higher stem numbers to produce a high number of small tubers, making a flail approach for opening up a tough task.

“We might get less commercial tonnage and find it harder to meet the demands of the plant health inspectors, so it is worth considering what you can do without diquat in the system,” notes Mr Yardley.

He says seed growers will need to be more vigilant with crop inspections in its absence, performing yield digs more regularly in the run up to desiccation to ensure crops don’t run on too long.

“Looking at nitrogen rates will also be important to try to keep haulm to a minimum. We are already using as little as 60kg/ha on some varieties, which is about a third of ware requirements, but we’ll have to revisit rates again if we lose diquat.”

While flail and spray might be the go-to option if diquat does disappear, agrochemical manufacturer Belchim are exploring the alternative contact herbicide options, including Spotlight and its own product, Gozai, in sequences.

The company’s development and marketing manager Simon Leak says order of application, rates and application methods are being investigated in trials this season to shed some light on optimal use.

“Neither [Spotlight or Gozai] are as good as diquat for opening the canopy, but sequences might provide an alternative.

“If diquat does go, 2018 could be its last year and these trials will give us some experience using alternatives and enable us to offer some advice to growers,” adds Mr Leak.