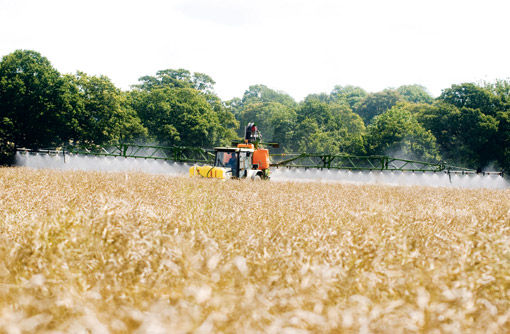 Pod sealants and desiccants should be applied separately to oilseed rape crops this coming harvest, as there is a greater risk of seed loss when going through with a sprayer when burning crops off, warns one expert.

“Oilseed rape this season is all over the place and never in my 30 plus years as an agronomist have I seen a season like it, with such crop variation. In many fields, growers have effectively two or more crops,” says Hutchinsons’ technical development director David Ellerton.

This will test many growers’ desiccation strategies, which aim to get crops as even as possible in terms of maturity for harvest. Trying to even up crops minimises the amount of immature red and green seed in the sample. There are several options, including relying on natural senescence, swathing and applying a chemical desiccant.

Dr Ellerton doesn’t see any growers leaving crops to senesce naturally, as this approach won’t work this season. “It can work in other seasons, but this year there could be as much as two to three weeks’ difference in maturity in the same field.”

Similarly, swathing will be unsuitable as many crops are very short, with insufficient stubble length for crops to lie on for drying. This leaves chemistry which will also have a role in burning off the many weeds in these open crops.

There are two key actives: diquat and glyphosate. Diquat produces a short, sharp shock and is an effective desiccant, but its harshness can lead to brittle pods on occasions, resulting in pod shatter. Glyphosate offers a slower approach and “you also get couch control built in,” he says.

Getting application timings right will prove extremely difficult this season, because of the variability. Where glyphosate is chosen, growers traditionally assess crops by selecting a representative part of the field and collect 20 middle pods from the main raceme.

“Each pod should be opened and if a colour change from green to brown is seen in at least two-thirds of the seeds per pod in at least 15 of the pods picked, then crops should be sprayed within four days, or a week in cool conditions.”

This means the timing may be slightly later and there is a risk that the glyphosate application may be too late for pods on the main raceme, so he recommends using a pod sealant to minimise seed loss from these more forward pods.

“In recent years many growers have usually added the sealant to the desiccant tank mix. But with the greater crop variability there is a risk that some areas will be mature and you could end up knocking seed out when spraying, particularly in the tramlines,” he says.

Therefore, he recommends applying the sealant before the desiccant when the majority of the pods are at full size and light green. At this stage the pods are very flexible and will not be damaged. Zip Pod, which was launched last year, works by creating a mesh around the pod and along the seam to prevent pods from splitting. This product is more flexible than alternative pod sealants and can be applied before pods reach their full size as it expands as the pods grow. Less flexible sealants need to be applied when pods are fully grown to avoid restricting their growth.

In extreme cases, growers may have to apply a follow-up diquat application. “If you apply glyphosate to plants that have not started to turn, they can freeze at that stage and diquat may be needed on these immature patches.

Even with the follow-up you can still end up with immature seed even though the plant has been burned off, which may have implications with contracts.

Getting the most out of glyphosate

These thicker stems will prove more challenging to desiccate for ease of combining in what could be a catchy harvest, says Dr Ellerton.

Last year saw the launch of an enhanced glyphosate formulation from Monsanto with different wetters. “Many glyphosate formulations contain relatively harsh wetters to break through the wax surface to allow glyphosate to enter into the plant. However, this may cause plant shock and it is, therefore, not translocated as effectively in the plant. Roundup Flex is kinder and is translocated, giving more consistent and reliable desiccation, he says.

Another benefit is the quicker rainfastness, which could be valuable in a catchy harvest. “It is rainfast in just four hours instead of up to 24 hours for traditional glyphosate. The formulation also produces less drift than other formulations enabling a wider window of application”

When growers spray during the day is also important in getting the active translocated in the plant. “Avoid spraying late in the day when light levels are falling and the plant is slowing down. Ideally apply in the morning. If it’s too hot (25C or higher), stop and wait until it cools down.”

Growers also need to be patient and give glyphosate time to work. “Problems with combines bunging up in the past have often been due to growers rushing in to harvest crops before they are ready. It takes about three weeks and if you need to leave it longer, then do so.”