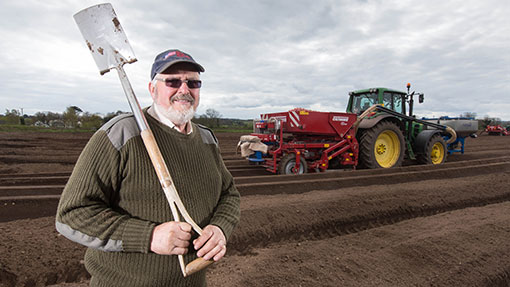 Size matters for ware potato growers and tubers that are too big or too small for your customer means less saleable yield and less profit.

However, Staffordshire spud producer James Daw is aiming to use the latest precision farming methods to iron out those extremes to boost yields and reduce waste.

GPS yield mapping has been a popular feature of new combine orders for some time and Mr Daw has been mapping the output of the combinable crops on his 1,000ha of land for a number of years to target inputs such as seed and fertiliser.

However, across 350ha of potatoes grown for processing giant McCains and crisp producer Walkers there was a gap in his map data every five or six years when it was the potato’s turn in the rotation.

As the potato crop behaves in a very different way to the wheat, oilseed rape, oats and spring beans that he grows, it needed its own output maps to understand any variations across his fields.

When the time came for investing in a new potato harvester in 2011, Mr Daw thought the time was right to ask Grimme if they could provide yield-mapping capabilities on their four-row self-propelled Tectron 415.

“The variation that you have in the potato crop drops saleable yield and in some areas of the field, that can be a 30-40% loss.

“If we are able to map crop output accurately, we can understand and gain knowledge on what is influencing those losses and change our management techniques accordingly, such as varying seed spacing or not growing the crop at all in the worst areas,” explains Mr Daw.

Teaming up with Mr Daw and Grimme has been Jim Wilson, managing director of precision farming experts Soil Essentials, who are based up in Angus, Scotland.

Mr Wilson is a potato grower in his own right and has been yield-mapping his seed potato crops since 1997 after fitting load cells to his harvester, but he believes the technology came 10 years too soon for the British industry.

“There just wasn’t the commercial interest at the time, with only researchers taking up the technology. We are now selling our RootYield system around the world,” he adds. 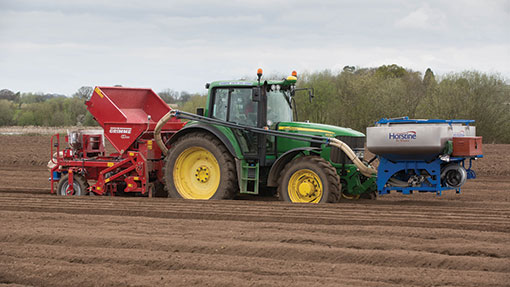 Grimme delivered Mr Daw one of their flagship Tectron 415 harvesters complete with GPS yield mapping, and their service manager Russell Button says the most difficult aspect was finding the best point on the harvester to measure the yield.

“On the self-propelled Tectron the machine feeds the harvested potatoes into a 15t bunker and we decided to put the two load cells on the final conveyor, where they are weighing everything that goes over top of the web,” explains Mr Button.

The angle at which the machine is working is also taken into consideration, as it affects the pressure placed on the load cell each side of the conveyor.

Angle sensors detect any pitch and that is fed back to the CCi control unit in the cab, which makes the necessary adjustment to its weight calculations.

The GPS position, forward speed of the machine and the speed of the conveyor are also fed into the computer, which knows the distance between the machine shear at the front and the load cells to give an accurate position of where the measured material is lifted from.

“We have found that we can get an extremely accurate recording of what is going over the web and where and in difficult conditions allowances can be made for high soil tare.

“The readings have been compared with data collected from the farm’s weighbridge, with every load taken out of each field going over that, so its accuracy is proven,” says Mr Button.

He adds that the system can also be fitted to the company’s trailed machines, with some of their two-row GT 170 harvesters operating in Scotland with yield-mapping capability.

The load cells on those machines are fitted on the mid-section of the cart elevator, but in future Grimme may redesign the trailed machines with yield mapping in mind.

“The elevator is constantly changing its angle, more so than the machine, so we may have to incorporate a flat web somewhere to take out this increased variability,” says Mr Button.

Confident that the yield mapping is accurate, Grimme and Soil Essentials have been working on Mr Daw’s farm since 2012 interpreting the information gained from the harvester.

Mr Button points out that of the many of the combines that are fitted with yield mapping, only a small proportion are using it to its full potential.

“We are working with Soil Essentials and Mr Daw to make sure that we have a system that is easy to use and we have the knowledge to support growers in getting the full potential out of the data it provides,” he adds.

Mr Daw agrees that they have now nailed the yield mapping, with details as small as a narrow footpath across a field easily identifiable on the colourful maps.

The next stage is using the maps to change practices out in the field and the collaborative project has already moved on to variable-spaced planting, variable rate in-furrow fertiliser and irrigation inputs.

“We are starting to understand more about the crop and can influence the variability within the field.

“However, it is still early days and we can’t say we have cracked it, but have made big steps forward,” says Mr Daw.

Using both the yield maps generated from Mr Daw’s harvester and electro conductivity scanning of soil types, he is now varying seed tuber density with the intention of improving the size grade of his crops.

For example, the market may require a size band of 40-80mm and where yield potential is usually higher – such as on heavier soils – tuber size can sometimes be too large or above 80mm.

Increasing seed density in these areas should reduce tuber size as the plants compete for moisture, nutrients and light.

Conversely, reducing planting density on typically lower yielding, light soils that usually produce smaller tubers, should reduce competition and lift a larger proportion of the crop above the 40mm cut-off.

NIAB-CUF potato expert Marc Allison is involved in the project and says it is still at a very early, experimental stage.

He believes that soil type also influences the number of tubers produced by each stem and will be gathering data on that in during the coming season.

“The basic principle of planting at a different seed spacing to counteract these influences and end up with similar sized tubers is there.

“We also have the technology to do it, which is brilliant, but we need to catch up with the agronomy and be able to provide advice on how to optimise it out in the field,” says Dr Allison.

With variable rate planting, predetermined seed-rate maps produced by Soil Essentials are fed into the machine’s CCi control unit and again it adjusts belt speed to achieve the desired seed spacing across the field using GPS.

“We can offer this technology on our planters now, but to sell with confidence we need to understand the science behind to too,” says Mr Button.