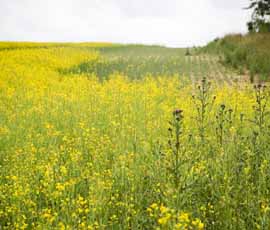 Syngenta will launch a new web-based interface in 2013 that will give growers accurate forecasting of high-risk periods for sclerotinia in oilseed rape.

Currently called RAISO-Sclero, it will be rebranded for its commercial launch in the UK next year.

The risk of sclerotinia outbreaks in the crop have typically been hard to predict, with many factors influencing the effect the disease can have on the crop.

“With all available fungicide products for the disease preventative rather that curative, timing of application is vital to ensure the crop is protected,” says Gary Jobling, development portfolio manager at Syngenta.

“Current prediction systems look at conditions during flowering and presumes the disease is there, which can result in unnecessary spraying.

“When flowering, petal drop and correct conditions at soil level coincide, that is when the risk is at its highest,” explains Mr Jobling.

Syngenta’s RAISO-Sclero incorporates current prediction models, but also uses soil conditions and humidity at ground level, which dictate the release of the ascospores that spread the infection to the crop.

On Syngenta’s website, growers and agronomists will enter data from current crops, such as location, variety, sowing date and local climate. The system then predicts when the flowering period will start.

“At the actual start of flowering, growers or agronomists will then enter the date, which resets the model and combined with a five-day weather forecast, will give an accurate prediction for optimum spray timing,” explains Mr Jobling.

Petal testing kits that detect sclerotinia presence take up to 10 days to provide results, which is usually too late when considering protective treatment, adds Mr Jobling.

In 2008 growers were caught out as conditions at flowering were dry and not conducive to a high sclerotinia year.

“However, good crops and moist soils created a micro-climate inside the canopy which helped the disease to spread into the crop,” he adds.

The RAISO-Sclero system would have been able to predict the risk in 2008 and subsequently crops could have been better protected against infection.

In development since 1997, the system is already being used by growers in France. Data in the UK has been gathered over the last five years, with 2012 the final year before the tool goes online.

“It is based on large data sets, over many years, which gives us confidence in its accuracy,” says Mr Jobling. “We have around 50 growers on board this year from all over the UK.

“The forecasting model will be favourable in Scotland where there is a longer growing period and changeable spraying conditions,” he adds.

The launch of the model will coincide with the release of Syngenta’s new fungicide, which is based on azoxysrobin, with the addition of SDHI active isopyrazam.

“Amistar (azoxystrobin) provides good protection against sclerotinia but also has physiological benefits, giving 0.3t/ha even in the absence of disease. The new product will be even more robust,” says Mr Jobling.

“New technology and chemistry can be introduced but you have to be using it wisely, especially with the sustainable use directive, and the model helps growers do that.

“Down the line it can be combined with spore trapping, which will make sclerotinia prediction and control even more accurate,” says Mr Jobling.