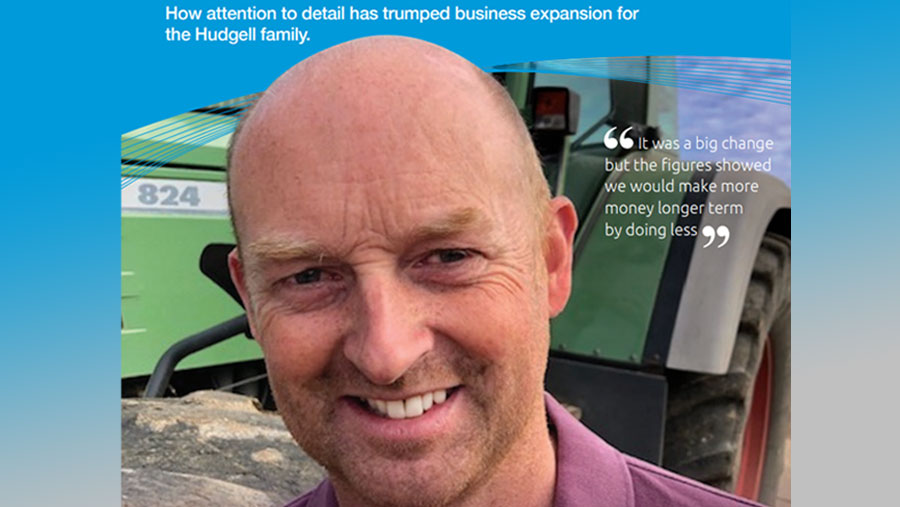 The enterprise he runs with his brother, Duncan, and mother, Fiona, has not followed the no-till or controlled traffic farming paths many of its neighbouring farms have gone down.

The family prefers the plough. They want to farm every hectare themselves. And they will scale back rather than add land if it means better attention to detail, resulting in greater profit.

“We’re just farmers,” Roger said. “I enjoy driving tractors and doing a good job growing the crops we have.

“With farming where it is at the moment we are happy with our scale and the way we do things. If farming does fall upon hard times in the next few years we are in a good position to deal with the challenges.”

He knows this because over the past ten years the family has scrutinised its position.

After a washout year in 2012 the business gave up 300ha of contracting work overnight to farm less land, better.

“A lot of farmers around us thought we were mad,” he said.

“But the ones who I would describe as the ‘know-their-figures farmers’ said they understood entirely what we were doing.”

It was a big decision but through recent involvement in the AHDB’s Farmbench work the decision has proven to be the right one.

The Hudgell family is celebrating 70 years at Southend Farm near St Albans. Roger and Duncan’s grandfather handed it down to their father, Brian Hudgell, who passed away two years ago.

They grow a traditional arable rotation including wheat, barley, beans, oats and peas. Most crops are sold through North Herts Farmers.

A handful of Piemontese cross cattle are grazed on 40ha of water meadows fed with the farm’s barley and supplied to Marks and Spencer through Dawn Meats.

When the brothers joined their father in the business they diversified into contracting in order to expand. At its peak the enterprise was farming 520ha for four farms in the local area, in addition to 420ha of owned/rented land.

When another piece of land came up for sale in 2011 they bought it knowing it would undoubtedly be more profitable than contracting.

They carried out a forensic examination of their costs.

“We went through everything from wearing parts, tyres, machinery investment and the cost of employing someone to work for us,” Roger said. “We wanted to know where we stood. It was our own benchmarking exercise.”

The work showed that after everything was accounted for the business would be making £15/acre profit from contracting. They decided it wasn’t worth the extra work and stress.

This was confirmed during the 2012 harvest when some of their own crops suffered while they tried to keep their contract customers happy in a very difficult year.

Instead of expanding they decided to reduce their contracting business by 300ha.

“By doing fewer acres we could have better attention to detail, farm the land better, and hopefully increase profitability,” Roger said.

“I admit I was sceptical when I first got the call from Strutt & Parker inviting me to be part of its business discussion group which was facilitating an AHDB Farmbench exercise in our area,” Roger said.

“But as I learned more about the project I could see that we could get something useful out of it.

“We started inputting all our information in January. I’m not the most computer literate so it did take some time but there was support there to help me.”

Roger said the reason he wanted to get involved was to learn more about how his establishment system and the way he runs the business compared against others.

“Those of us in the group all know each other and we are all different,” he said.

“There are those who have many staff farming lots of land, and there are small, family enterprises. Some people have the latest tractors and combines and go for controlled traffic farming or direct drilling. Others, like us, have a mix of new and second-hand machines and use the plough.

It wasn’t a case of seeing who was the best or worst, it was about looking at the figures and learning from other people’s experiences and letting them learn from ours.

Roger said he was “pleased” with his figures but would see more benefit from benchmarking if the group could take the exercise further down the line.

He hopes there will be a further meeting where all the members of the group can give more detail behind the costs they have, possibly in a more open forum rather than the figures being anonymised.

“Benchmarking can benefit all businesses, especially those that may have slightly lower profits in their group, as they can take ideas away about how to reduce costs, for example.

“I think we’ll repeat the exercise again this year if everyone is keen. The more you can share the more you will all benefit.

It might be that you spot a way to reduce your fixed costs by using a different brand of tractor, or you see the financial impact of implementing a different establishment system. The more shared experience you get with other people the more it can benefit you own business.”

Roger says the changes the business has made over the past few years, combined with the detailed analysis of where its fixed costs lie, means the enterprise is in good shape as farming enters the unknowns of an EU withdrawal.

Apart from holding back on any significant investments for the time being, he intends to adopt a wait-and-see strategy.

“Because we do all the work and own all of our machinery outright, we aren’t exposed to the same risks an operation with lots of staff and leased kit would be,” Roger said.

“My father’s mantra was ‘if you can’t afford it you shouldn’t have it’ so we have always bought second hand tractors, and a mix of new and used machinery.

“We know our system and the numbers associated with it and will cut our cloth accordingly.”

Want to find out more?

An AHDB Horizon document has been produced outlining the characteristics of top performing farms.

It details what they do differently to others and highlights how apparently similar farms can record drastically different performance. See more

In the past year AHDB has worked with 16 business on Farmbench through a Facilitation Fund.

If you are interested in learning more about how it can help your business go to ahdb.org.uk/Farmbench.