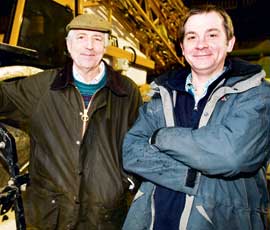 While other growers may dip in and out of barley, Philip Hirst has grown it for as long as he can remember.

“Barley’s always been there. I’m not a fan of second wheat, and a strong believer in spreading cropping workloads. Barley doesn’t always put much in the bank, but it fits into a rotation very well and suits our light land,” he says.

Farming 690ha (1700 acres), based at Uffington in Lincolnshire, land over the hills is mainly limestone brash, with some pockets of stronger boulder clays. Elsewhere light gravel predominates although there are some deeper-bodied soils around the River Welland.

He’s a committed sugar beet grower, oilseed rape is never grown twice in the same field in less than five years, and there are beans in the rotation, too. “It’s about spreading risk – you’re always going to have a pocket of poor weather that hits one crop.”

The barley is there to get a fair return from the moisture-limiting limestone brash and gravels. He has “not too much trouble” getting 7.5t/ha from the 112ha (280 acres) of Cassata winter barley, while the 45ha (110-acre) spring sowing of Tipple should achieve more than 6t/ha.

Fungicide strategy is decided with the help of independent agronomist James Genever, and this year there’s a good winter barley crop that’s worth protecting. “It’s come out of the winter well,” says Mr Genever.

“Others have had to put on a bit of nitrogen to get the crop going. But this crop should get away for an early start.”

The focus is to hang on to as much of this early growth as possible. “You want plenty of tillers and you want to keep those tillers going. Get on top of disease early on and get it stamped out.”

Cassata’s weakness is net blotch. “The most important thing is to get the first spray on in time – about growth stage 30 as the crop starts to get away.”

Recently this has been Fandango (prothioconazole + fluoxastrobin). “It has been a big step forward on barley and it’s nice and easy – all in one can. The prothioconazole gives you good control of rhynchosporium and net blotch, so you get spotless crops from top to bottom.”

He keeps an eye out for mildew, and, if active, adds in a morpholine.

A lower dose of Fandango plus some chlorothalonil for ramularia control is applied around GS49 or awns-emerging stage. “You can find a lot of brown splotches on the flag leaf, so the chlorothalonil helps clears it up.” A growth regulator is also added.

The new SDHIs may be an option at both timings. “HGCA trials suggest that Siltra Xpro (prothioconazole + bixafen) seems to just have the edge on rhynchosporium over Bontima (isopyrazam + cyprodinil). Both give you good net blotch and ramularia control, so no need to add the chlorothalonil.”

If product is available, Mr Genever will be saving the Siltra for the best crops, otherwise go with Bontima as both will do a good job, he believes. “But it’s not been costed yet. We may fall back to Fandango. We also need to get some field experience with the new products and find out their strengths and weaknesses.”

Spring barley can often get mildew, so the first spray timing is around mid to late tillering. Again, it is based on Fandango with a morpholine added, if necessary, although Tipple fairs well on mildew. “Or we may use Siltra Xpro or Bontima at slightly lower rates.”

If crops are suffering in May, the second dose may be reduced or abandoned altogether. Brown rust can be a disease priority at the second timing, although again ramularia is often seen.

While he hopes that some of the winter crop achieves a malting sample, Mr Hirst is more than happy with a decent yield and the advantage barley brings to the arable rotation overall. “You’ll always reap the benefits from good, cultural practice,” he says.