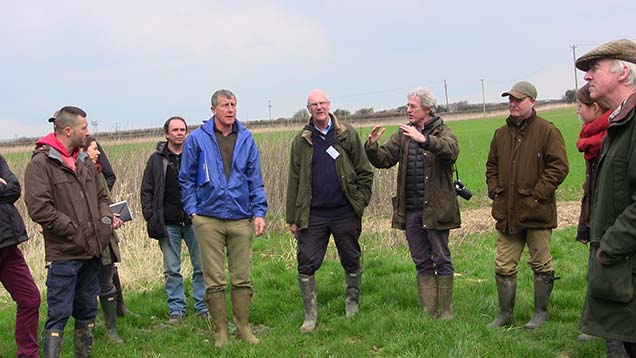 Practical measures that farmers can take to protect pollinators on their land were highlighted during a farm walk in Oxfordshire.

Game and Wildlife Conservation Trust (GWCT) farmland biodiversity adviser Peter Thompson discussed some of the management options that benefit wild pollinators and farmland birds during the walk and talk at Caswell Farms, near Witney, farmed by Richard Matthews.

The Campaign for the Farmed Environment (CFE), the voluntary stewardship industry-led initiative in England, hosted the event on Monday (23 March), which kicked off a series of nationwide pollinator days.

Pollinators are high on the government’s agenda and the event covered a range of tips on hedgerows, arable flower margins and species-rich grassland, field corners within grass fields, management of woodland and sources of nectar and nesting sites for insects.

UK pollinators – what are they?

Defra introduced a national pollinator strategy last November that aims to protect bees and other pollinating insects that support our food production. As part of the new CAP, a £900m Countryside Stewardship scheme with a dedicated wild pollinator package will be rolled out this summer.

The scheme will replace Environmental Stewardship, the English Woodland Grant Scheme and capital grants from the Catchment Sensitive Farming Programme.

Under the scheme, farmers will be offered financial incentives to introduce practical measures to support pollinators on grassland and arable farms.

Mr Thompson said: “The government really wants us to look at pollinators in the new Countrywide Stewardship scheme because of the collapse in pollinator numbers.

“All these insects are part of the food chain. They are important for pollinating fruit crops. It has a knock-on effect on farmland birds and bats and other species. Along with protecting water, pollinators are the next ‘big ask’.”

He added that most people associated the word pollinator with bees, but this did not accurately reflect the wide range of pollinators that visit farms (see table above).

“There really is a lot going on out there, and we need to expand a little bit when we talk about pollinators,” he noted.

“Research shows if we can get about 2ha of sown nectar and pollen mix and about 500m of flowering hedgerow in every 100ha of farmland, potentially across the whole landscape, that would be enough to deliver for pollinators.”

But Mr Thompson said increasing pollinators was not just about flowers, but also about nesting and hibernation. “A lot of dead wood, holes in ditches and other things are all used for hibernation over winter. If you just have flowers, then you’re not actually delivering, you want the other habitats too.”

CFE national co-ordinator Sam Durham said: “Under the new CAP, the voluntary role of CFE is going to be more important than ever because there will be less money in Countryside Stewardship and fewer farms will be able to get into it.

“The alternative to voluntary stewardship is regulation and more impingement on how a farmer runs his business.”

He added: “Under the new CAP greening rules, the CFE has two key messages: add value to your fallow EFA [ecological focus area], such as a pollen nectar or wild bird seed mix.

“Also, think about the value of margins and buffers for farming as a whole – not just for wildlife, but to allow the industry to maintain as wide a range of crop protection products as possible.”

The CFE has teamed up with industry partners to provide a seed offer to farmers who attend pollinator events.

The new wildflower seed mixture, created by Kings as part of the Syngenta-led Operation Pollinator initiative, has been designed to provide pollen and nectar for pollinating insects through the summer, followed by a great supply of seed for birds over the winter.

The one-year Bees’n’Seeds mix is available on a special offer for farmers, in conjunction with the CFE and Kings – 450 1ha packs of mix are available to purchase for £50/ha – along with associated agronomic advice and grower guidelines.