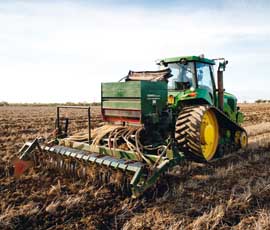 Make no mistake, fewer peas and beans will be grown in 2012 than for several years. Strong prices prompted growers to maximise wheat and oilseed rape drillings last autumn, and every indication is that they will keep drilling wheat into late January.

But there are still good reasons to plant peas and beans this spring, say trade experts, not least because of the very great likelihood of shortages come harvest 2012. “There will be shortage, there’s just not enough peas going to be planted come the spring,” commented Stuart Cree of Ebbage Seeds.

Once again prices will need to respond to get crops grown, added Paddy Barrett of Askew and Barrett in Wisbech, Cambridgeshire. “The export potential for edible pulses is almost limitless, overseas markets just value the quality of English pulses so highly. But with high prices on offer for virtually everything other than pulses it will be a fragile market in 2012. My advice to growers is to look for a contract and work with a reliable merchant.”

Blue peas could be an especially worthwhile option, production having slumped by 40% in 2011 and a further 50% slide anticipated for 2012, but demand as strong as ever. What’s more, micronising is a strengthening alternative market, offering off-spec produce a ready home in pet and horse feed manufacturing, particularly given soya’s firm prices.

Another factor favouring pea drilling in particular is the arrival of varieties better able to retain quality, reducing the risk of a costly £40-50/t price deduction where specification is not met and crop is diverted to feed instead, which is itself under pressure from rapemeal by-product as more crop is crushed for biofuel.

Furthermore, newer varieties stand better, which not only helps preserve quality, but also cuts the risk of combine damage where lodged crops cause unwanted stone and soil to enter the harvester.

Yes, spring high erucic acid rape (HEAR) contracts for £460/t are a challenge, as is strong demand for linseed and spring barley, all piling the pressure onto pulse premiums. But peas offer more consistent yields than spring rape, even in a dry season, as highlighted across most regions in 2011, noted James Wallace of Dalton Seeds.

A three-year study of 36,000 wheat crops in France showed wheat after peas yielded 0.84t/ha ahead of wheat after wheat, and 0.68t/ha more than wheat after oilseed rape. Average nitrogen fertiliser saving was over £85/ha. Opportunities to combat grassweeds, especially difficult blackgrass, are also improved and overhead costs spread.

New marrowfat Strada offers growers the chance to save the cost of downy mildew seed treatment, thanks to a rating of 9 for resistance to the disease. Yield is just 1% behind top marrowfat Neon, while standing power is rated moderate and maturity a little later than other marrowfats.

Also new to the list is white pea Kenzzo, with good downy mildew resistance and good standing ability, and yield only slightly behind Mascara and Gregor.

Amongst large blues Crackerjack stands out as top yielder, 2% ahead of Prophet. Bluestar and Daytona are now fully recommended, as is high yielding maple pea Mantara. Marrowfats Falstaff, Kahuna and Ragtime are now rated outclassed, and Madras was not added to the list.

Spring bean growers can look forward to a new yield benchmark in Boxer, provisionally yielding at 110% of controls, 3% ahead of Pyramid and 5% over top-seller Fuego, but yet to be listed pending National Listing. The pale hilum variety has straw length and maturity like Fuego.

See the Digital edition of Crops for a free, interactive spring cropping margins calculator. Type in your own prices and costs, or use the default figures from John Nix, and see how the different options compare for your business at www.fwi.co.uk/cropsdigital