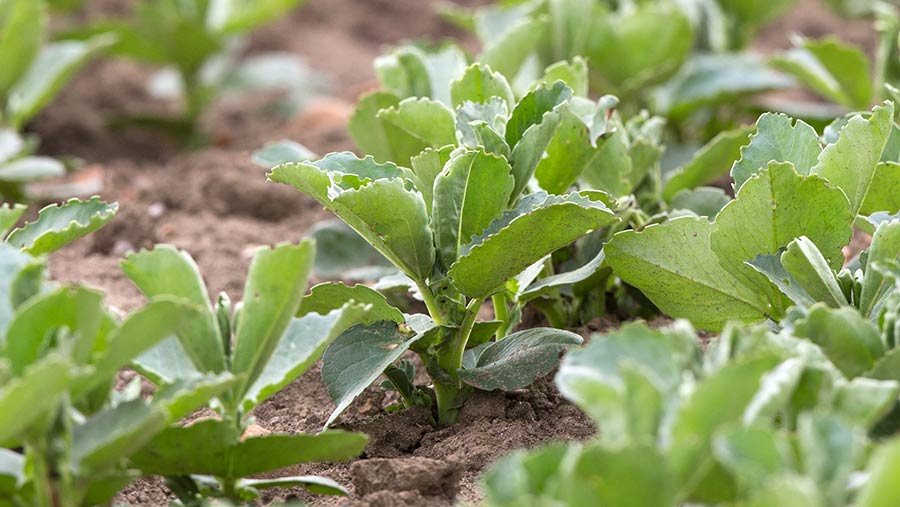 Spring beans can be successfully drilled in the autumn without any major dip in yield, which may help overcome a shortage of winter bean seed this coming season.

The Processors and Growers Research Organisation (PGRO) says autumn-sown spring beans drilled at a higher seed rate and deeper than normal could keep beans in the rotation, and help counter any seed shortages due to the low yields of winter seed crops this season.

Steve Belcher, principal technical officer at the PGRO, says autumn-sown spring beans are best planted at 40 plants/sq m, as they don’t branch as much as winter beans and ground cover is less extensive.

“Obviously there are a number of caveats, such as the harshness of winter, but for some systems this could well work,” says Mr Belcher.

He adds that it is important that plants aren’t too proud through winter, so he recommends targeting drilling between the last week of October through to mid-November, while sowing deep can help minimise lush top growth early on in the season.

Mr Belcher says he trialled planting spring beans in the autumn of 2013 across three different sites. The spring beans survived the winter and yields were very high that year, actually outyielding the winter bean variety Tundra at two of the three sites.

The comparison has continued each year using different spring varieties across soil types ranging from fertile silts to sandy loams. The yields were variable over the years, but overall the results from six years of testing have proved interesting when seed rates were increased, he says.

Over the six years, autumn-sown spring beans of different varieties were sown at the same rate, but also at 40 plants/sq m – the previously (*) recommended density for spring beans. The winter variety Tundra was used  throughout the trials at a rate of 20 plants/sq m.

Mr Belcher adds that variability is an important factor to consider. In some years, the autumn-sown spring beans at 20 plants/sq m yielded a little higher than those at twice the sowing rate.

Mr Belcher was eager to know how these results compared with spring beans when sown at their conventional timing. So between 2016 and 2019, he conducted an additional comparison with a spring bean sown in the spring at the PGRO’s Stubton trial site in Lincolnshire.

“Again winter beans gave the highest average yields – which we expected. But the results were interesting. In this case, autumn-sown spring beans at 40 plants/sq m came in at 95%,” he says.

This was higher-yielding than both spring-sown beans at 40 plants/sq m and autumn-sown spring beans at 20 plants/sq m.

Mr Belcher says winter beans are bred for cold tolerance, branching and a high tolerance to leaf and pod spot, so it’s important to recognise that winter beans have a different profile to spring beans.

“Spring beans may not be as cold tolerant as winter beans. It’s hard to tell what would happen if we did have a harsh winter,” he adds.

The winters during the trial period have been relatively mild, but there have been cold snaps, he says.

Growers will also need to be alert to diseases, especially leaf and pod spot and chocolate spot, as autumn-planted spring beans will flower earlier and are earlier to mature than either winter beans or spring-planted beans.

For growers considering using autumn-sown spring beans, pre-planting advice and support throughout the growing season is available free of charge from the PGRO. It can also conduct testing of farm-saved seed.