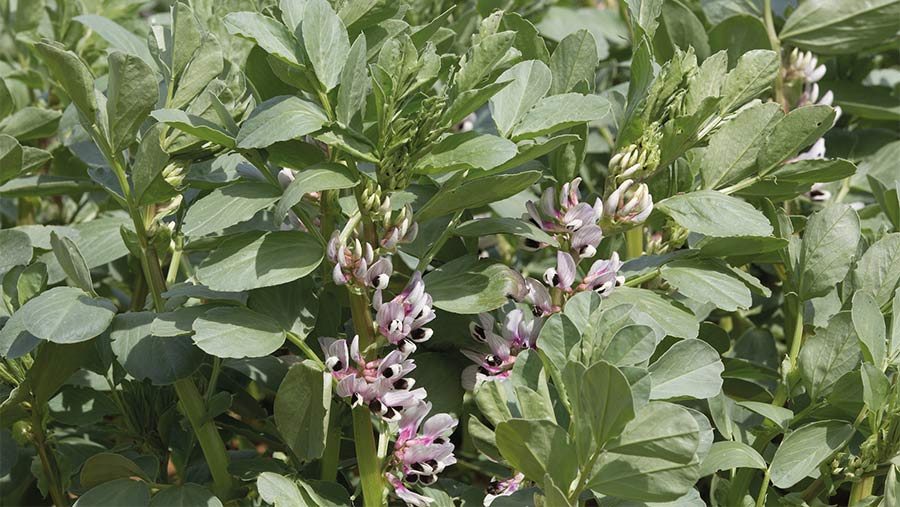 Buy-back contracts for beans are set to be expanded as agronomy group Frontier looks for more than its current 100 growers for harvest 2021, which may interest oilseed rape growers giving up on the crop.

The search for home-grown protein crops to replace soya bean imports is being driven by demand for beans in livestock rations and human consumption, as many look to more sustainable farming practices.

“There is a strong demand for pulses going forward for ruminant rations, human consumption and fish food to offset imported protein,” he tells Farmers Weekly.

Currently, the group has buy-back contracts with 100 bean growers for harvest 2020 that price feed beans at £30/t over November 2020 feed wheat futures, with an extra £30/t for meeting human consumption quality.

For harvest 2021 the group is looking for more growers, probably on largely similar contract terms, while also introducing a contract for beans which are low in vicine and convicine (LVC).

These two glycosides can decrease feeding efficiency in monogastric animals, so spring bean varieties with low levels, such as Tiffany and Victus, can be used in the production of pig and poultry meat and eggs.

The group has a bean processing plant, near Nottingham, to de-hull in excess of 30,000t a year which is running near to capacity to process beans for animal feed and also fish food, where they are used as a binding agent for salmon feed.

The human market is dominated by Egypt, where they are used to make falafel, and this market demands quality beans with little pest damage from bruchid beetles.

Protein level requirements of 26% have been dropped while the group looks at factors which influence bean protein. Mr Bury adds that yields have been good but they have not seen a good increase in protein levels so more work needs to be done.

Britain currently imports the equivalent of more than 3m tonnes of soya each year – 1m tonnes of beans and 2m tonnes of meal, largely from the US and Brazil, mainly for animal feed and all of it largely genetically modified (GM).

The area of oilseed rape has halved from a peak 756,000ha at 2012 harvest due to damage from cabbage stem flea beetles and a succession of dry autumns, and some believe the area may dip below 300,000ha this summer, making beans an interesting alternative.

The group is in its third year of a deal to supply 5,000t of LVC beans, which are more easily digested by pigs and poultry, focused on the spring bean variety Tiffany.

There are now just over 30 bean growers supplying the group, from Kent up through East Anglia to Yorkshire and across to Shropshire.

“What’s driving this is the willingness to use UK produced protein with a much lower carbon footprint than imported soya beans,” he adds.

Growers this season will receive either £42/t over the ex-farm feed wheat price or £5/t over feed bean prices, whichever is the best price. Contracts for the current season are still being negotiated.

Two LVC spring bean varieties joined the Recommended List from the Processors and Growers Research Organisation in 2019, Tiffany and Victus, but only the former is included in the contract.