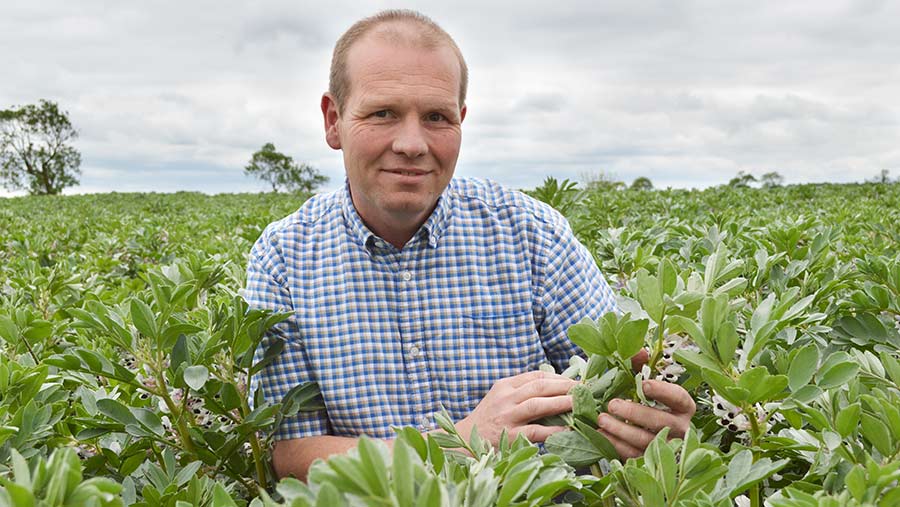 Martin Lines has benefited from growing beans – not only because there is an increasing demand for home-grown protein crops, but also as it has helped him nearly stamp out troublesome blackgrass.

The low-input winter-sown crop, where no fertiliser or insecticide is used, has given him high yields, benefits the wildlife and also helps the nation cut back on expensive imported soya.

His pulse crop area was increased to tackle out-of-control blackgrass on his heavy land Cambridgeshire farm, and now gives him a return of well over £1,000/ha with only seed, one herbicide and one fungicide as input costs.

“The winter bean crop really stands up for us and is very valuable in the rotation. It’s a UK protein crop grown for the domestic market, so it helps cut our carbon footprint,” he tells Farmers Weekly.

See also: Why prospects are looking up for peas and beans in 2019

The wet spring and summer drought in 2018 favoured his bean crop which went on to yield 5.2t/ha, and with feed-quality bean prices racing toward £260/t gave him a good financial return.

His strategy is to budget for a yield of 4t/ha, and for this season with post-harvest feed beans prices at £200/t and taking all variable and operational costs such as drilling, spraying and harvesting, his net margin is budgeted at £530/ha.

This might not beat the profitability of winter wheat, but beans give plenty of benefits like a healthy soil, a good entry for winter wheat, residual beneficial nitrogen, and a non-cereal crop in which to control blackgrass.

This season he has signed up for agronomy and grain trading group Frontier’s package to supply his beans for fish food at a price of £35-40/t above November wheat futures, giving a bean price of just under £200/t with an extra £10 for higher protein. 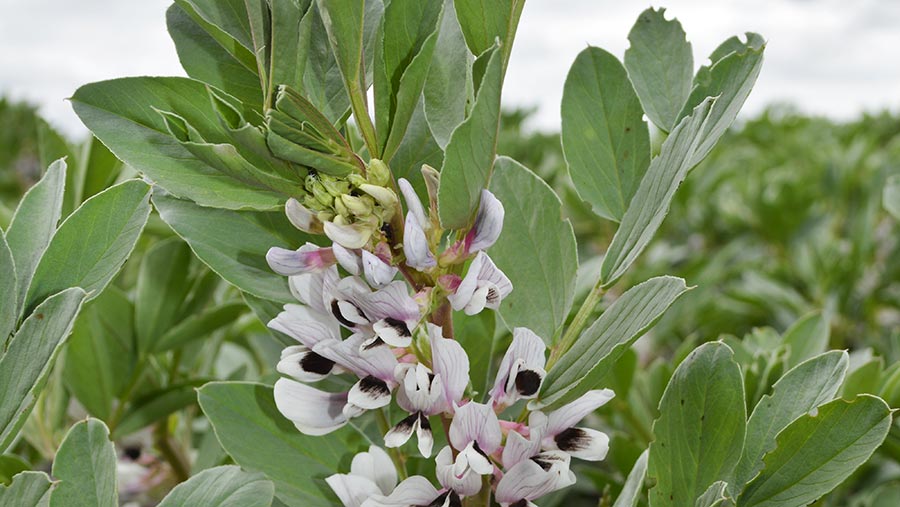 Why beans are ideal for fish food

Andrew Bury, Frontier’s pulse manager, says beans are ideal as a binding agent for salmon food when making pellets out of soya and other ingredients, and the group has signed up 100-plus UK growers this season.

The Scottish and Norwegian salmon food industry looks for 1.3m tonnes of feed a year which amounts to a potential bean market of 130,000-150,000 tonnes while more demand is opening up in the pet food and human nutrition areas.

Agronomy and grain trading group Frontier has built a new £3.5m bean processing plant at one of its existing sites near Nottingham to de-hull the bean to be used in fish food products. The plant is to be officially opened this week.

“Europe is deficient in protein crops so there will always be a market for UK-produced bean crops,” says Mr Bury.

If beans are of good quality and not damaged by bruchid beetle they can fetch a further £30-40/t for the human consumption market, which is dominated by the Egyptian market where they are used to make falafel.

In addition, many experts see the use of soya coming under pressure as virtually all the crop is imported and is genetically modified, while soya from South American is now being grown on cleared jungle.

He farms 540ha of heavy boulder clay and had been growing largely autumn-sown crops, and spending up to £200/ha on blackgrass herbicide control.

“Winter wheat yields were down to 2.5t/ha due to blackgrass and four years ago we were losing money growing wheat,” he says.

So a two-year spring barley break was introduced followed by an expanded winter bean crop. Four years on, and he has almost eliminated blackgrass on the farm, and blackgrass herbicide costs are down to £45/ha.

A small area of winter beans had always been grown on the farm and this has now been expanded to 115ha drilled with home-save seed of the Wizard variety.

In autumn 2017, his spring barley stubbles were left untouched until he drilled his bean crop at 180kg/ha in late October with his new low disturbance Kuhn Aurock 6000RC 6-metre wide direct drill.

About two weeks later the ground is sprayed with a mix of glyphosate and propyzamide (Kerb) with the first contact-acting to control the blackgrass present and the second residual to control late-emerging flushes of the grassweed.

His soil indices are high enough not to apply phosphate and potash fertiliser as he applies manure from a nearby poultry farm during his crop rotation. 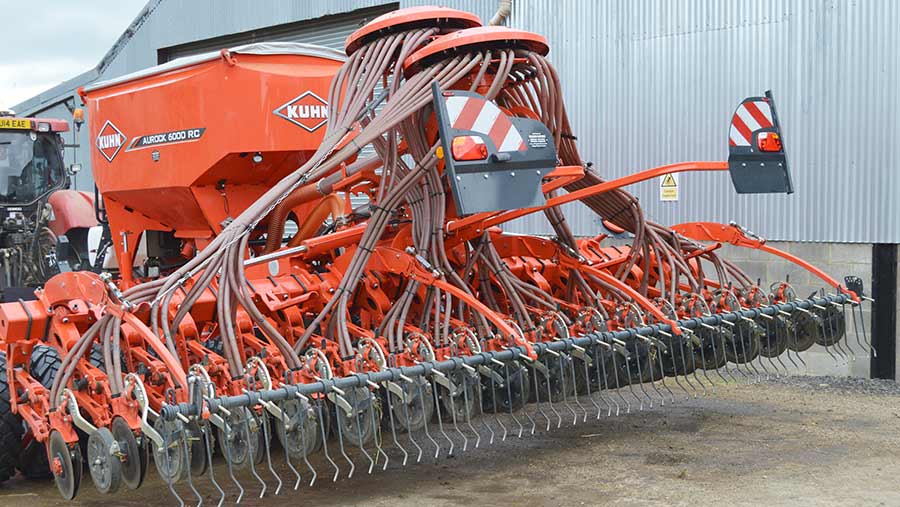 The crop is sprayed with a fungicide, such as cyproconazole + chlorothalonil (Bravo Xtra) in early flowering to protect against chocolate spot, while no insecticides are needed against pests such as bruchid beetle.

He is using pollen and nectar field margins to encourage pollinators while beneficial insects such as ladybirds and hoover flies help control black bean aphids. That year’s crop was harvested in September 2018 and yielded 5.2t/ha.

He has seen higher bean yields near these field margins, so this year he is introducing bee hives to help with even more pollination.

“Overall, winter beans are a cheap crop to grow and have cleared the blackgrass up,” he says.

This season’s crop was drilled in late November/early December, as Mr Lines had to wait for blackgrass to germinate in a very dry autumn. As the drilling was late, he increased the seed rate to 220kg/ha.

In some fields he is dropping the Kerb and spraying just with glyphosate as the blackgrass situation is improving. He is also looking into using companion crops, such as white clover, to suppress weeds and also fix more nitrogen.

The fish food contract stipulates the use of two biostimulants to improve rooting and the protein content of the harvested beans.

Robert Nightingale, the group’s break crop production specialist, says initial early trials have suggested the twin sprays, which include phosphites and minor nutrients, could raise yields by up to 20% and improve protein levels.

The two sprays – applied at the four-true leaf stage and at early flowering along with the fungicide – cost £46/ha, adding to overall growing costs, but they will hopefully result in improved yields and earn a premium for higher protein beans.

Mr Bury says standard feed beans containing about 26% protein – which when de-hulled produce 28% protein – are a good ingredient for use in salmon food.

His group is offering a standard contract for 26% protein beans at a £40/t premium over November wheat futures, with a further £10/t if growers can achieve 29% protein.

Mr Bury is predicting an increase in the bean area next year from the current 145,000ha in the ground with a potential for an area of up to 200,000ha. He expects the premium to ease, but lower values will stimulate more demand.

For Mr Lines, winter beans will stay as a mainstay of his rotation, but his oilseed rape crop will come down for next season as half of his current crop had to be pulled up due to autumn drought, leaving just 60ha in the ground.

His spring barley Planet is yielding 7.5t/ha and generally gets a £40/t premium over feed barley to go as malting on a 1.85% nitrogen contract.

The success of winter beans and spring barley has meant with the oilseed rape area coming down he can replace the rapeseed with winter barley now his blackgrass is under control.