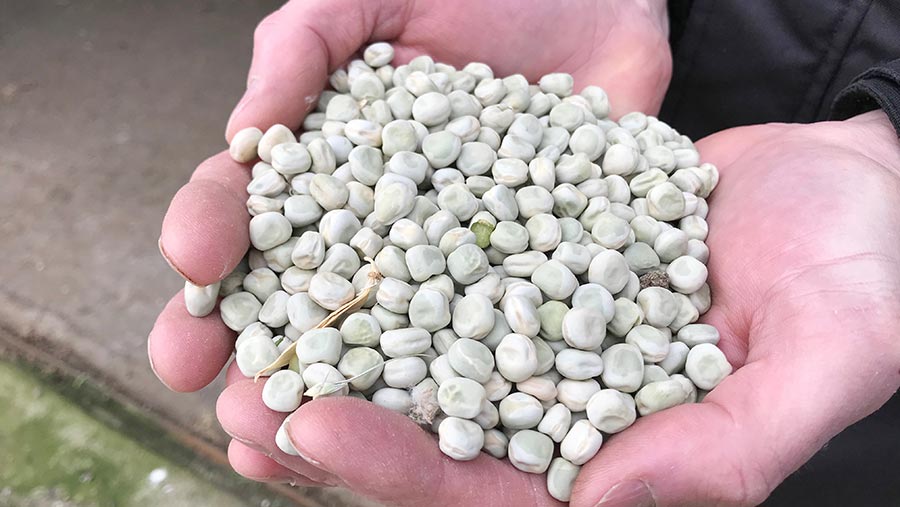 Growing a profitable crop of marrowfat peas requires complete attention to detail, from seed-bed formation to harvest, as getting it wrong can lead to disappointing yields and loss of valuable premiums.

Poor seed-beds, with areas of compaction and wetness, will not be tolerated by the pulse while excessive sunlight and rainfall can also cause bleaching, where peas lose their green colour.

Marrowfat contracts require less than 10% bleaching, so peas must take priority at harvest in order to make the grade, says Russell Harrison, the BEPA pulse competition’s champion quality marrowfat pea grower. This is one example of his dedication to hitting quality specs.

Mr Harrison decided to grow marrowfats on his 670ha farm at Barham, Cambridgeshire when he was looking to introduce some spring cropping to combat blackgrass after it became a problem from a tight rotation of winter wheat and oilseed rape.

Although marrowfats do provide more options to tackle the grassweed, they are grown primarily as a cash crop as the margins for the spring option are twice that for beans or other peas.

He first started growing 32ha for Dengies, and now grows 60ha of the variety Kabuki for Dunns, with the award-winning crop being destined for Japan, where British peas are preferred to other markets due to the traceability of the crop. 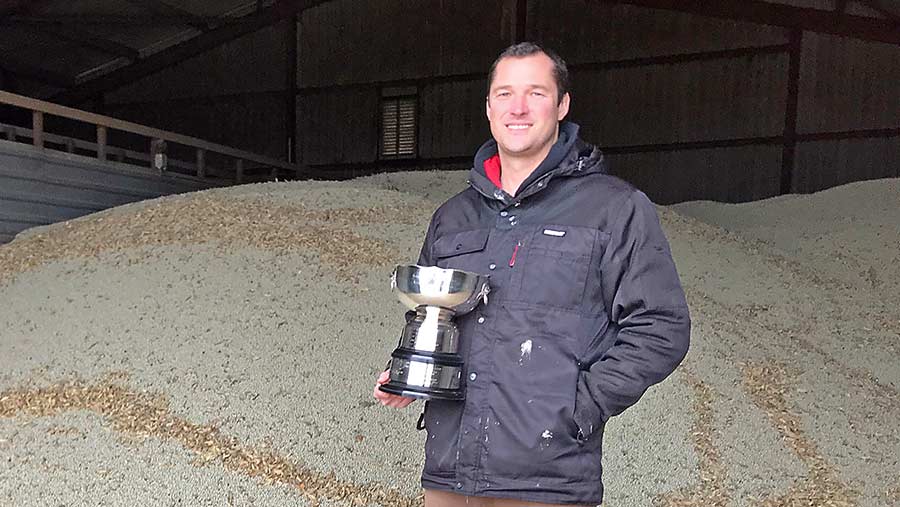 Last season he achieved 2.7t/ha despite the wet spring and dry summer, pulling the four-year average down to 4.2t/ha. While bean yields were very mixed due to the weather, peas can still be consistent, he says.

“Attention to detail with peas will reward you, but peas will also show up any bad farming,” he says.

Removing compaction and drilling early are the two most important factors for good marrowfat establishment.

On the farm’s heavy chalky boulder clay Mr Harrison avoids ploughing if he can, instead using a subsoiler straight after the combine in the autumn to eliminate all compaction.

Conditions must be dry enough; the soil shouldn’t smear, it needs to fracture. Marrowfats will also not tolerate any wet areas, so any mole drilling must be up to date.

Despite the high price for straw last season, all the straw is chopped on the farm as baling would rob the peas of too much goodness.

Mr Harrison sprays the seed-beds off relatively early in December as he finds cover crops and volunteers keep the surface too wet on his soil type if they are kept until spring.

When Mr Harrison’s father grew peas on the farm in the past, he would spring tine to mix up and, hopefully, warm the soil a bit, but this means an extra set of wheels on the land.

Even though he runs a John Deere tractor on flexible side wall tyres set t low pressures, if the land lay is good enough Mr Harrison prefers to drill straight away using his heavy spring tine drill to avoid any unnecessary compaction.

“They must be rolled to give two inches of soil over the peas,” he says. “The chap on the rolls must be keen as they have to pick up all the stones. If you see a stone you have to stop and pick it up.”

Following the loss of linuron, for the first time last season the pre-emergence herbicide Nirvana (imazamox + pendimethalin) was used to clean up a range of broad-leaved weeds including oilseed rape volunteers, and worked very well,

Tropotox (MCPB) was then used in the crop last season to tackle cleavers and charlock, with a graminicide for cereal volunteers.

Although it is possible to drill marrowfats at the end of February, this will prevent the last flush of blackgrass being tackled, and the advice from the PGRO is to wait until the soil has warmed up.

But Mr Harrison has found temperature to be irrelevant, with the more important factor being to get the peas drilled early.

“We try and drill in the first week in March, and we try and combine them in the last week in July, which gets them in the shed as soon as possible to cut the risk and avoid thunderstorms in August,” he says. 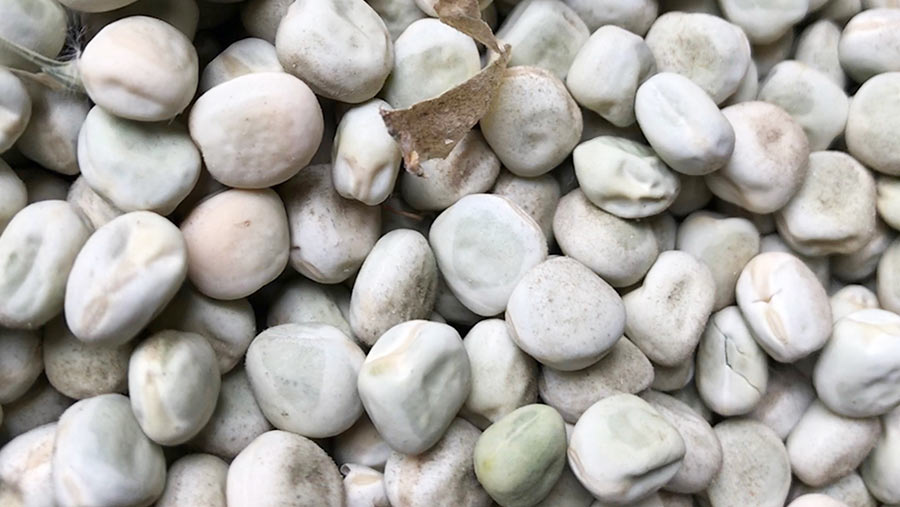 While the wet spring last year did force a later drilling date, rain after drilling is not a problem. In 2014 heavy rain capped the soil but the large seed has lots of energy, pushing through to achieve nearly 4.9t/ha.

The recommended seed rate is 65 seeds/sq m, but Mr Harrison drills at 72 seeds/sq m to ensure the pea crop covers the ground, as the farm is in a particularly dry area.

A thicker crop will also hold itself up, which makes harvesting the 2ft high crop easier, and will also be very competitive against weeds such as cleavers.

In addition to timing drilling and harvest right, spray timings must also be spot on as aphids can be an issue (see box), and vigilance is needed with pigeons.

Being a niche crop, marrowfat peas have limited chemistry options, with the loss of Reglone (diquat) after this season a major blow to pea growers, leaving them with no option but to use glyphosate to desiccate.

Whereas pea growers could have combined four to five days after using Reglone, glyphosate will take two weeks to take effect, increasing the risk of adverse weather in the meantime, and the peas could collapse.

“Committing yourself to a harvest date so far in advance means it will be much harder to get the colour retention,” says Mr Harrison. “We are going to try a bit [of glyphosate] this year, but other growers use it.”

As soon as the peas are under 18% moisture they need to be harvested, as any bright sunshine or rain will affect the colour.

“You need to stop everything, be that harvesting the rapeseed or anything else, and combine them,” he says.

“The peas must also be harvested over a maximum of two days, it can’t be stretched out for a week so there needs to be the capacity in the combine.”

The combine is fitted with a 9m header to ensure that if the peas go flat it can still cut the majority of the crop. If peas go flat and the ground is dry, lifters in the peas will solve the issue.

However, if conditions are wet, combining will result in bulldozing, and also puts the machine at risk from pea dust, which sets like concrete inside the combine. For this reason growers should wait until after a morning dew has dried.

“If you have any dampness in the bottom it all gums up the machine. The elevator flaps need to be taken off every morning and it needs to be cleaned out as often as possible.”

Stone traps also need emptying several times a day, and Mr Harrison recommends taking the cover off the re-thrasher on the returns and dropping it on the floor.

He also slows the drum right down on his rotary combine so that it is gentler on the peas and will keep the skin intact, as cracks will make the peas unusable.

Even after harvest bleaching is an issue, as colour can be lost from the peas through sunlight coming through the shed doors.

Mr Harrison leaves the peas in one shed for a week to allow the moisture level to even out, before shifting them to the drying floor.

The peas can take until spring to dry using an ambient air blowing system without heat, blown across the whole floor at once.

In addition to 250kg/ha of phosphate, Russell Harrison’s agronomist Damian McAuley, from Indigro, uses manganese sulphate to ensure the crop doesn’t develop marsh spot, which causes bruising of the pea and is a quality issue, and to encourage good rooting, followed later in the season by magnesium sulphate.

Botrytis and other spot diseases can be a problem in wet seasons early on – although last season this was largely controlled by conditions turning very dry – as can pea and bean weevils.

An application of Aphox (pirimicarb) is made in July for pea and black bean aphids.