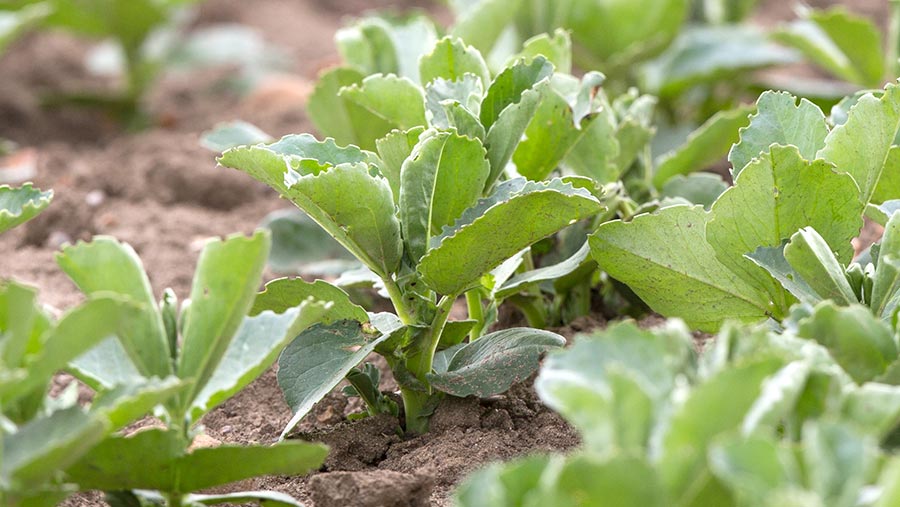 Farm manager Robert Yardley added low-vicine beans into his rotation for the first time last season to ensure he achieves a good price for his spring bean crop.

Mr Yardley usually grows 150ha of spring beans at Birkin Farm, Birkin, North Yorkshire, which is managed by Velcourt, as part of a one-in-six rotation, with the four varieties grown aimed at the human consumption market.

Difficulties controlling bruchid beetle along with the withdrawal of active ingredients means that it is difficult to meet the specification for the human consumption market, leaving Mr Yardley at the mercy of the lower priced feed market.

To mitigate that risk, last season he also grew feed bean Tiffany, as it promises a premium over feed bean prices, while only requiring feed bean specifications.

See also: How to keep on top of spring-germinating blackgrass

The low-vicine spring variety is grown on contract through Agrii for Waitrose, which is using the bean in feed rations in meat and egg production in place of soya imports to reduce its carbon footprint.

“We are producing commodity crops, so you have to know your cost of production and you have to make a margin,” says Mr Yardley.

“With the withdrawal of more active ingredients we have got to manage the risk of things like bruchid beetle differently, and growing Tiffany is part of that choice to reduce risk.”

Mr Yardley’s contract guarantees a premium of £50/t over the feed wheat price at the time of movement, although this season’s contracts have a double mechanism (see below).

His Tiffany beans are still in store, while the rest of his bean crop has already been moved off the farm as he plans to sell them any time between January and May, depending on the wheat price.

“We already have a home for them, so we are not growing them and hoping for a market,” he says. “There is a fixed premium, and we can optimise that with our marketing strategy. The contract gives flexibility on when we move them.”

The Tiffany crop yielded a pleasing average of 4.5t/ha, on par with the other bean varieties grown on the farm, including Lynx and Vertigo, and higher than the 3.5t/ha Mr Yardley was expecting. 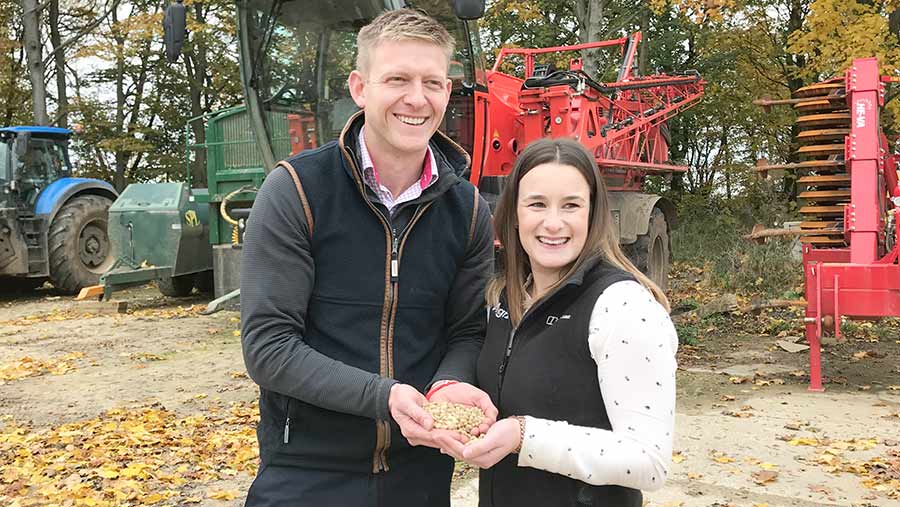 Mr Yardley established his bean crop after a cover crop of vetch, black oats and tillage radish, which was direct drilled in mid-September using a Väderstad Rapid.

Pig muck was incorporated before the cover crop using a subsoiler, and then triple super phosphate (TSP) applied in the autumn, with the beans also direct drilled on 8 March at 60 seeds/sq m.

Mr Yardley only grows about 50-60ha of cover crops a year to prevent soil erosion on his Sherburn Wold and varied loam soils, and to increase water infiltration, organic matter levels and biodiversity.

“The soil was in quite good nick when they were drilled; the beans just seemed to sit there for a while, but then they really got growing,” he says.

Last season was the first time that Mr Yardley had grown a cover crop before beans, and only grew one in front of the Tiffany beans.

Although the cover allowed him to get on and drill the Tiffany beans first, the results were not as good as they could have been, he says.

Cover crops on the farm usually make the soil more friable and allows better rooting, but direct drilling the beans meant the soil was too consolidated, which beans do not like.

Last season he subsoiled the whole Tiffany area to try and improve root penetration through all of the zones, but this season he plans to use a newly purchased Sumo Quatro. He will still subsoil the difficult areas and then use the Sumo on the rest.

Mr Yardley also found there to be an increase in the amount of pea and bean weevil in the Tiffany crop compared with his other bean varieties, which went into ploughed land.

As he has only grown one cover in front of beans, Mr Yardley cannot definitively say that the cover increased the amount of pest damage seen, and acknowledges that some agronomists actually find that covers help reduce the number of weevils. 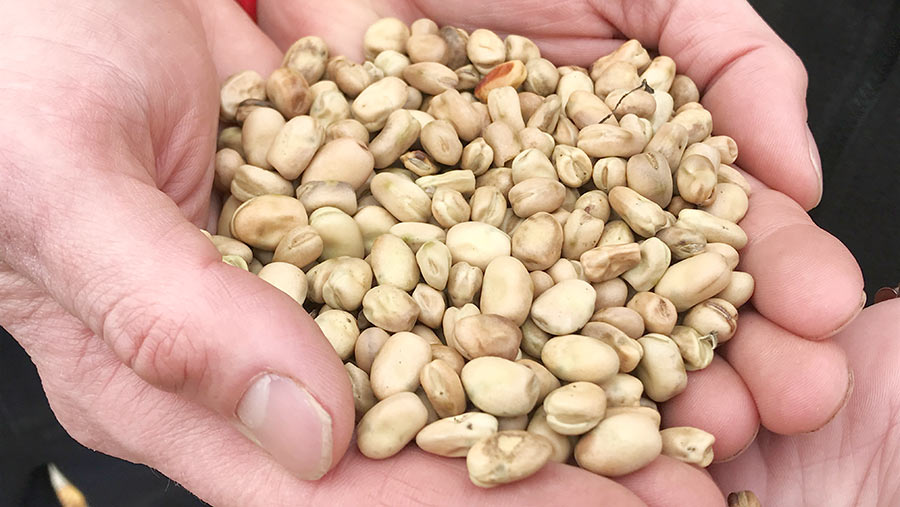 For weed control, Mr Yardley only applied a pre-emergence herbicide consisting of Stomp Aqua (pendimethalin) and Centurion Max (clethodim) to control broad-leaved weeds. However, his fungicide strategy was more extensive.

“We used three applications of fungicide last year as it seemed a high-risk season with the rain and the heat,” he says. “That’s also why we went with a pre-emergence as some fields suffer with bindweed and post-ems are not effective.”

He also sprayed for bruchid beetle to ensure he had a high-quality product, and performed tissue testing in order to put targeted nutrients on the crop.

If Mr Yardley was to sell his crop at harvest, the margin would not be great, considering his spray programme, but if he can sell it in the spring when prices are better, he will be happy.

“Reflecting on what we have done this year, we can improve on that for 2020 by cutting fungicides and also we applied quite a lot of trace elements this year.” he says. “We can probably narrow the fungicides from three to two to manage the cost of product.”

Mr Yardley will definitely be growing Tiffany again this coming spring, and thinks the already appealing contract has only been improved by the introduction of the double premium mechanism.

Growers this coming season will receive either £5/t over the Farmers Weekly feed bean price, or £50/t over the AHDB feed wheat price, at the time of movement.

“We have just come out of a good harvest so the wheat futures wouldn’t have been that good. The futures are now creeping up because of the wet autumn, but this new mechanism allows us to manage the risk,” says Mr Yardley.

“I like the flexibility; it’s a lot more attractive to the grower with both options.”

Waitrose is contracting for 5,000t of Tiffany beans this season through Agrii for use in its livestock rations for meat and egg production.

The low-vicine and covicine beans are being used as a substitute for soya imports to help reduce the company’s carbon footprint after trials revealed the beans did not have an adverse effect on performance when fed at high levels to animals.

This is because the variety has low amounts of vicine and covicine, an anti-nutritional compound that builds up in the cotyledons in beans and is toxic, also causing favism in humans.

Two low-vicine and covicine spring bean varieties joined the PGRO’s Recommended List in 2019; Tiffany and Victus, but contracts are only currently available for Tiffany, as Victus has yet to be tested on livestock.

“People have been staying away from beans due to the problems, but now Waitrose has found a bean that fits and they are keen on the traceability,” says Agrii’s seed manager for the North, Rebecca Gibson.

The feed bean contract has easy specifications for growers to meet, with 15% moisture and a 2% admixture allowed, and no requirements for bruchid beetle.

The contracts for this coming spring season offer two pricing mechanisms to safeguard against slumps in the feed bean price (see above).

Growers can opt into either a September/October or January/March movement period depending on how much storage they have, and will ideally be situated in the East Riding, midlands and East Anglia areas due to the location of the mills.

Tiffany offers a reasonable yield which is on par with other spring varieties, is vigorous, is suited to heavy land and provides a protein of 28%.

“Tiffany is quite a good option, and definitely better than growing a spring bean with no contract as the market can be so volatile,” says Miss Gibson.

“We only have a relatively small volume at the moment, but it is growing – last year was the first year of contract.

“This is probably the direction Waitrose wants to go in to try and replace more soya.”

Agrii expects the contracts to continue into 2021.