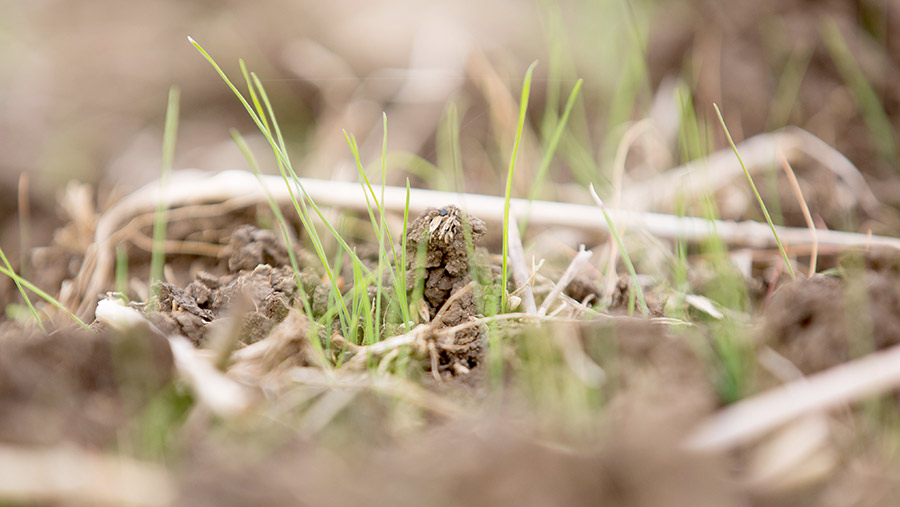 Farmers with a significant blackgrass problem should stick with spring barley this season, as the crop – when managed correctly – offers the best way to keep on top of any spring-emerging blackgrass.

The wet autumn means many growers face an unplanned increase in their spring cropping area, with a number of crops such as beans, peas, linseed, wheat and barley in the running.

Talk of a barley glut may tempt some farmers to grow other options, but Dick Neale, technical manager at Hutchinsons, warns that for those tackling blackgrass, it could compromise their efforts.

Spring beans, for example, offer much less crop competition and there is limited chemistry, with no contact herbicides available.

Spring-germinating blackgrass is being increasingly seen in winter crops, which, if left untreated, could undo some of the progress being made on tackling the weed.

Over the past five years, growers have had a massive effect on blackgrass emerging in the autumn through cultural controls dominated by delayed drilling.

But Hutchinsons’ Dick Neale is seeing more of it in winter crops in the following spring. He points to two different situations.

“First, there are patches of well-tillered blackgrass that you find in an otherwise clean field.” He believes this is down to highly resistant plants that established early and survived the pre-emergence herbicide hit.

These patches may need taking out with glyphosate in early February, when they are still small-tillered plants and before spending on fungicides and fertiliser, or in June, when they are easier to target, with heads above the crop.

The second situation is a low level of single-stemmed blackgrass plants across significant areas and these are the result of spring emergence.

While they are not affecting yield at the moment, the concern is that left untreated, it will become a problem, as it adds to seed return, Mr Neale says.

“With the move to later-drilled winter wheat in February and early March, there isn’t the competitive ground cover you see with earlier-drilled crops.”

Consequently, the more open canopy means there are a few weeks where the sun gets down to the soil and this helps trigger germination.

The move to bigger residual herbicide stacks in the autumn also doesn’t help, as too big a stack or early sequence hurts crops and again leads to more open canopies.

Mechanical weeding may also be a way to control this spring-germinated blackgrass, where row width allows.

Mr Neale highlights Hutchinsons trial results showing that spring barley is the best option, as it is seven times more competitive than spring wheat. “So it has to be spring barley,” he says.

This is especially important when considering that the blackgrass threat could be greater next spring, as the wet autumn conditions have prevented cultivations of areas destined for spring cropping.

Having to do cultivations next spring instead will disturb soil, stimulating blackgrass flushes. 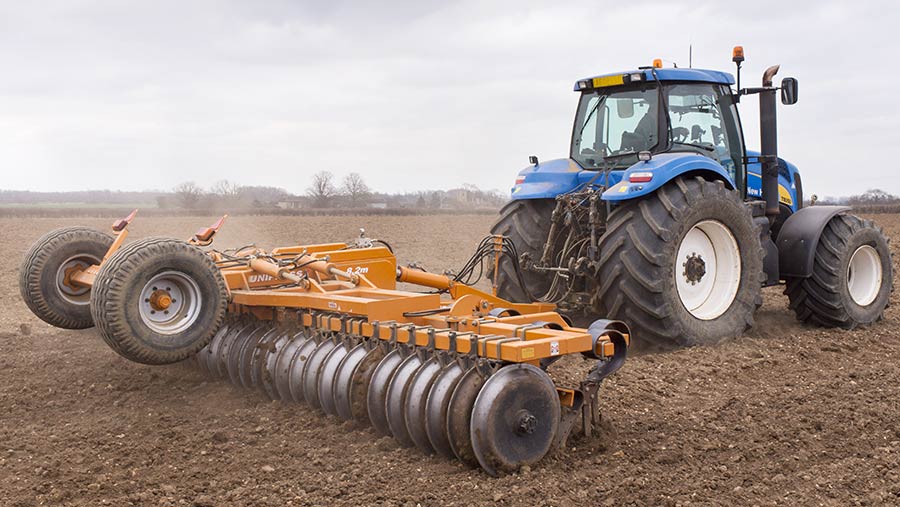 Mr Neale points out that controlling blackgrass in spring is different to the autumn, where delayed drilling is the best approach.

The optimum conditions for blackgrass germination are when night-time temperatures reach about 10C, with an average daytime temperature of 17C, says Paul Neve, principal research scientist at Rothamsted Research.

“It equates to April and September/October,” he says.

However, a lot of spring crops are already in by then, and waiting for blackgrass flushes is not advised.

“Waiting for the first flush in April is the worst thing to do, as you cut out a month’s worth of barley growth and tillering time,” Dr Neve says.

“You then have blackgrass and small barley plants that are struggling in a seed-bed that is drying rapidly out and blackgrass wins.”

Going too early can also compromise blackgrass control, as some farmers discovered when drilling last January, tempted by the dry, mild winter.

The pre-emergence herbicides went on, but blackgrass doesn’t grow in January. Crops took time to emerge and growers had limited seed rate increases, as there was more time for crops to tiller.

However, by the time blackgrass started emerging in early April, the residuals had run out of steam and crops were too open, he recalls.

“That’s  why growers had far more blackgrass in their January-drilled barley.”

The ideal time to drill spring barley is from 20 February and the first 10 days of March. “Soils are a month warmer and day length significantly longer, so crops emerge quicker and residuals are more active with plenty of moisture and the blackgrass has been stimulated by the drill pass.”

However, growers are still underestimating their seed rates in heavier soil types, they need to be robust for blackgrass control.

Many growers aim for 300-350 seeds/sq m. “While 300-350 seeds/sq m may be OK for sandy/lighter land, on stiffer soils, where you are more likely to have blackgrass, putting that number of seeds in could result in only 100 plants/sq m, which is no good.”

That’s because heavy clay soils can see less than 50% establishment. The UK average is 67%, but farmers often assume 85% establishment when buying seed.

Mr Kellie adds that a 40-60g range in thousand seed weight means when growers drill at the same kg/ha rate, there is a 40% variance in actual seed numbers/sq m.

Placing phosphorus starter fertiliser also helps with establishment, regardless of index, resulting in a crop that is better able to outcompete spring-emerging blackgrass.

Mr Neale points to work done in maize and wheat with phosphorus that showed benefits in establishment, but added that it has to be the right form and rate.

Benefits were seen when applying a microgranular product such as Primary P at 10-12kg/ha or the liquid variant, P Focus, at 20 litres/ha. These also supply small amounts of nitrogen, magnesium, sulphur and zinc.

However, if farmers go with a more standard broadcast fertiliser (high salt) and increase rates applied, negative effects can arise in the root zone, resulting in reduced establishment.

There is no evidence that farmers are inadvertently selecting for spring-emerging blackgrass populations by having more spring cropping in their rotations.

Rothamsted Research’s Paul Neve points out that a number of factors determine when blackgrass emerges.

The key driver is dormancy, while genetics and conditions also have an influence.

He recalls work carried out seven to eight years ago, when he was at Warwick University, looking at the proportion of seed that germinated in spring for 30 different blackgrass populations.

Dormancy
The level of dormancy depends on conditions when the seed is maturing; a high dormancy means more will germinate in spring. “If you get a cool, damp June/July, the longer the dormancy,” Dr Neve explains.

“Blackgrass plants are maturing in duller, damper and cooler conditions under the OSR canopy, which appears to increase dormancy.

“Where oilseed rape was in a block this year and we tested the seed, it only had 22% germination.”

Conditions
However, Dr Neve warns not to read too much into dormancy figures, “it is not black or white – rather a case of shades of grey.”

“If seed is in deep dormancy, it does not necessarily mean it will not emerge if given optimal conditions,” he says.

“To break dormancy, seed needs hot, dry weather.” That’s because plants have evolved a strategy to avoid germinating too soon [in August].

“After a hot period [summer], it is more likely there will be wet/moist conditions [autumn].”

“With soil disturbance, blackgrass seed reacts to flashes of light and it triggers germination.”

Toby Kellie of Hutchinsons, who manages the Mollington blackgrass centre, says that is the ideal approach is to cultivate for spring crops in the autumn.

“Then in spring, you just need to run the drill through, with minimal soil disturbance,” says Mr Kellie.