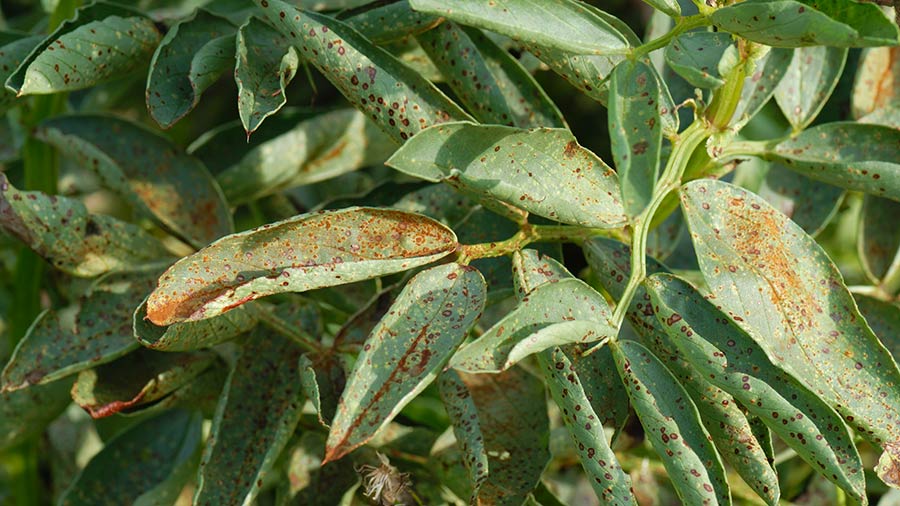 The multisite fungicide chlorothalonil was once the mainstay for chocolate spot and rust control in field beans, but despite its loss, a range of other available actives mean successful prevention is still achievable.

“Growers should aim to keep leaves clean until the end of pod fill,” she says.

Now more than ever, the close monitoring of bean crops and weather forecasts when conditions are suitable is important, since the standard fungicide Alto Elite (cyproconazole + chlorothalonil), which provided good disease control at a reasonable price, is no longer permitted for use (since May 2020) 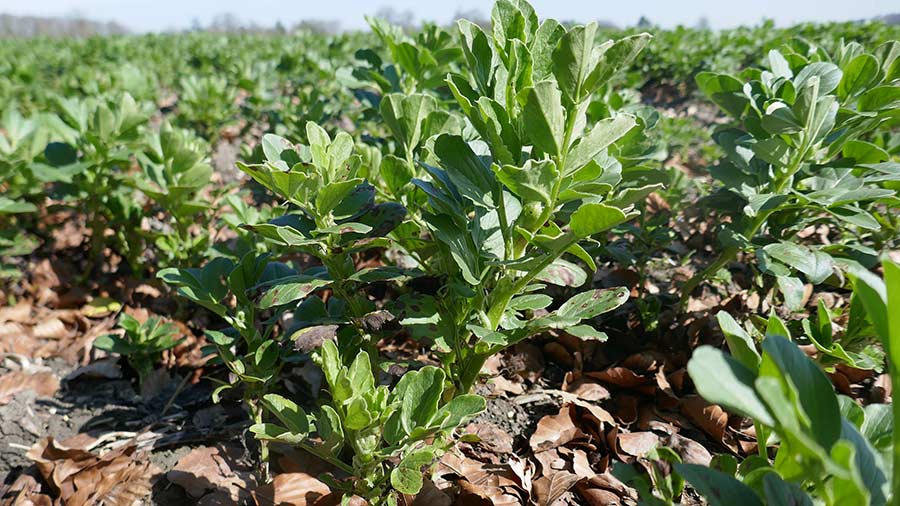 Cool, wet weather conditions provide suitable environments for chocolate spot to develop, whereas rust is a  warm weather disease that rapidly develops during hot days and cool, humid nights, which can cause yield losses of up to 50% and 70%, respectively, says Lea Herold.

“Winter beans are more susceptible to chocolate spot than spring beans, exacerbated by early-autumn drilling and dense crops, which create a more humid microclimate where disease thrives,” she explains.

The effect in winter beans is, therefore, far greater than in spring beans, with spring bean yields considerably less responsive to treatment than winter beans, unless under high disease pressure.

With chocolate spot already reported by growers in overwintered bean crops this season, further cool and wet conditions will favour the disease, which means preventative sprays are likely to be required.

This should be followed by a second treatment three to four weeks later, which is typically combined with bean rust control, using either Signum or azoxystrobin + tebuconazole/metconazole.

Becky Howard, PGRO research and development manager, highlights the choice of actives that are currently approved for use in field beans, which can, in fact, outperform the prior standard, Alto Elite (chlorothalonil + cyproconazole).

“Signum provides good chocolate spot control. When applied at 0.7 litres/ha, it gave the highest yield response in trials – up to 17% versus the untreated plots,” explains Dr Howard.

In contrast, Alto Elite in the same trials gave only a 5% reduction in chocolate spot control infection,       and a 3.5% increase in yield against   the untreated. 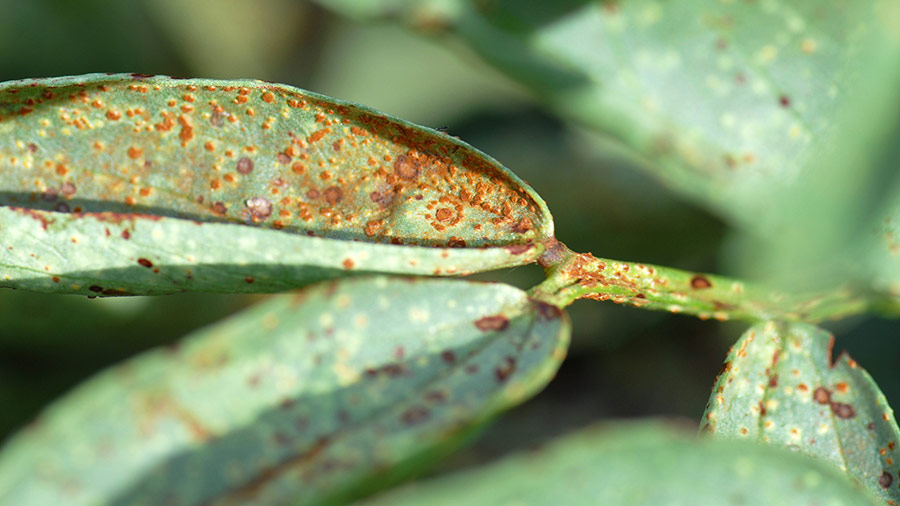 Over the past couple of years, bean rust has become the most dominant disease in field beans, caused by hot and dry June conditions, which favour outbreaks of the disease, says the PGRO’s Lea Herold.

Consequently, chocolate spot trials have recorded significantly less pressure. “Hot days and humid nights can see rust develop very quickly,” she warns. “The development of the first pustules on the leaf to complete leaf coverage can occur in just a few days, which normally takes place from June onwards.”

In severe cases, rust is the most serious of the common bean diseases, with yield losses reaching as high as 70%. The optimum time to spray is at the end of the flowering period. There is little point in spraying beyond the pod-fill stage.

Dr Herold advises using either azoxystrobin, tebuconazole or metconazole, as these are the approved actives for rust control.

Only one application of tebuconazole is permitted for use in beans, so leaving this application until the second spray for rust control may be beneficial to growers.

Dr Herold concludes that from an overall disease perspective, a rotational break of at least five years should be left between field bean crops to minimise the build-up of diseases.

A range of spring bean varieties with different rust resistance scores are available to growers. The higher the number, the greater the resistance to rust – with the variety Viper scoring the highest rust rating of 7, followed by Bolivia, Cartouche and Macho at 6 (see “Rust-resistance ratings” below).

“Data is now available for the first time on the Descriptive List based on trials carried out last year, where more information is set to be collected,” says Dr Herold.

Field bean growers could soon benefit from a new fungicide to prevent infections of chocolate spot and rust.

The product, developed by Syngenta, is based on a combination of the SDHI benzovindiflupry (solatenol) and prothioconazole.

Syngenta technical manager Michael Tait says the fungicide – renowned for its control of rust in cereal crops – is now in the UK registration process. If approved, it will be introduced for pulses this coming season.

“The solatenol-based product will act as a replacement for Alto Elite. Only one application has been applied for, with a maximum individual dose of 0.66 litres/ha in field beans and combining peas, which contrasts with Alto Elite which was approved for two applications,” he says.

Research shows the active targets disease with the greatest effect when used as a preventative fungicide before rust spores penetrate the leaf and develop fungal hyphae within the plant. 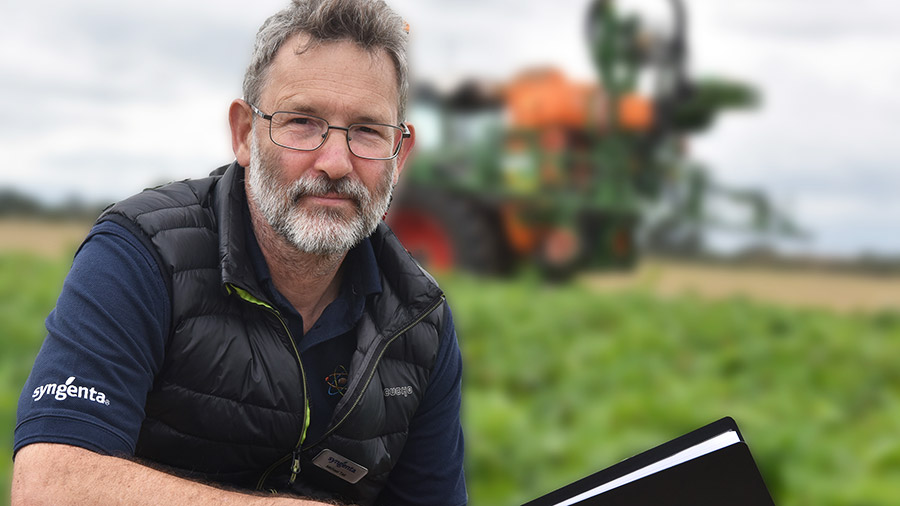 Mr Tait recommends using the new product as the first application in a two-spray programme, at the T1 timing, typically followed by Amistar at T2.

PGRO work in Cambridgeshire showed almost complete control of the disease in all the programmes with solatenol + prothioconazole at the initial timing, followed by Amistar.

In the untreated crop, 45% of leaf area was affected by rust, with the new product performing at least four times better, compared with a two-spray boscalid + pyraclostrobin strategy.

“A two-spray approach of solatenol + prothioconazole at T1, followed by Amistar at T2, outperformed Signum at T1 and T2 for rust control, and provided comparable activity against chocolate spot at least, or equal to Signum.”