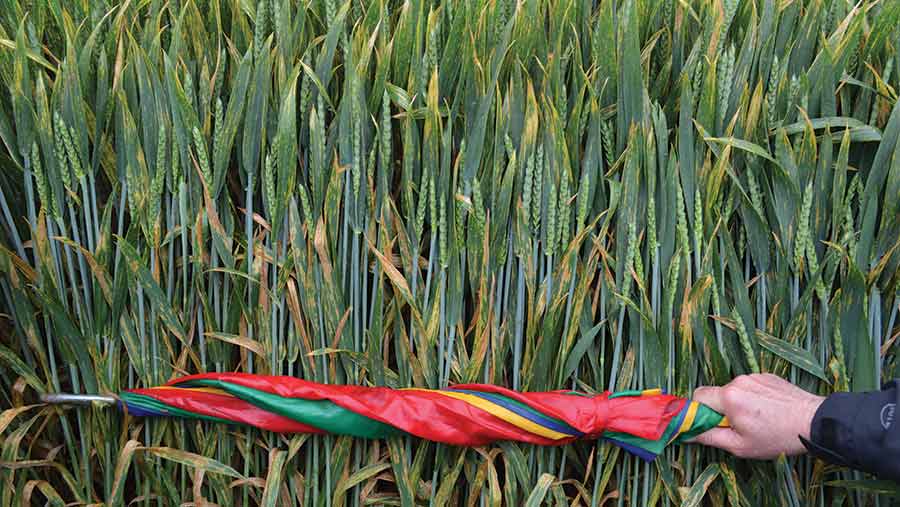 A package of measures is needed to control septoria – wheat’s most damaging disease – involving drilling date, variety, fungicides and trace elements, as the solution no longer comes out of a chemical can.

A generally low disease year in 2015 should not encourage wheat growers into complacency, as septoria can knock nearly 6t/ha off yields in the very worst cases, says one industry expert.

The declining effectiveness of fungicides and earlier drilling has caused the wet weather-loving septoria to raise its ugly head, especially in the heavy rainfall seasons of 2012 and 2014.

David Langton, head of research and development at agronomy and distribution group Agrii, is urging growers to look at an overall septoria management package, while he is looking into new technologies to predict disease levels.

“If we get rain at the wrong time, our current chemistry is not going to do the job. We can not spray our way out of the problem,” he tells Farmers Weekly.

See also: What scientists have discovered about septoria resistance in wheat

With a limited array of azoles, SDHIs and multisite fungicides to control the disease, he is examining the key factors for septoria control, particularly in the wetter West.

The situation with septoria mirrors that with blackgrass, where the declining effectiveness of chemical treatments is forcing a more integrated approach to control the troublesome grassweed.

The average fungicide yield response was 2.7t/ha in West over the past six years, according to Agrii trials, but this can vary from 0.9t/ha in the low disease year of 2015 to 4.5t/ha in the wet 2012.

In the high septoria year of 2014, the group found a 5.8t/ha yield boost in a septoria hot-spot trial in South Wales, where it is screening some 2,000 different varieties for resistance to the disease.

Septoria is encouraged by rain and warm temperatures, with humidity the key driver for spore germination, which explains why the dry cold spring of 2015 saw limited damage from the disease.

The lack of rain and warmth in March and April delayed disease development, and when the wetter weather came in May and June, septoria did spread but it did not have such an effect on green leaf matter as an early infection would have caused.

Some area of Britain, such as Kent, did see rain blow over from France hitting crops in March and April causing early disease pressure, and here the response to fungicides was much higher at 3t/ha.

The integrated approach advocated by Mr Langton involves a number of elements:

When to drill will often be influenced by farming system and location, but it is clear that early-sown crops are infected quickly by septoria, and the disease has more time in the autumn to develop.

Growers need to assume airborne ascospores of the disease are always present in wheat crops from the carry-over from the previous harvest, and rotations or cultivations will do little to control the disease.

Syed Shah, Agrii’s research and development manager for the West, has looked at different drilling dates with two varieties – Crusoe with moderate resistance and Dickens with a poor disease rating.

Most winter wheat varieties on the AHDB Recommended List have septoria resistance scores between 4 and 6 in a 1-9 scoring system where 1 means poor resistance and 9 high resistance.

The new list shows the number of varieties with a score of 7 has now risen to 2 – Siskin and Graham – while there still are no 8s or 9s.

This shows plant breeders are beginning to break the historic link between good septoria resistance and low yields, so growers need to look at newer varieties with better disease resistance, says Mr Langton.

The time taken for a spore to land on a wheat leaf, germinate and infect the plant can vary between two to four weeks depending on the temperature, so protecting wheat leaves is key.

As the azole fungicides have shown a decline in curative – or kickback – action, and the SDHIs tend to have less eradicant activity, the need for protection is clear, says Mr Langton.

The first T0 spray, often applied towards the end of March, has given a yield response of 0.3-0.4t/ha in group trials, so is often worthwhile, while this T0 spray gives more flexibility if a subsequent T1 spray is delayed by poor weather.

Resistance management is also important, and he suggests using multi-sites, such as chlorothalonil, which are protective in action and have not seen any resistance problems.

Mr Langton also suggests stacking and sequencing azoles. For example, in a T1 spray growers might use azole a and b, and in a T2 mix azole c and d.

Finally, Mr Langton advises making full use of the two SDHI sprays permitted in a season.

The addition of elements such as copper, zinc and boron can help green leaf retention and lead to yield increases of 0.3-1.0t/ha, as shown in group trials from 2012-14.

This could give the crop an extra seven to 10 days of green leaves to aid photosynthesis, and will also help the crop tolerate disease.

A shortage of copper and boron has been shown to limit the number of grain sites lost as the wheat plant develops.

These trace elements have been costed at about £18/ha in group trials, and can be applied with fungicide sprays so no extra expense is needed for applications.

The group is working on sensors that could be hand-held or fixed to drones to measure the reflectance of a crop to warn if any factor might be affecting the crop that is not seen by the naked eye.

This work with plant breeder RAGT and Nottingham University could give an early warning of disease problems and make decisions about disease management easier.

A second line of work involves using a DNA probe to ascertain which strains of septoria are present in the crop, as different azoles have differing actions on individual strains.

This backs up the group’s strategy of alternating azoles and could prove useful if some SDHIs start to break down against specific septoria strains, says Mr Langton.