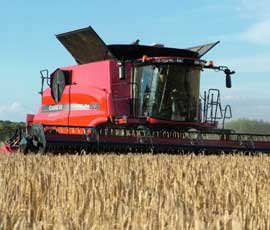 Harvest got under way at JV Farming, Whitcombe, Dorset, on Friday (26 July), but rain has stopped play ever since.

“We had 20mm of rain on Saturday, and it’s rained every day since then,” said operations manager Tim Merry. “We’re unlikely to be on again until Thursday.”

The 8.5ha of Cassia winter barley yielded 7.39t/ha dry over a weighbridge, which was reasonable, considering the growing season.

“It’s better than a kick in the teeth. We can’t complain, as there are plenty of crops looking worse than ours.”

For the first time in 10 years the company was using a Case combine, and the 9230 Axial Flow with a 10.5m header was doing well so far, said Mr Merry.

To date he had sprayed off about 75% of the 440ha of oilseed rape, putting rape harvest at least two to three weeks later than normal.

“We’re going to have a heavy workload by mid-August, as the spring barley, oilseed rape and wheat will all be fit at the same time.”

Mr Merry had 150ha of spring barley to cut at the home farm, and had switched failed winter crops into maize to feed the joint venture’s anaerobic digester plant in place of combinable crops.

“I think we’ll be cutting spring barley before we’ve finished the oilseed rape, but at least we’ve got something to cut.”