A succession of heavy rainstorms in the last week have managed to halt drilling of spring crops on the Revesby Estate, which sits on the doorstep of the Lincolnshire Wolds.

Spring drilling progress had been moving at a decent pace until Storm Katie arrived over the Easter weekend to slow momentum, with work eventually grinding to a stop after 7mm of rain fell on Tuesday night.

Peter Cartwright is farm manager on the 1220ha estate, which is about 20 miles west of Skegness. He tells Farmers Weekly he is happy with drilling progress so far but cool soil temperatures are cause for concern. 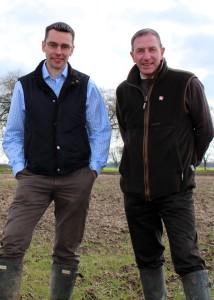 “About 90% of the spring beans are in the ground now and roughly half of the 120ha of spring wheat has been drilled,” says Mr Cartwright.

“We grow spring wheat to help with our blackgrass control so the rest of that probably won’t be drilled until next week.

“I’m more concerned about the low soil temperatures and the wetness of the soils at depth, but the forecast is dry for next week.”

The estate also has 55ha of spring oats and 25ha of sugar beet still to plant. Rain in the last week has brought soil temperatures in the region down to around 5C, slowing the work rate in the area.

Lincolnshire-based Agrii agronomist Richard Butler says the majority of spring drilling on the county’s heathland is now complete, while progress on heavier soils lags far behind.

“Drilling on the heavy silt land in the county is 20-30% done now, and while sugar beet planting is nearly all complete on light land, it is yet to start properly on heavy soils,” he says.

Growers in many parts of the country have suffered setbacks as a result of recent rains and lower soil temperatures.

Spring oats were drilled under dark and threatening skies in Angus, Scotland, on Tuesday.

Drilling Spring Oats. Not much dust, would you believe hail showers? pic.twitter.com/87wN028yHn

It was a race to drill spring beans before rain stopped play in north Norfolk on Easter Sunday.

Keep the Farmers Weekly arable team updated on your spring drilling progress and send in your photos via Twitter by mentioning @FarmersWeekly in your tweets.