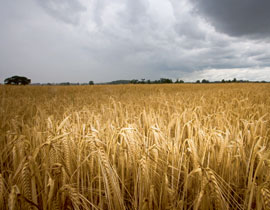 Recent rain is not enough to revive drought-hit cereal crops, landowners have warned.

A drought could mean failed crops and higher food prices, he said.

“We have been experiencing the second driest spring since records began.

“A drought status will mean a crackdown on farmers taking water from rivers to irrigate fields, increasing the risk of failed crops and causing the cost of food to rocket.”

Mr Shirley voiced his fears to farm minister Jim Paice during talks at Cereals 2011 in Lincolnshire.

Reform of the water abstraction licensing system should not prevent land managers from receiving a fair allocation of water, said Mr Shirley.

“Taking water from rivers and reservoirs is vital to ensure good harvests so that we can meet the demands of a growing global population.”

The government is looking to find ways of encouraging and enabling farmers to develop more sophisticated ways uses of water.

Mr Paice said the government was looking at extending grant support to farmers who want to build reservoirs to store water.

It was also looking at making abstraction licences tradable so farmers could sell abstraction rights to other growers.

Elsewhere, some clear spells are developing, but blustery showers will continue across south-western parts of the UK, some of these heavy.

Scotland and northern England will continue to see some rain at times on Saturday.

Elsewhere, the weekend will see a mixture of sunny spells and frequent showers, some heavy and thundery.