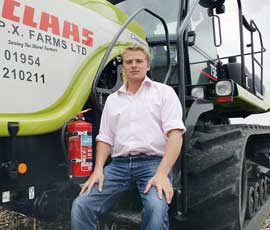 For James Peck, winning Farmers Weekly’s Young Farmer of the Year award allowed him to step out of his father’s shadow and gain recognition as a farmer in his own right.

Since he launched PX Farms seven years ago, James, 34, has seen his company grow from strength to strength – something he believes winning the Young Farmer of the Year trophy has helped with.

The Cambridge-based business now manages 11 farms and 1780ha of land, with 800ha of additional custom farming operations within a 20-mile radius.

Specialising in combinable crops, PX Farms offers 26,500t of grain storage, as well as a haulage operation of eight articulated lorries in contract with Wellgrain.

The business is based at Scotland Farm, Dry Drayton – a 325ha plot owned by his father Adrian, who has diversified and converted disused farming buildings into offices and units.

James contract-farms Scotland Farm and his father takes a prior charge and a percentage of the profits, which has helped him to pursue his diversification projects.

Having grown from a staff of four in 2007, James’ team now consists of 12 full-time, two self-employed, two casual and five harvest helpers.

“Winning the award gave recognition to me and my staff,” James said.

“It gave us confidence that we were doing the right thing and encouraged us to look at new ventures.”

He said he had fond memories of the awards night, which was one of the most memorable for PX Farms.

“The whole team came along on the night and everyone was there to share in the success,” he said.

“The award was not just me – I was just the face of it. Winning was an amazing feeling, which I’ll never forget.

“Plus I got to kiss awards presenter Fiona Bruce. That certainly added to the moment.”

James said being recognised as a winner has given him the confidence to pursue more activities within the business. Last June he purchased 40ha of arable land, he also plans to increase his grain storage capacity to 46,000t, supply a local power station with straw grown on his farms and expand his contract farming.

Upgrading his machinery has allowed James to expand his contract area while cutting costs and lifting yields.

His main crop rotation is wheat/wheat/oilseed rape, but some farms he manages have blackgrass problems on heavy land, which he is taking steps to combat.

“We’re looking at growing different crops to try and change the chemicals that we use and the timing,” he said.

“This year, we have replaced beans in our rotation with potatoes, as beans are not stacking up in the rotation.”

James said winning the award has also provided him with new opportunities.

He is vice-chairman of the Cambridgeshire and Bedfordshire area of the Countryside and Land Association (CLA) and last year he won a Nuffield Scholarship to research controlled traffic farming, precision agriculture and weed management.

The scholarship has seen him travel to countries including Australia, New Zealand, China, Brazil, Argentina, India and the USA.

“Winning the award gave me the confidence to apply for the Nuffield scholarship,” he said.

“That’s what great about winning it – it has inspired me to achieve more.”

• Winning boosts confidence and trust in your farming operation

• A memorable experience for you, your family and your team at the best night out in farming

To enter any of the categories in the 2011 Farmers Weekly Awards, click here, where you can download an entry form, enter online or nominate someone.