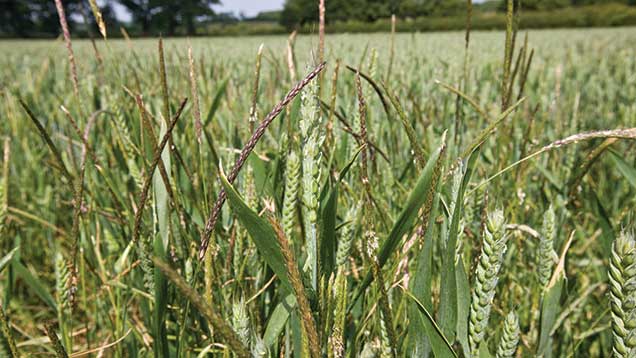 The story is all too familiar: Despite spraying with glyphosate to remove lawns of blackgrass, there are now seedling weeds in the new crop.

Even though generally drier conditions allowed more spraying flexibility and thus more success with pre-emergence herbicides, this season’s crops are threatened by the legacy of years of inadequate control, exacerbated by herbicide resistance, says John Cussans of Niab Tag.

Growers tired of the struggle to control blackgrass have already put the worst-affected areas down to fallow for this winter. Some are planning to put in a spring crop, while others may delay cropping until next autumn, he explains.

Those sowing a suitable cover crop are likely to get the greatest reduction in grassweed populations, according to an HGCA-funded project on added-value fallows. But the type of cover significantly influences seed return and long-term profitability, warns Mr Cussans.

“Cover crops per se are not a silver bullet for weed suppression. Often seed mixes are not suitable for late sowing, which is a prerequisite for integrated weed management involving the all-important stale seed-bed technique, followed by glyphosate,”

There’s a need to tailor approaches to using cover crops to manage grassweeds, but also to reap other benefits, he believes. The aim is to see blackgrass fall to manageable levels and to improve soil structure, fertility and biodiversity into the bargain.

The project is evaluating agronomic benefits and linking that to cost data from previous work, to maximise profitability from various covers. Scientists at Rothamsted Research and NIiab Tag are developing recipes for different situations, with the proposed rules for ecological focus areas (EFAs) in mind.

So far, the covers that best enhance weed suppression and deliver additional benefits to heavy soils typically infested with blackgrass are mixes of grass and broad-leaved species.

“To exploit early competition with weeds, a cereal component such as rye, triticale or oats appears to be important. This also serves as a nursery crop to allow a legume to establish without being outcompeted by blackgrass. A legume component adds nitrogen-fixation benefits to the system, improving fertility for the next crop,” says Mr Cussans.

Contrary to previous thinking, a legume can offer a worthwhile nitrogen boost in less than two seasons. The most effective species for the short term are vetch, crimson clover and white clover, he suggests.

“Herbicide-resistant blackgrass poses a threat to the sustainability of conventional winter cropping rotations. To counter the problem, in the worst-affected areas growers are using cultural approaches such as fallowing or switching to spring cropping. This project is investigating which cover crops can bring extra benefits on top of weed management, such as improved soil structure and fertility.”

Other potential added-value benefits of fallow include improvements to soil structure and pollen/nectar resources for pollinators.

But the focus remains on suppressing blackgrass, and its level in next autumn’s winter wheat crops following the different covers will be telling, says Mr Cussans.

Once all trials results have been gathered, recipes will be produced with recommended weights of different seeds for all likely field situations, alongside advice on the most cost-effective management techniques to employ, such as the value of mowing and ploughing versus min-till.

“We are confident we can formulate long-term remedial action to help growers weed blackgrass out of their fields while adding value in other ways,” he concludes.