Progress in pea breeding has been particularly encouraging the launch of the 2009 lists, funded by the 75p/t traded PGRO pulse levy, showed.

Figures from technical director Anthony Biddle showed UK spring bean plantings had nearly halved since 2001 and the area of peas had slipped by about two-thirds. But UK demand for peas was more than twice last harvest’s output and there was plenty of scope for more bean growing.

Already, with the protein supplement payment of about £44/ha (£18/acre) still in place for 2009, there were signs of a revival for next harvest.

“Indications are that the winter bean area has increased by 30-45%, spring beans sowings are likely to increase, and there’s tremendous interest in peas,” said Dr Biddle. “The main factor is the high price of nitrogen fertiliser.”

Indeed Prophet, the top yielding now fully recommended large blue, gave 13% more than Nitouche introduced in 1999. “That’s a 1.3% a year increase, which has to be a good story.” 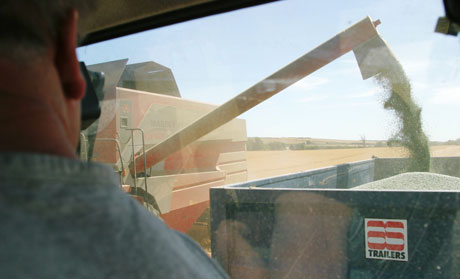 Pea yields have climbed 1.3% a year in a decade

Progressing to their second year of provisional recommendation are large blue types Crackerjack and Bluemoon, and marrowfats Sakura and Falstaff.

All three newcomers, provisionally recommended Gregor, Respect and Aviso, were white-seeded with long or very long straw, an attribute which helped when crops lodged, said Mr Belcher. “It means the combine can grab them and pull them in.”

Gregor tops the trio for output, almost matching Mascara. The others offer about 3% less – on a par with Ragtime – Respect standing very well and Aviso having joint top downy mildew resistance with Mascara.

Bilbo, Samson, Venture and Nitouche were all now classified as outclassed, and Rocket and Raptor were withdrawn from RL consideration by their breeders, said Mr Belcher.

Looking ahead none of the five varieties entering RL trials from National List work are white-seeded. “There are some good ones among them, but this is the first time we’ve had no white peas coming through. UK demand is for green-seeded types.”

Listing changes to the bean recommendations, NIAB’s Simon Kightley said it was a similarly reassuring picture.

In fully recommended winter variety Wizard and spring type Fuego, with 85% and 87% of their respective seed production areas, growers had two “outstanding favourites”. Both have pale hilums giving them premium-earning export potential.

Arthur, which slightly outyields Wizard, but has a black hilum ruling it out of export markets, becomes fully recommended.

The only winter newcomer, provisionally recommended Sultan, matches Arthur for yield but has a pale hilum. It is also earlier than Wizard and stands slightly better.

Fuego’s share of the spring seed market reflected growers’ confidence in the variety, said Mr Kightley. “Farmers don’t like varieties that shine once and then evaporate. They want consistency.”

Memphis and Betty advance to their second year of provisional recommendation. But their output relative to Fuego has slipped back slightly.

Its yield is only slightly adrift of the other pale hilum types, with the exception of Fuego, and it has a good set of agronomic features.

Despite its pale hilum, it is unsuitable for human consumption because of its dark skin, noted Mr Kightley.

“But it could be attractive in home-produced rations, without treatment, for pigs and poultry.”

However, enough seed for commercial production would not be available for three years, said Dr Biddle.

Ben stays fully recommended, and the only absentee from the new spring list is Syncro, withdrawn by the breeder.