Farmers across the UK have seen their businesses hit by rain for the second summer in a row as the country faced its wettest August for nearly 100 years.

The UK totted up 95mm of rain for the first 17 days of August, compared with an average of 85mm for the whole month.

South-west England, south-west Wales, east Scotland and Northumberland were some of the hardest-hit regions, seeing more than double times the average monthly rainfall in the first half of the month.

Ulster Farmers’ Union said much of the damage had been caused after rivers had burst their banks.

“It’s had a very serious financial effect on farmers and we are only just receiving reports of how serious the damage has been,” an UFU spokesman said.

A meeting had been called with ministers to examine what compensation was available to farmers, he added.

Robert Magowan, a potato farmer from County Down, had 16 acres of topsoil washed away from his farm after flash floods.

His potato crop, worth about £60,000, was ruined after being submerged under 5ft of water. 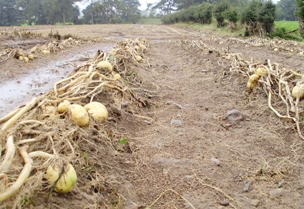 At least 50 sheep were also reported to have drowned at another farm in the region following flash floods.

In Wales, cattle were marooned in Towy Valley, Dyfed, an area that usually only floods in winter.

Meirion Hughes, a dairy farmer in Carmarthenshire, said the wet weather had caused havoc across the region. “We can’t take tractors onto the fields and we can’t make silage,” he said.

“There’s concern because the cattle are poaching the fields, making a mess.

“It will affect yields and with the cold, wet rain on their backs my cows should be in, but we don’t know how long the winter will be and whether we will have enough forage.”

Despite concerns, the outlook was more promising for next week, a Met Office spokesman said.

Better weather was forecast for the weekend and on into the middle of September, particularly in the south and east where high pressure was beginning to build, he added.