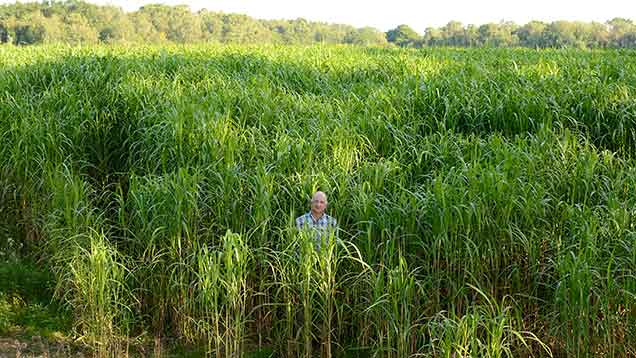 A Norfolk arable grower has harvested a record yield for miscanthus this year, despite the crop being less than two years old.

In a season that has seen record yields for wheat and oilseed rape, it seems the energy crop has also benefited from the good growing conditions.

Bill Lewis achieved an average 8.82t/ha, which according to biomass company Terravesta is the largest documented yield for a second year crop to date.

Typically, the first miscanthus harvest comes three years after planting, and is around half this tonnage, explains Andy Lee, Terravesta farms advisory manager.

This yield increases each year, to mature crops yielding 12-18t/ha for the rest of its 20-year plus crop life.

Mr Lewis decided to plant 15ha in 2013 in a field that historically was poor permanent pasture and prone to flooding.

“We tried growing winter wheat, sugar beet and linseed, but they all failed.

“It’s the sort of land that’s difficult to establish crops on, due to waterlogging. The land is low lying, at six metres below sea-level, so the surrounding land drains into it.

“This meant we were spending a fortune on preparing the seed-beds, and on inputs,” he says.

Mr Lewis puts the bumper miscanthus yield down to careful planning, good seed-bed preparation and aftercare for the first 12 months after planting.

He achieved 90% establishment and good weed control was key to control twitch grass and meadowgrass.

“We also erected fencing to ward off rabbits, which can be a threat to the crop early on,” says Mr Lewis.

Next year, he expects the yield to double, with thicker canes and more of them.

“This year we’ve planted another 15ha and plan to add 4ha in the future,” says Mr Lewis.