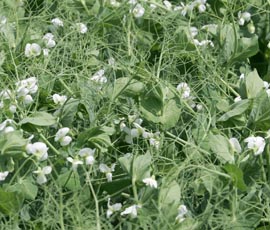 Monitoring crops for pests is a key priority for our agronomists this week as they look to protect crops already stressed by the weather.

Spring barley is being particularly affected with leaf beetle larvae scraping away “windows” of green leaf tissue, says UAP’s Will Foss. “In crops which are under significant stress it seems worth trying to reduce pressure from these pests with a foliar insecticide added to the T2 fungicide and foliar nutrient.”

After last year’s experience of silver Y moth and dry conditions, this year’s beet crops will be monitored for caterpillar damage over the coming weeks.

Down in Kent, Masstock’s Colin Sharp says some decent rainfall in June will do wonders for morale. But even if they get it, wheat yields look like being down by various amounts, depending on soil type. “Therefore, our management focus has shifted to making the most of every grain, maximising crop quality and minimising harvesting losses. Because we know it will rain sometime, we’ll be protecting wheats that are good enough against fusarium with a decent triazole at T3. For those planning to apply foliar urea on their milling wheats to boost protein I would suggest it still has to be worthwhile.

“The last thing growers can afford is to lose both yield and bread-making premiums.”

In the west, Countrywide Farmers consultant Neil Donkin’s attention is turning to spring-sown crops. “With winter crop treatments nearly finished, don’t forget the spring crops. They may have been badly affected by the drought, but they are of potentially high value, so need looking after.”

Potential threats over the next couple of weeks include pollen beetle in oilseed rape and flea beetles in linseed. Linseed crops are struggling to survive, with emergence very patchy, and can do without the extra stress.

Peas and spring beans are in flower, so check for aphids. Rust may become a problem later in spring beans and it is usually advisable to apply a two-spray fungicide programme, starting during early flowering.

However, in the north it’s been a case of severe winds leaving crops battered and extremely dewaxed. AICC agronomist Hamish Coutts has seen signs of scorch on cereal crops sprayed soon after the damage occurred.

Most oilseed rape crops had finished pollination, so the premature removal of the last of the petals should not have too great an impact on yield. “However, if the weather settles down and temperatures increase, we will need to check for aphids.”

Potato crops are moving on apace. The rain came in time to allow residual herbicides to work effectively. Growers should now be planning their blight programme around the products that have performed strongly in the Eurofins trials, bearing in mind the presence of more active strains of the fungus.

Read the agronomists’ full blogs on our dedicated web page.