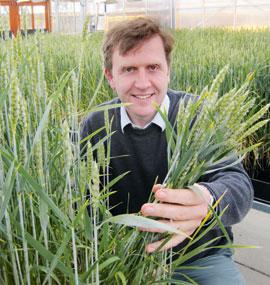 The past five years have seen a dramatic move into Group 4 feed wheats and they now account for 55% of all UK wheat seed sales, according to figures from Nabim.

But in middle England, Group 4 wheats take an even greater share at 68% of wheat seed sales.

However, middle England growers, who account for 61% of English wheat according to DEFRA, cope with much wetter climates than their eastern counterparts.

As a result, septoria tritici is the biggest disease threat, so a feed wheat variety that offers good resistance is vital, Mr Torr says.

“They also need varieties with particularly good Hagbergs and sprouting resistance and standing ability is a critical consideration,” he adds.

“But probably the most important requirement is robustness – an ability to perform consistently under any conditions.”

In difficult years there can be as much as a £20/t difference between top and bottom performing varieties in the feed wheat market.

Robust Group 4 varieties, such as Gladiator and JB Diego, are still favoured by many because they offer consistent yields even in a poor harvest.

With this demand for reliable varieties in mind, RAGT Seeds has bred Relay, a new hard milling Group 4 wheat aimed at coping with less-than-ideal conditions, but still able to offer consistently high yields.

Relay, a cross between the two hard feed wheats, Gladiator and Vector, is currently in Recommended List trials and up for full recommendation this November.

Two years of National List trials show that Relay is giving competitive yields across all regions, with an average treated yield of 105.2%, positioning it only slightly behind the control variety Oakley, on 107.2%

Ed Flatman (pictured), senior wheat breeder at RAGT Seeds, says Relay is slightly behind Oakley in terms of yield, but it has significant other benefits.

Relay offers high tillering capacity and short, stiff straw, he says. “Over the two years of National List trials, Relay has performed well and we would expect the lodging rate to be a good seven or eight, with or without a plant growth regulator.”

Relay has a high Hagberg falling number (248), placing it only behind Diego on 288. “It’s a variety with a good Hagberg, decent specific weight (76.3) and good white flour, which is good for blending,” says Mr Flatman.

Relay has good disease resistance, with a yellow rust rating of nine and a septoria rating of six. Although there is no official data, Mr Flatman believes it would score six/seven for fusarium resistance.

Relay is early maturing compared with other feed wheats, he says. “That gives greater flexibility and security, especially harvest conditions are difficult.”

Speed of development is medium to late, which would relate to an early sowing date of around the second week of September onwards, he adds.

Tillering capacity and ground coverage has been increased with Relay, especially compared with Gladiator, which can help with blackgrass control, Mr Flatman says.

Second wheat performance is also strong with Relay. In National List trials the variety yielded 4-5% higher than Oakley and Alchemy.