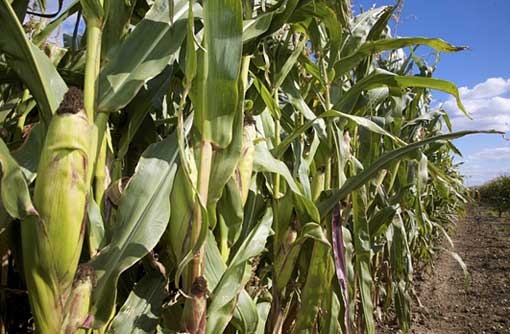 Scientists have discovered that maize crops emit chemical signals which attract growth-promoting microbes to live among their roots, which could eventually lead to a novel approach against soil-borne diseases in cereals.

This is the first chemical signal that has been shown to attract beneficial bacteria to the maize root environment.

The BBSRC-funded study was led by Andy Neal of Rothamsted Research, Hertfordshire, and Jurriaan Ton of the University of Sheffield’s Department of Animal and Plant Sciences. By increasing our understanding of how cereals interact with micro-organisms in the soil, their research aims to contribute to ongoing efforts to increase cereal yields.

This research could be particularly useful in the fight against soil-borne pests and diseases. By breeding plants that are better at recruiting disease suppressing and growth promoting bacteria scientists hope to reduce agricultural reliance on fertilisers and pesticides.

“Now we have evidence that certain bacteria use these chemical toxins to locate a plant’s roots,” says Dr Neal. “The plant benefits from the presence of these bacteria because they make important nutrients like iron and phosphorous more available and help by competing against harmful bacteria around the root system.”

Dr Ton adds: “The next important step is to obtain a molecular blueprint of the microbial communities that are shaped by these root chemicals, and to investigate what beneficial impacts these microbes have on plant growth, plant health and soil quality.”