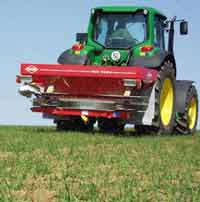 Last year’s unwelcome surge in nitrogen fertiliser prices, especially of liquids, has at least made many arable farmers much more aware of different input options, not least in the arable heartlands of East Anglia, says a Strutt and Parker adviser in Cambridge.

“They’re now a lot more flexible,” says Jock Willmott. When prices rocketed last autumn, many big farms wanted to save cost and switched to solid applications based on granular urea, he says.

Whether their moves were fully cost-effective will become clear only at harvest, especially given the dry spring, acknowledges Mr Willmott. Until last year up to half his clients in Bedfordshire/Cambridgeshire employed liquids for nitrogen dressings. “But they’re now much more aware of their options when it comes to buying and applying their inputs.”

From Cereals 2008 through to December N in liquid form cost as much as £1.20/kg, he notes. By contrast N bought as granular urea at £400/t in September/October was under £1/kg and by February/March it was nearly half that. “By then you could get 46%N granular urea for £240/t.”

Even the relatively small early savings gave machinery manufacturers a welcome boost, he notes. “A lot of people jumped in and went out and bought solid fertiliser spreaders – mostly Amazones and Kuhns.”

The telling point is that none has regretted the decision, says Mr Willmott. “Nobody’s come back and said it was £12,000 or so wasted.”

Most of their machines can spread to at least 32m and are fitted with variable-rate equipment allowing them to be used to apply phosphate and potash selectively on fields to even up indices, he adds.

So after the dry early April and recent windy weather, which in theory could have led to rather more N losses to the atmosphere through urea volatilisation than usual, is he not concerned that some crops may turn out to have been under-fertilised? “Yes, it’s a possibility. And if we see striping in crops I’m sure there’ll be growers asking questions.”

But by recognising urea’s limitations, most people should have been able to avoid both problems, he believes. “All the usual caveats apply and you really do need to calibrate your spreader carefully, especially if, as some people have been doing, you’re spreading over 32m tramlines.”

Distributing urea evenly over such distances requires uniformly good samples, he stresses. “Urea can vary enormously, so you need a good relationship with your merchant so that it can be replaced if it isn’t satisfactory. Something that’s come from the bottom of a boat may be OK over 24m, but not wider.”

Urea is the main source of N for most countries, he notes. “Only the UK uses ammonium nitrate on any real scale.”

Some growers get satisfactory results in winter wheat using solely urea, but S&P advice is to confine its use to the first two dressings. “We recommend using urea and sulphur for the first two splits, in February/March, and, say, mid-April, when conditions are usually a lot less likely to cause volatilisation. It’s then better to use solid ammonium nitrate or liquid for the third split to help reduce potential losses and ensure more of the N will be getting into the crop.

“Yes, the weather this April wasn’t great and we could have experienced more losses than usual. But they’re hard to quantify and trying to adjust for them really isn’t practical. Besides you could run into trouble with your Nmax and RB209. It’s just a risk you run with relying on urea.”

The bottom line is that the experience of this season, with its violent swings in fertiliser prices, has opened many more people’s eyes to the alternatives available when it comes to getting nitrogen into their crops, concludes Mr Willmott.

inset] [JODIE MIGHT BE ABLE TO FIND A BETTER PIC of a KUHN or AMAZONE?]