With a rapidly growing population, the world is increasingly dependent on our ability to develop and maintain sustainable agriculture and healthy environments. Working with farmers, agricultural professionals, pest management experts and others, it is our role to help make this possible. That’s why we invest in a strong R&D pipeline and broad portfolio, including seeds and traits, chemical and biological crop protection, soil management, plant health, pest control and digital farming.

Yield is at the heart of the business for Toby Hogsbjerg, Farm Manager of the Wicken Farms Company in Norfolk and, in on farm winter wheat trials, Revystar® XE at T2 has consistently given higher yields than farm standards, delivering over 1 t/ha extra yield last year.

Mr Hogsbjerg values Revystar® XE’s longer lasting disease control at T2 which gives excellent protection against septoria, including shifted strains, and broad-spectrum control of other diseases for protecting yield more than any other fungicide.

Drought last spring and summer meant there wasn’t much disease for Revystar® XE to tackle. It did, however, deliver in terms of physiological effects, with the Revystar® XE treated area visibly greener.

Sampling confirmed a consistent trend over double the % green leaf area (GLA) from this treatment in mid-July.

Maintaining a high green leaf area in the upper leaves for as long as possible is key to realising a high yield because during grain filling, around 70% of sunlight is intercepted by the flag leaf and leaves 2 and 3.

In Mr Hogsbjerg’s trial a combination of higher thousand grain weight and over 20% more grains per ear from the Revystar® XE treatment resulted in a yield benefit of 1.05 t/ha above that of the competitor treatment.

While the T1 fungicide protects the crop’s yield potential, the T2 fungicide ensures that potential is fulfilled whatever the season may bring, as Mr Hogsbjerg’s trial illustrated.

Robust curative activity combined with reliable persistence are the key requirements of a T2 fungicide and Revystar®XE delivers both, combining the first Isopropanol-Azole Revysol® and the leading SDHI*, Xemium®, ensuring best in class septoria control, even against current resistant strains.

For curative activity the fungicide has to follow the disease inside the leaf, the quicker the better and although Revysol® has very low water solubility, BASF chemists have produced a patented formulation allowing its rapid uptake ensuring market-leading rainfastness.

The rapid uptake doesn’t mean the fungicide’s longevity of performance is limited, the opposite is in fact the case, with Revysol® exhibiting longer lasting efficacy than the next best DMI prothioconazole in trials.

Once inside the leaf, Revysol® forms an inner leaf reservoir just below the surface. From here, its low solubility ensures only small levels of active substance are released, allowing the active ingredient to be gradually redistributed by translocation to the leaf tip. 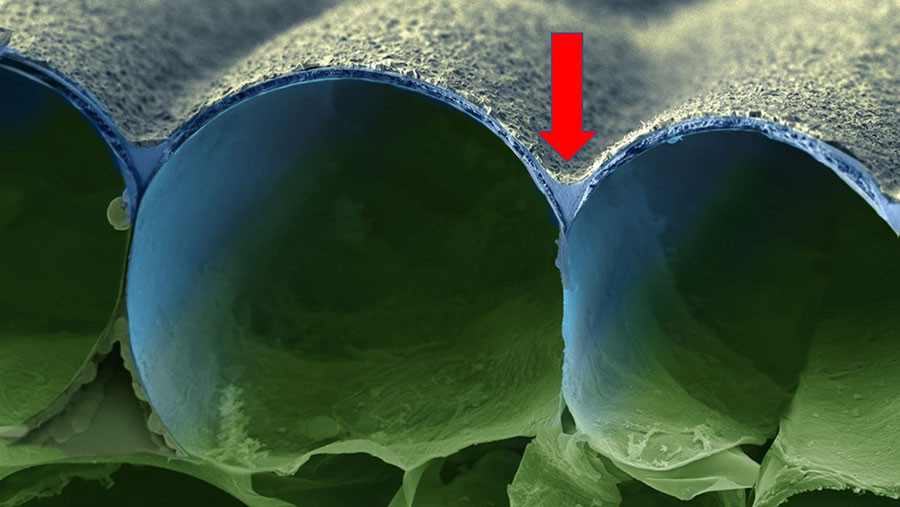 At a cellular level this gives incredibly effective disease control and leads to the fungicide’s persistence. Crops visibly stay greener for longer and this translates to more yield due to a longer grain filling period.

Importantly, 65% of Revysol® applied is taking into the leaf within 24 hours (24x quicker than prothioconazole), protecting it from other environmental influences like UV light and temperature.

Unlike conventional azoles, where uptake and activity can be limited by cooler temperatures, Revysol® is consistent under varying conditions, giving growers increased flexibility to go spraying without having concerns over reduced efficacy.

Delays to the spraying programme are, however, often unavoidable due to weather or mechanical breakdown but with Revystar® XE growers can have confidence in this product’s flexibility in terms of timing.

Last year in trials, BASF treated an early drilled crop of septoria susceptible KWS Barrel, with Revystar® XE at a severely delayed T2 timing to scrutinize its performance at sub-optimal timings. This was the only fungicide the crop received.

Disease assessments of the plots four weeks after application found no visible disease on any of the flag leaves.

There was some active septoria on Leaf 2 but compared to the untreated plots where the infestation of septoria was extremely high the curative activity from Revystar® XE in this scenario was excellent.

In a programmed approach, Revystar® XE and Ascra® Xpro treatments were compared using standard doses at T1, and a severely delayed T2.

Revystar® XE treated plots had less septoria on both leaf 2 and the flag leaf than those treated with the competitor product illustrating that the extended T2 timing really stretched the control that is achievable with the Ascra® Xpro whilst highlighting that growers can have confidence in Revystar® XE’s flexibility of timing even when T2 is severely delayed.

Find out more about Revyweather.

Find out more about the Virtual Trials Tour.

This year BASF are again giving growers the opportunity to win a range of great prizes, and also bag the top prize, a state-of-the-art drone, plus full training by simply scanning cans of Revystar® XE.

Scan early, before the 30th of April to double your chance of winning some of these prizes.

Revystar® XE and Revysol® are registered Trade Marks of BASF. Revystar® XE contains Revysol® and Xemium®. Revysol® contains mefentrifluconazole. Xemium® contains fluxapyroxad. Ascra® XPro contains bixafen, fluopyram and prothioconazole. All other brand names used on this site are Trademarks of other manufacturers in which proprietary rights may exist.
Use plant protection products safely. Always read the label and product information before use. For further product information including warning phrases and symbols, you can refer to www.agricentre.basf.co.uk