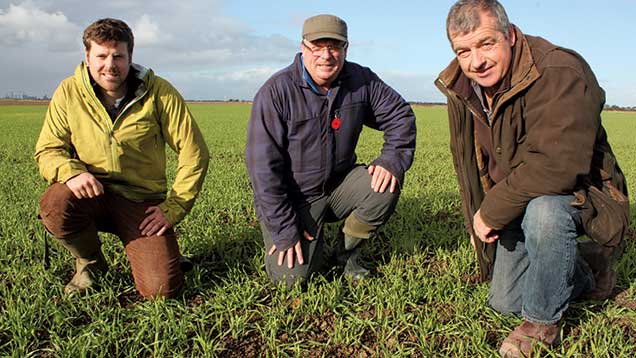 Rotational flexibility is the crucial factor for one family farming business looking to banish their blackgrass blues and stay on top of the problem grassweed for good.

Like many growers across England, father and son Toby and Richard Annison have seen blackgrass become increasingly difficult to control across their 235ha farm just east of Hull.

It’s clear that these second and third generation farmers, working the land together, have the passion and determination to win over the weed and maintain their profitability by whatever means.

Toby explains that blackgrass has been present on the land for many years, but they hit a critical point a decade ago when the reality hit that it could no longer be controlled with chemicals alone.

“This area has quite a bad reputation for blackgrass and Atlantis gave us a lifeline for a few years, but now any useful control has gone.

“It’s not easy to quantify how much it has been costing us, but in the worst patches it can take the wheat yields down to almost nothing and you just can’t farm like that,” says Richard.

The farm sits on the edge of Paull village, stretching down to the Humber estuary under the gaze of the Vivergo biofuel refinery and consists of light, silty soils, but also heavy Holderness clay.

It used to grow winter wheat for milling, but since the blackgrass increased in numbers, keeping ergot out of the sample made it increasingly difficult to make the spec.

Oilseed rape has also taken a backseat on the farm, as historically it has been hard to establish well on their land. Combined with a falling commodity price and increasing production costs, it is becoming more difficult to make the crop pay.


Richard says that like many farm businesses, the most profitable option has always been the one taken, with early-drilled wheat forming the basis of their rotation.

“Getting the wheat crop in the ground and established in early- to mid-September and throwing all the inputs at it was fine before, but the yield isn’t there now with blackgrass.

“It isn’t all doom and gloom and it’s not everywhere, but I drive the combine and it’s pretty sickening to see the yield monitor drop from 10t/ha to 2.5t/ha in the worst patches,” he adds.

The Annison’s 10-year wheat average is about 9t/ha and Toby points out that should be nearer to 10t/ha and he puts it down to the blackgrass above anything else.

“You can get to May and think you’re on top of the problem and then it comes through the crop and you need to get out with the Roundup and spray it off.

“We’ve avoided that apart from the odd small patch because the crop is such a big investment up to that point, but we realised we needed to do something different.”

Autumn 2010 saw the first serious change in rotation, with winter beans replacing winter oats – a crop that had limited options for chemical blackgrass control at the time.

The farm’s agronomist for 30 years – AICC member Simon Senior – says that the crop’s later drilling date and ability to use chemistry such as propyzamide that has no known resistance issues were a factor in its introduction into the rotation.

After a success story in one bad blackgrass field, the signs for winter beans were encouraging, but inconsistent results followed.

Mr Senior puts that down to blackgrass germinating from depth in their plough-based system, not allowing the propyzamide to be absorbed by the blackgrass plants.

“Winter beans can also be difficult to sell so we decided to switch to spring beans, which over five years have yielded around the same as winter and produce a better colour for the human consumption market,” he adds.

The switch to spring beans gave a better opportunity to use broad-spectrum herbicide to kill blackgrass ahead of sowing and the next spring crop to be introduced was spring barley.

After earmarking a blackgrass field for winter wheat, but planning to drill late, the weather turned and they didn’t get the opportunity to drill ahead of a wet winter.

Richard explains that after the prepared seed-bed was left over winter, spring barley was drilled straight into it after a glyphosate application to tidy up any weeds.

“There was a very small amount of blackgrass in the tramlines, but apart from that there was more or less none in the crop itself.

“When a field is clean at harvest like that, we top work the ground for the following crop instead of ploughing to disturb as little blackgrasss in the soil as possible,” says Richard.

As spring barley proved its worth, spring wheat was the next crop to do the same, with the catchy weather that can render the farm’s Holderness clay unworkable again intervening.

Two fields with a history of blackgrass were scheduled for first wheat after spring beans and as the weather worsened, only one could be drilled.

“The other was left over winter and drilled with spring wheat and the spring crop out yielded the winter crop. It also had significantly less blackgrass at harvest,” says Richard.

All this has given them the confidence to use spring cropping across the all the farm’s soils and since taking the decision to change the rotation in 2010, spring beans, barley, wheat and oats have all been drilled with success.

Economics will largely dictate which crop goes in the ground and Toby acknowledges that in the future, not every year or every spring crop might be as successful, but he believes flexibility is the key to keeping on top of the weed.

It is known that for spring crops in most years, a yield penalty will be incurred over its winter-sown relative and therefore the bottom line won’t be quite as healthy.

“But you can’t put a price on blackgrass control and blackgrass isn’t economical to grow. It’s about getting a balance and being brave.

“You have to be more flexible with your rotation and if you have blackgrass, you can’t be making cropping plans ahead of harvest anymore.

You have to see where it comes up and if delayed drilling isn’t an option, wait until the spring,” says Toby.

Use the full chemistry set

In addition to implementing the rotational changes that contribute cultural control of their blackgrass, Toby and Richard are also throwing all the useful available chemistry at the blackgrass.


That includes robust pre-emergence herbicide applications to all their crops and the acquisition of their own Avadex granule applicator to ensure that they aren’t waiting for contractors at the optimum timing.

Mr Senior (pictured below) says getting the pre-emergence herbicide stacks onto fine seed-beds in a timely manner is crucial to ensure that the expensive investment does the best job possible.

“We don’t want the chance to see what (blackgrass) is there, so in the winter cereals we use Avadex granules followed by a pre-emergence and early post-emergence spray.

“The wheat gets a Vigon + Stomp, followed by a Lexus + Defy mixture, with the barley getting Crystal + Bacara and topped up with Liberator slightly later,” explains Mr Senior.

With herbicide resistance reducing the efficacy of the ALS-inhibiting post-emergence herbicides such as Atlantis on the farm, Mr Senior says its use is kept to a minimum where blackgrass has come through the robust pre-emergence programme.

However, Toby is reluctant to spend the extra £30/ha on a product unlikely to provide value. “I think we are better trying to save the cash and focus on getting the most out of the earlier sprays,” he adds.